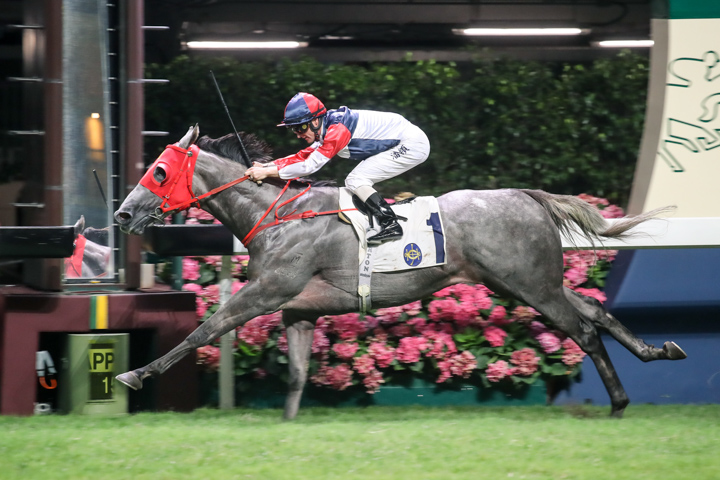 “I finally got the win out of him!” the champion jockey said after collecting the silverware.

Purton’s first ride on Dennis Yip’s charge had delivered a breakthrough victory but that was back in December: four subsequent pairings produced three frustrating seconds and a third-place return.

“I said pre-race he’d been very consistent but he’d had many chances to get that next win and he’s just been throwing his races away, so it was time to try something different,” he said.

“Coming to Happy Valley was a bit of a risk because he’s a quirky horse and the gate (seven) wasn’t ideal with the make-up of the race, so I had to make use of him early. But he got the job done and he’s done it with a big weight (133lb) on his back – it’s not easy to do – so hopefully things click with him a little bit more and he’ll be able to go on with it.”

Purton tracked along on the quarters of the front-running Speedy Luck (119lb), kicked Racing Fighter to the lead upon straightening and went past the post in 1m 10.20s at odds of 3.9. The Australian ace is hopeful that the four-year-old might be able to hold his own in Class 2.

“I think he’s got the ability – he has,” he said. “It’s just a matter of whether he wants to do it. It’s more mental than physical with him.”

And the fact that Racing Fighter raced down the straight without another horse delivering a pressing challenge might have been beneficial too.

“Maybe he’s taken some confidence out of that – I hope so!” Purton added.

That debut seventh was on 7 April, eight months after Hong Kong Bet arrived off a four-race Australian career that included a Listed win.

“He had a setback in the beginning – a fractured splint bone – and that’s why there was a delay with him. We gave him time and everything came back into place,” Cruz revealed.

“He had some decent form in Australia, he’s a decent sprinter, a real 1000-metre type of horse and I think we’ll see him go up the ratings from here.”

Karis Teetan was the man in the plate. The Mauritian believes there is more to come from the Smart Missile gelding.

“It’s a very good win from him because he’s not tough yet, he’s not even ready so the draw today helped us,” he said.

“Tony said to make sure I used him a little bit and I had him out of his comfort zone at the beginning just to get him in a position. Once I took a sit on him I could tell that he was feeling better; when I pulled him out, he had a horse on either side and that helped him focus. I think there’s still a lot of improvement.”

Cruz and Teetan weren’t done yet, though. The pair combined for a double when Brave Legend (132lb) surged wide down the straight to take the concluding Class 3 Arc de Triomphe Champions Handicap (1800m) by a neck from Cinquante Cinq (115lb).

Joao Moreira delivered a dose of magic in the Class 4 France Galop Members’ Department Handicap (1650m). His mount, True Grit (130lb), took a hefty bump on both flanks at the start and was shuffled to second last on the home turn, but the Brazilian was unruffled.

The victory gave trainer John Size his 63rd win of the campaign and extended his lead in the premiership to eight over Frankie Lor and John Moore.

Lui and Ho have been one of the season’s most potent partnerships though and the pair struck in the Class 4 French Racing & Breeding Committee Handicap (1200m). Ho stalked the lead on 2.1 favourite This Is Class, kicking on in the straight to win by three and a half lengths.

Aldo Domeyer is two weeks into his Hong Kong contract and made it three wins so far when Everbrave landed the opener, the Class 4 Deauville August Yearling Sales Handicap (1000m). It was a first local win at the 20th attempt for the Manfred Man-trained five-year-old.

Derek Leung bagged his 21st win of the campaign thanks to the Me Tsui-trained Enjoy Life in the Class 4 Equidia Racing Channel Handicap (1650m).

Hong Kong racing continues at Sha Tin on Saturday 18 May.