Field of ten for Bondi Stakes

A field of ten were accepted on Wednesday for the $1m, Bondi Stakes (1600m) for three-year-old’s at Randwick on Saturday, including two Fastnet Rock’s with leading form around them, the Hawkes’ trained Hilal and Waller trained Coastwatch.

The colt Hilal defeated Coastwatch, a gelding, in the Group 2 Stan Fox Stakes over 1500m at Randwick on October 9th. Back in April Hilal was twice Group 1 placed in first, the ATC Sires’ Produce Stakes over 1400m to Anamoe, and secondly in the Champagne Stakes over 1600m to Captivant.

Prior to the Stan Fox Stakes Coastwatch was third in the Group 1 Golden Rose over 1400m at Rosehill on September 25th to In The Congo and Anamoe.

Godolphin’s Anamoe went forward to win the Group 1 Caulfield Guineas over 1600m at Caulfield on October 9th with the Snowden trained Captivant second, the margin a half-length. Both take their place in the Group 1 WS Cox Plate (2040m) at The Valley on Saturday.

Back at Randwick Hilal has barrier six for Tommy Berry with Coastwatch in nine for Kerrin McEvoy.

The Bondi Stakes is Race 8 on the ten race programme at 4.45pm.

The following race is the fillies and mare’s invitation race, the $2m, The Invitation (1400m) with a field of 12, plus three emergencies.

The Course Proper is rated a Good 4 on Wednesday with the rail out 8m from the 1000m to the Winning Post and 5m for the remainder of the circuit.

Sydney’s weather has showers developing late Wednesday with 10mm possible and 21c, partly cloudy days Thursday and Friday with up to 4mm possible on Thursday with 22c and 23c respectively. Saturday’s forecast is for a mostly sunny morning with late shower to 5mm and 14c to 26c. 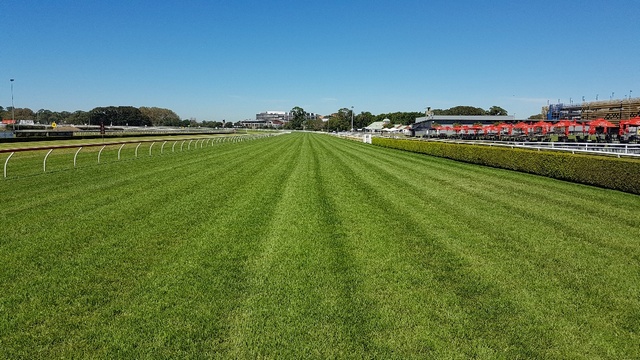 The rail moves from the True position of The Everest meeting at be out 8m from the 1000m to the Winning Post and 5m for the remainder of the circuit, picture ThoroughbredNEWS