Excess Funds has turned around a disappointing display at Flemington on Melbourne Cup day with a strong on-pace win to claim the $150,000 Tonks Plate (1200m) at Ballarat.

The Levi Kavanagh-trained son of Rubick had put in a solid display when finishing second to Coruscate at Caulfield on October 14 but failed to get warm down the straight when tenth to Exhilarates on Melbourne Cup day.

Kavanagh explained Excess Funds had lost a shoe during that race and had pulled-up sore and was expecting the four-year-old to bounce back on Saturday.

In the small field jockey Damian Lane took up the initiative aboard Excess Funds to have the gelding positioned on the speed outside the leader Chicago Club.

Taking the lead soon after straightening, Excess Funds gave a strong kick as Jye McNeil was angling into the clear on Hi Stranger, eventually running out of ground to reel in the winner. 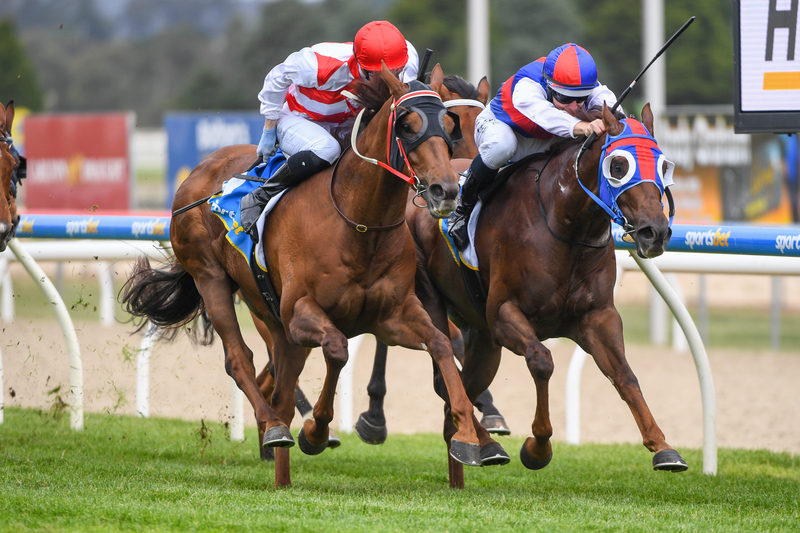 Excess Funds and Damien Lane on the inside hold out Hi Stranger and Jye McNeil outside, picture Racing Photos

“We didn’t see the best of him down the straight on Melbourne Cup day,” Kavanagh said.

“He pulled up having lost a shoe and was a little bit sore so we had to use that as a bit of a forget run.

“His second-up run, that’s the sort of form brought to today.

“It was a great ride by Damien and it was probably against his pattern. Credit to him. He judged the pace well, held the field up and then kicked away.

“I think he’s still improving and we haven’t seen the best of him yet.”

Kavanagh said the Group 3 Standish Handicap (1200m) down the straight at Flemington on New Year’s Day was the likely target.

“He’ll have another run between now and then. Whether we go interstate for that, we’ll see,” he said.