A wet and wintry weekend in Paris has turned the ground at Longchamp to holding and caused a stir in the battle to be favourite, with Enable overhauling Love as market leader for Sunday's Qatar Prix de l'Arc de Triomphe. 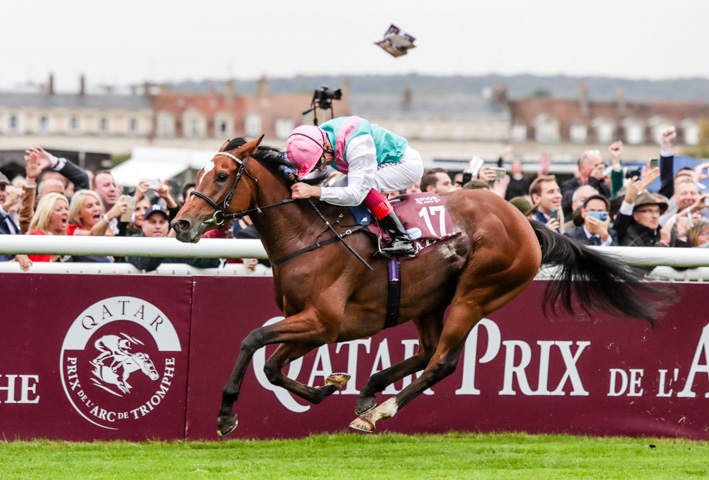 The prospect of testing conditions for the Arc has increased significantly, with the going officially described as very soft (4.0 on the penetrometer) on Monday morning following 19mm of rain in the preceding 24 hours, all but ensuring that the track will be much deeper than on trials day just over a fortnight ago.

The outlook for the seven days leading up to Enable's second bid for an Arc hat-trick is unsettled, with the potential for more rainfall on Friday, while there is very little in the way of sunshine expected throughout the week.

Very soft was also the going description 12 months ago when Enable was reeled in late on by Waldgeist on her first attempt to become the first three-time winner in the race's history.

That defeat a year ago has not stopped most bookmakers changing favourites on Monday as the first forfeit stage passed, with 22 runners standing their ground prior to later forfeit stages this week and the supplementary stage on Wednesday.

Enable has shortened from as much as 5-2 on Sunday night to 13-8 favourite with Paddy Power and Betfair Sportsbook, with Love, who is not proven in testing conditions, pushed out to as big as 85-40.

Monday's ground update and forfeit stage has also coinciding with Enable's stablemate Stradivarius shortening in the ante-post market too, with Bjorn Nielsen's superstar stayer cut into 8-1 (from 12) the day after the jockey booking of Olivier Peslier was confirmed.

Coral have also made Enable their clear 7-4 favourite and spokesman David Stevens said: "With the Longchamp going already very soft, and Paris set for an unsettled week, Love may well not get the ground she needs to be at her very best on Sunday. As a result, Enable has regained favouritism from her younger rival, with her stablemate Stradivarius also popular with punters following the booking of Olivier Peslier."

While very soft or even heavy conditions would be an unknown for a number of leading fancies, recent history suggests testing ground does lessen the impact of the draw.

Of the 22 Arcs run at Longchamp since 1996, eight have been contested on ground described as soft or worse.

During that period four horses have triumphed from a double-figure draw, with three of those – Sakhee in 2001, Dalakhani in 2003 and Treve in 2013 – coming on rain-softened ground.

Grounds for concern?
Testing conditions at Longchamp would present a test to Love, the 1,000 Guineas and Oaks winner who had been the longtime ante-post favourite for the Arc prior to Monday's market movements.

Love has won six of her ten races but has been beaten on all three of her starts where yielding or soft crept into the going description, albeit those defeats came in her two-year-old season.

She has never tackled softer than yielding ground in her career and, speaking after her five-length win in the Yorkshire Oaks, Aidan O'Brien sounded a cautious note on the suitability of a softer surface for the outstanding three-year-old filly of her generation.

O'Brien said after her win at York on ground official described as good: "We were very nervous about running her in the ground because any time she got beat last year was in slower ground.

"The advantage of running her in that ground was we would find out if we could run her on that sort of surface in the Arc.

"I'd be very worried if we get stinking ground in France because she's low-actioned. We now know she can get away with good to soft but I wouldn't be sure about heavy."