Duais on target for Caulfield Cup

Duais will be out to break a hoodoo of more than 120 years when she lines up in the Caulfield Cup on Saturday.

The Edward Cummings-trained mare won the Group 3 Coongy Cup (2000m) at Caulfield on Wednesday as her final lead-up to the $5 million feature. With the Caulfield Cup dating back to 1879, only two horses have won the Coongy Cup and then gone on to win the Cup — Paris (1894) and Hymettus (1898).

The closest a horse has come in the modern era was Circles Of Gold who took out the Coongy in 1996, only to be beaten three days later into second place by Arctic Scent in the Caulfield Cup.

Runner-up in the Australian Oaks (2400m) at Randwick in the autumn before winning the Group 1 Queensland Oaks (2200m) at Eagle Farm, Duais has been set specifically for Saturday's race. Rather than give the mare a gallop at Caulfield, Cummings decided a race would be more beneficial.

With Cup jockey Michael Dee aboard, Duais ($11) defeated Wentwood ($16) by a head, with the $1.55 favourite Floating Artist (GB) a short-head away third.

Dee galloped Duais last Saturday and said the mare would strip very fit for her assignment on Saturday.

"I don't think she'd blow a candle out at the minute. She's very fit and seems to have pulled up well and we'll go in three days' time," Dee said.

"But it is all about the barrier draw and we won't know that until later on. If she draws a gate then she can position up midfield, but is she draws wide then she'll probably just take her usual pattern and most definitely be in the second-half of the field.

"She's got a great turn-of-foot, so she makes my job easy. She's adaptable and doesn't pull, but she travels nicely on the bridle and she's there when you ask."

The hopes of Floating Artist (GB) making a late bid to secure a Caulfield Cup start were dashed with his third-place finish. Jockey Teo Nugent said the import was brave at his first run in a stakes race. 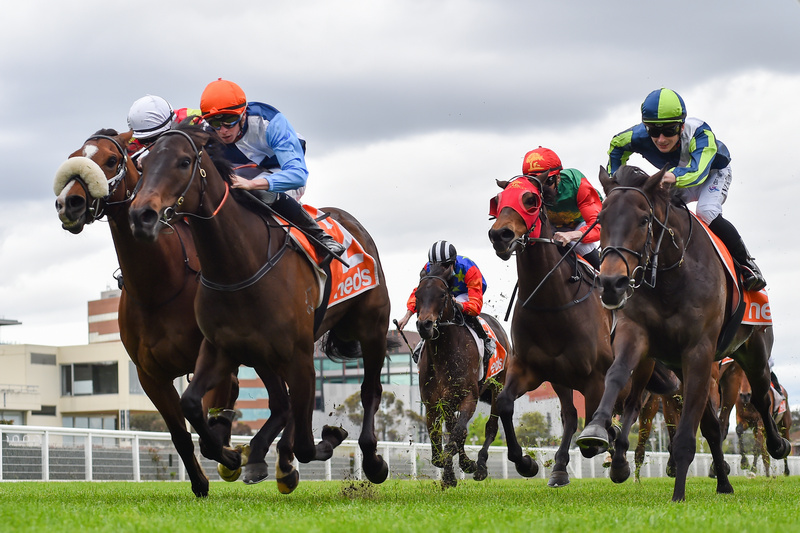 Duais, with Michael Dee up, will back-up in the Caulfield Cup after taking out the Coongy, picture Racing Photos