Gaon Champ gave everything but ultimately Do Kki Blade was just too strong as the sprinting pair turned the KOR Grade 3 Busan Ilbo Cup (1200m) into a two-horse war at Busan on Sunday.

Do Kki Blade and Gaon Champ finished 2nd and 3rd behind Simjangui Godong in a blanket finish to January’s Segye Ilbo Cup at Seoul. While that day’s winner was also present on the south coast today, along with a vast amount of the nation’s sprinting talent, it quickly became clear that only two horses were going to dispute the finish.

Gaon Champ and Alan Munro briefly managed to get on terms and almost touch the lead in the final furlong, but  Kim Yong-geun was able to extract another effort from Do Kki Blade and the four-year-old ultimately pulled clear to take the line half a length in front of his rival. King Of Glory came home 3rd a further three lengths in arrears, while Simjangui Godong could only manage 6th.

“I’m very proud of him” winning jockey Kim told KRBC after the race. “Coming in he was still a class 2 horse with the lowest rating in the race, but he was going up against all the established class 1 sprinters. Then to make it worse he got the really bad draw in gate 14.” 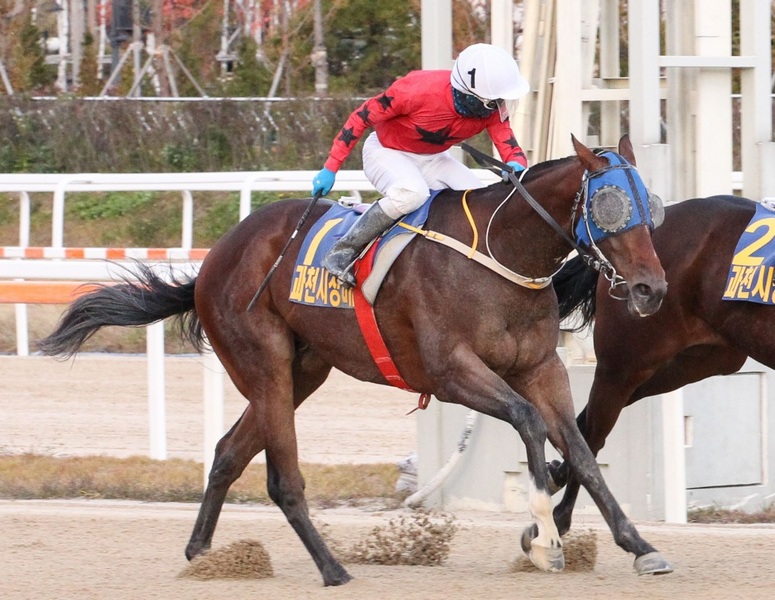 Kim, who was winning the race for the first time despite having ridden at Busan for most of his career before relocating to Seoul three years ago, knew the start would be important: “I felt there was a lot of speed in the race so I couldn’t afford to be chasing but then he jumped out so well and I saw we had a chance to get across so I decided to go for it. Once we hit the straight, I knew he had plenty left.”

Veteran trainer Park Dae-heung, who last year finally captured a Korean Derby with Wonderful Fly, was also winning the race for the first time and he was full of praise for his jockey: “I thought the race could be lost at the start so I was disappointed with the draw. I told Kim Yong-geun it was up to him to use his judgement and he did it perfectly.”

The Busan Ilbo Cup, like all racing in Korea at the moment, was held behind closed doors and with the absence of any legal remote betting in Korea, local fans were completely shut out and unable to even watch the race on TV. Both winning jockey and trainer addressed that situation.

“I value this win of course” said Kim Yong-geun. “It would have been far more exciting if we could have had our fans inside the racecourse though. I felt this was a very good race and I would have loved for them to have been able to watch it live. (Covid-19) has been hard on all of us but I keep the fans in my mind all the time.”

Trainer Park echoed those sentiments: “I have had a lot of time to think during the shutdown and I realise how important our racing fans are. Just to be racing is a start and we must do it, but it isn’t the same. I want all our fans to know we race for them and want to see them soon.”

Gaon Champ will get his chance for revenge on Do KKi Blade when the Sprint Series heads up to Seoul for the SBS Sports Sprint in July, a race which will be the final tune-up for September’s International Group 3 Korea Sprint.

* At Busan on Friday, the star of the show was Pro Consul. The Peter Wolsley trained colt has had an interrupted career but looked superb when dominating a class 1 field in the concluding Mile Handicap, winning by a full eight-lengths under Seo Seung-un. Pro Consul is a US import by Freedom Child, who was himself imported to Korea earlier this year. The four-year-old moves on to five wins from nine starts and into contention for big races later this year.