The 2000-metre journey of the McKell Cup will present different challenges for a pair of stablemates, but their trainer remains hopeful one of them can come away with a win. Pre-race favourite Stockman will have to handle a significant distance drop, while for stablemate Brutality, it is a rise in journey that presents unchartered waters as he extends beyond a mile for the first time.

Stockman is coming off a solid third over 2400m in the Winter Cup two weeks ago and with plans to back him up in next Saturday’s Stayer’s Cup (3200m) at Randwick, trainer Joe Pride admits Saturday’s race presents an interesting conundrum.

“Coming back from 2400 for him won’t be easy because he is quite dour, but a wet track will offset that to some degree,” Pride said.

“He just needs to wind up and the other day when he was trying to wind up, he went up the inside and got chopped out.

“He’s drawn one again here, which probably doesn’t do him any favours, but the wet tracks are the key to him. He loves them.” 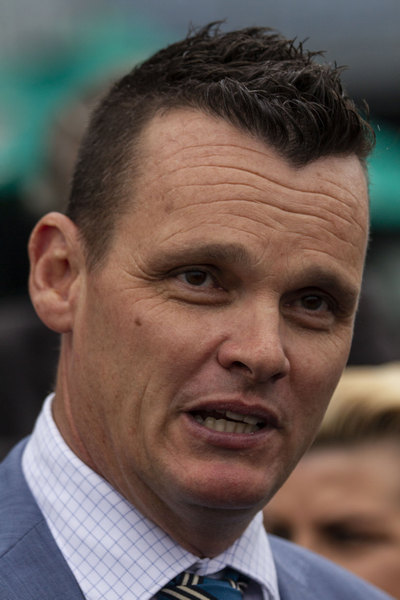 Pride is double handed in the McKell Cup, picture sportpix.com.au

Stockman was a $4.60 TAB fixed odds favourite on Friday, with Brutality at $10. But Pride can make a case for his underdog. The gelding backs up from a fourth over 1600m at Randwick last weekend in what is a proven formula for the horse.

“I’ve run him three times with less than two weeks between runs and he’s won all three of them, and he’s on the back-up here. I think punters will work that out and he’ll start a bit shorter than what he is now,” Pride said.

“He’s got to run the 2000 metres, but he’s got an electric turn of foot on him. A lot sharper turn of foot than a lot of these.

“He might just be a miler, but he’s always strong through the line over a mile. So you’ve got to find out at some point and I thought this was a nice opportunity to do it with a light weight on his back, a wet track and on the back up.”

Rosehill was rated a Heavy 8 on Friday with rain forecast overnight and on race day.