Churchill gave his Singapore Derby aspirations no harm with a display of outstanding resilience in the $70,000 Class 3 Division 1 race over 1200m at Karnji on Sunday.

That second Kranji win was highly reminiscent of his first Kranji win in a Class 4 event over 1400m second-up on February 28. That night, from a wide alley as well, he had to press on for most of the backstraight under jockey Vlad Duric before finding the lead and going on to score.

If that win was all guts and glory, multiply that factor by at least five for Sunday’s win. With replacement jockey Ryan Munger up (Duric could not make the weight and rode Hugo, whose own jockey Noh Senari was stood down for a back issue), the strapping galloper was caught five to six deep for almost two thirds of the speed dash! 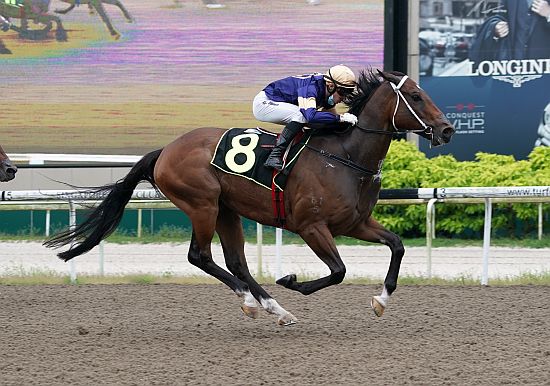 With well-fancied rivals like Surge (Ruan Maia), Hugo and Filibuster (Juan Paul van der Merwe) on his inside, most thought Churchill would show the white flag upon straightening, but that was underestimating Ricardo Le Grange’s bulldog!

It soon became evident that Churchill ($17) had actually only been humming along despite his scenic route on the outskirts. Once Munger popped the question, the game galloper went through his gears, actually skipping clear by two lengths when he was entitled to get the staggers.

Those who had run along on his inside were the one who were running on fumes instead while the swoopers could not pull much ground off him either. In the end it was the fast-finishing Beau Geste (Hakim Kamaruddin) who won the fight for the minors one and a half-length away, a head clear of Chocante (A’Isisuhairi Kasim).

The run of the race has to be Absolvido (Simon Kok Wei Hoong) who after tailing off badly, stormed home to just miss fourth place by a nose to Ironside (Benny Woodworth). The winning time was 1min 11.97secs for the 1200m on the Polytrack.

With that second success, Churchill, a former Sydney one-time winner (1350m at Wyong) when known as Front Sight and prepared by Newcastle trainer Kris Lees, has bulged his win account to come just under the $75,000 mark for The Racing Club headed by iRace boss Steve Levar.

After such an odds-defying run, connections would have every reason to harbour loftier dreams for the Smart Missile four-year-old, namely the Group 1 Singapore Derby (1800m) on September 6. It was a feature race he had been aimed at anyway before COVID-19, and now that it is open to five-year-olds and it will be staged on September 6, he is still eligible.

“It was a big, big win. He’s a big horse who was drawn out and Ryan used his stride to go forward,” said Le Grange who was capping a great day at the office with a training treble after Sweet Angeline and Gold Prize scored earlier (see previous report).

“Unfortunately, the horses kicked up on his inside and Ryan didn’t want to break his momentum. That horse has both class and courage.

“I’ll have a chat with Steve, but the Derby would definitely be a race to look at for him.”

Le Grange felt sorry for Duric – who earlier won aboard the other Levar-owned Sweet Angeline - he had to give way on a winning ride, but that is part and parcel of the racing game.

“Obviously, one man’s loss was another man’s gain. Vlad could not take the ride and Ryan got the job done,” said Le Grange.

“Ryan’s gone through a rough patch, especially during the break, and it’s great to see him ride two winners for me today.”

Last but not least, Le Grange dedicated that hat-trick of wins to his father Jack who is currently recovering from a surgery.

“I’d like to spare a special thought to my Dad, who had surgery in the US yesterday. This one is for you Dad, and here’s to wishing you a speedy recovery.”