A beaten favourite on debut usually puts punters off, but South Of The River’s pulsating win second-up at Kranji on Saturday proved that such flops should not be written off too soon at times.

After a weakening ninth as the hotpot in a Novice race on 1200m turf at his first Kranji assignment on November 14, South Of The River didn’t take long to reassure connections that they had not been saddled with a dud.

He did bounce back with a 12-length barrier trial win six weeks later, but some knockers may still argue it proves nothing as only a real race is the litmus test, but the Statue Of Liberty four-year-old’s romp was so impressive this time that his prohibitive $7 odds before Saturday’s $20,000 Open Maiden race over 1000m were a clear indication they were prepared to forgive his first run. 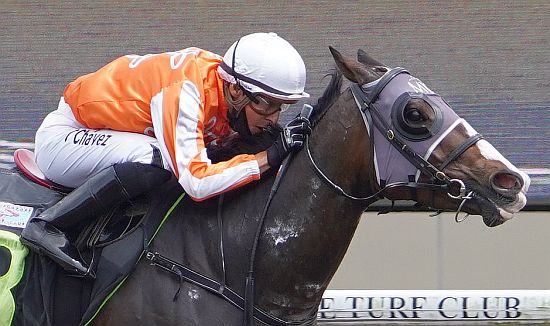 Punters and connections alike were not disappointed this time around. South Of The River showed that his sparkling trial form was no flash in the pan with an almost carbon-copy demolition job.

Ridden by Oscar Chavez (debut partner Louis-Philippe Beuzelin is suspended and trial partner Manoel Nunes went for Gold Cut), South Of The River led out from main danger and favourite Gold Cut with newcomer Fabu (Koh Teck Huat) and Tesoro Pirata (Marc Lerner) next in the running line – and that was the shape of things to come in the end.

The first four finished in that order with the only difference the winning margin. South Of The River hosed up by seven lengths from Gold Cut, who just beat Fabu to second place by a nose. Tesoro Pirata took fourth place another length away.

South Of The River ran the Polytrack 1000m in the smart time of 58.46secs, which is only 0.76 second outside the record held by all-weather champion Nova Swiss.

Winning trainer Michael Clements was at a loss to explain why South Of The River fluffed his lines at his first race, but did hazard three guesses to account for the radical improvement on Saturday.

“I think there is a combination of three reasons to today’s win,” said the 2020 Singapore champion trainer.

“He benefitted from that first run, I think he also enjoyed the Polytrack, and the blinkers helped.

“He’s very green and has a nervous disposition. Normally blinkers are meant to wake horses up, but they help him settle and concentrate better, he was also a lot more focused.

“He showed so much that we felt he would win first-up. We prepared him for that run and we were reasonably confident he would go well.

“But he was pretty plain on the turf. There was absolutely no problem from that first run, but he just seems to act so much better on Polytrack, and I also think he took out a lot of that first run in terms of fitness and experience.

“We carried on with his preparation and today, he was excellent, and we saw what we expected first-up.”

The Greenwood Stable is a new outfit Clements just welcomed to his fold, and was delighted their first purchase could be something out of the box.

“I think there are some owners who had shares in horses around here, but not with me. They are new owners to me and they bought that horse from a Victoria barrier trial via some friend of theirs,” said Clements.

“They did put that trial past me for my go-ahead and I did tell them from the way he trialled, he had quite a lot of speed and should be a horse that would suit Singapore.”