Tivic Stable seems to have unearthed yet another quality galloper in Dancing Light following an impressive debut win at Kranji on Saturday.

The three-year-old son of Street Boss cost A$200,000 as a yearling at the Inglis Melbourne Premier Yearling Sale in 2020, and has quickly shown trainer Tim Fitzsimmons and the owners of past greats like Stepitup and Bold Thruster, it was money well spent from Day 1.

“He’s the perfect type, even if he has a few mental quirks,” said Fitzsimmons. 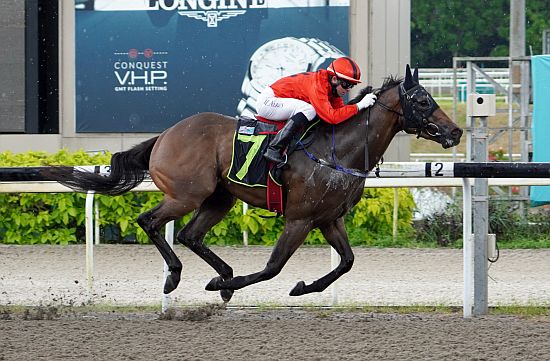 “I’ve taken him along slowly and he’s been coping well with all his work. He’s quite a nervous horse, and can get a bit hot, but all things considered, he wasn’t too bad in the parade ring at his first start.

“For sure he’s not been an easy horse to train as he’s also had a few minor issues, but we’ve been able to bring him along slowly.

“Manoel (Nunes) has done a lot of work with him in December when a lot of the jockeys had gone home. He rode him very well, and told me he won on raw ability today, he’s still very green.

“Once Manoel got him to change his legs at the top of the straight, he found the line very well.

“I’m really thankful to the Tivic Stable for the opportunity to train this well-bred specimen that Peter Twomey bought for A$200,000 as a yearling.”

With the purse of $75,000 up for grabs in those Restricted Maidens, Dancing Light has already recouped around a fifth ($40,000) of his price tag with that maiden victory in the Polytrack 1100m event.

The win also handed Nunes his first win in 2022 after sitting out the kickoff meeting on January 2 because of a one-day careless riding suspension.

After a three-year absence at Kranji, the former three-time Singapore champion jockey ran rings at his riding comeback at the last month (November) of the racing calendar with a remarkable record of eight winners in only 32 rides on the board, which many read as a foretaste of what could well be his season this year.

The Brazilian ace was indeed at his frontrunning best in the way he bounced Dancing Light ($16) out to the front, and then saved him for that last dash inside the last 400m on his way towards a 1 ¼-length win from Big Green Hat (Oscar Chavez) with another debutant Deception (Marc Lerner) third another neck away, just ahead of Dabble (Matthew Kellady) by a short head.

As for Fitzsimmons, with whom Nunes had already forged a successful association with four winners (half of his tally of eight) at that one-month stint, Dancing Light’s win ties the Australian with Stephen Gray on two winners. Cliff Brown's former assistant-trainer, who, since his Kranji debut in 2019, enjoyed his best season last year with a fourth finish on the trainer’s log on 33 winners, opened his 2022 account with Den Of Thieves in the last race of the opening day.