Dame Giselle claims the first running of the Golden Gift

The familiar colours of Sir Owen Glenn earned a major chunk of the $1,000,000 prizemoney associated with the initial running of the Golden Gift (1100m) at Rosehill Gardens in Sydney, when seen sported by the first and third in the feature juvenile event in the form of Dame Giselle (by I Am Invincible) and Blaze A Trail (by Criterion) respectively.

Two of 14 starters in the newly created 2-year-old attraction of the Sydney spring racing period, the same set of colours looked to have the race won virtually every step of the way, Blaze A Trail racing prominently during the early stanza of the essay before Dame Giselle chimed in late in the straight to dominate the finish.

Splitting the two on the line proved to be the fast finishing See You Soon (by Siyouni) after being dropped out and ridden at the tail of the field immediately after the break, and then hitting the winning post strongly over the concluding stages.

In a highly intriguing new feature to Sydney racing, the Golden Gift provided no shortage of side stories, but none more fascinating than the participation of Sir Owen Glenn’s two representatives.

A first-crop son of the breeder-owner’s fertility challenged sire Criterion, Blaze A Trail ran an absolute blinder at his first race start, showing abundant speed to race on the pace before feeling the pinch late in the straight.

The winner, a $500,000 yearling purchase produced by the former outstanding race filly Ballet Society (Stravinsky (USA)), prospered most from the fast early pace, going one better than her second place on debut to score going away.

Significantly, Dame Giselle had finished runner-up to See You Soon on debut, the two fillies reversing the finishing order on this occasion. 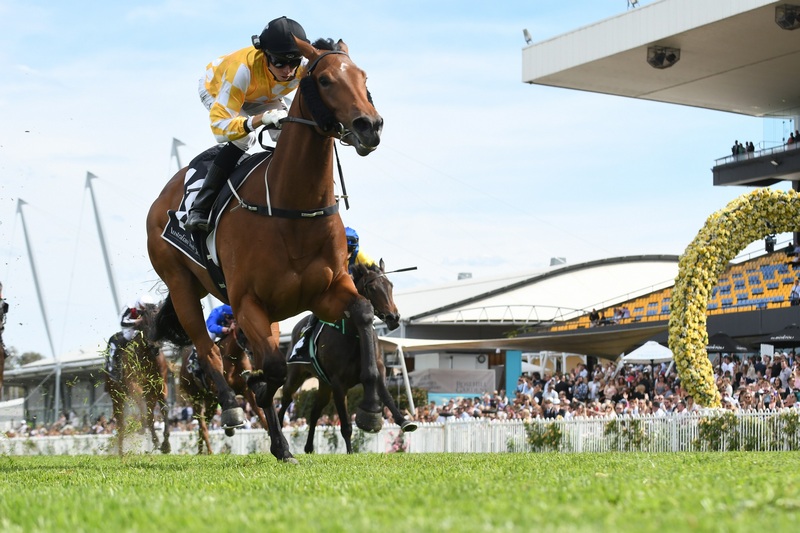 Speaking after the race, winning co-trainer Peter Snowden said: “She did a great job. You can’t beat race experience and that’s what she lacked the other day. I thought she would improve off that.

“We’ve always liked her from Day One. From the very first time she showed something and always had that good demeanour, which I love about a two-year-old. She was athletic and a great mover.

“The staff picked her out and the riders picked her out. She gave us a good feel early and I thought she was stiff not to win first-up, so it’s good to get this result.

“She can have a well-earned rest now, poke her way back and only run in the races [on the way to the Golden Slipper] we need to. She might only need one run leading into the Slipper. We’ll let the dust settle and that decision will be made later on.”

Snowden also saddled-up Blaze A Trail and remarked on his performance: “Very brave. He probably over-raced a bit early.

“I’m glad he ran third, because the prizemoney is going to make sure he gets into the right races. You’ll be hearing more of him for sure. He’s only going to get better and he will improve a lot.”

Dame Giselle was ridden to victory by Andrew Atkins, who claimed after the win: “It felt fantastic. She put the writing on the wall last start, narrowly getting beaten, and she put up a great effort doing that. Coming here today I was full of confidence — I couldn’t believe the price she went up.”

Adkins added: “What a training performance. Peter and Paul had her primed. When I pulled her up it was like she hadn’t even been around. To have a 2-year-old that fit, that ready to go, and that on the ball… What a thrill!”

Dame Giselle won by three and three-quarter lengths from See You Soon, who in turn finished a short-head ahead of Blaze A Trail.

Dame Giselle is officially raced by Go Bloodstock Australia (Mgr: Sir O G Glenn) in addition with the China Horse Club Racing Pty Ltd (Mgr: A K Teo). After just two starts, the daughter of I Am Invincible is already the winner of $604,000.

Ben Allen (Tanker): “We jumped a bit awkward. We held a spot on him. He didn’t corner that well at all and that was why he was able to get out. He wasn’t comfortable and I think he felt the track a bit as well.”

Jay Ford (Endorse): “From the wide gate he found himself three wide on the speed. Once he got into the straight he came out of it pretty quickly.”

James Doyle (Gravina): “Tricky draw. It felt to me like his mind wasn’t 100% on the game today. As a result we just got pushed wider and wider. He just wasn’t at the races today.”

Blaike McDougall (Itzhot): “He went super. Very green. I was going to come around them but I had the favourites back (Tanker) so I followed him through and then I ran out of a bit of room there. He is a nice horse going forward over seven and eight furlongs. He has got a fair way to go but he has got plenty of ability.”

Koby Jennings (Murungal): “We landed into a gem of a spot but he just got lost once they stepped it up. He got on the wrong leg. It was a big learning curve for him.”

Tim Clark (Blaze A Trail): “He did a really good job in his first start. He just overraced a little bit in the middle stages. I was desperate to come back and sit off the leader but he just wanted to do too much. He got tired late because of that.”

Rachel King (Malkovich): “He was right there until the furlong but just weakened out of it a little bit. He is probably a preparation away.”

Keagan Latham (Sidearm): “He was very, very green. He came home really, really well. He got a little bit of a bump early on and it just took him off his balance a bit. He is definitely a horse for the future.”

Jean Van Overmeire (See You Soon): “She is a very good horse. We didn’t get all of the luck we needed. We had to weave through the field. She never really got into a good rhythm. In the closing stages she had a lot more to offer.”

Tommy Berry (Close To Me): “Had a nice run and presented like we were going to be right there in the finish late but probably a preparation away.”

Robbie Dolan (Cellsabeel): “I wish we drew a gate, we would have been right there in the finish. She is a lovely horse. She just got back and got a bit of cover. We cut the corner and got to the other side and she really stormed home. She is only going to get better.”