Daahyeh is favourite to give David Egan a second career success at Group 2 level in the Duchess Of Cambridge Stakes at Newmarket, with the Roger Varian-trained filly bidding to become the fifth Albany Stakes winner to follow up at Newmarket.

Illuminate was the most recent of the previous quartet to do the double in 2015, although Main Edition came unstuck when fancied to repeat the sequence a year ago.

A daughter of Bated Breath, Daahyeh could be called the winner some way out at Ascot, where she was sent off favourite and duly accounted for today's rival Celtic Beauty and 23 others. 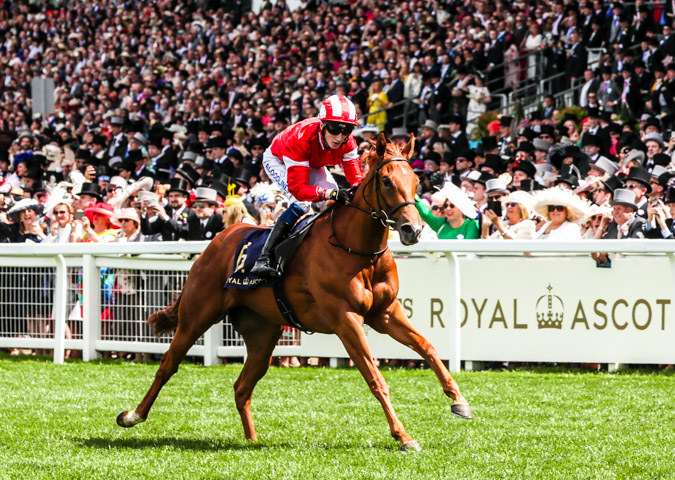 Prior to her Royal Ascot triumph, the Bahraini-owned filly was equally impressive when scoring on her debut on the Rowley Mile in May, accounting for another of today's opponents, Raffle Prize.

The experience of similar undulations should stand Daahyeh in good stead as she aims to give trainer Varian a first win in the race.

Jockey Egan, whose only previous win at this level was on Pilaster in the Lillie Langtry Stakes at Goodwood last year, said: "Daahyeh is improving with experience and was impressive at Royal Ascot. She's come out of that in good shape and she's won on the Rowley Mile, which will be a big help as the tracks are similar."

Varian added: "Daahyeh is in great form. I’ve been happy with her since Ascot, she’s trained well into this race and is very straightforward. She has a good mind and is a very relaxed filly, and we’re excited about running her again."

The last filly to complete the Queen Mary/Duchess Of Cambridge double could be an omen as it was the Mark Johnston-trained Attraction back in 2003.

The daughter of Slade Power had previously run twice at this trip when chasing home Daahyeh and then when winning her maiden by five lengths at Chester.

One drawback could be the 3lb penalty she picks up for her Group 2 win at the royal meeting.

Charlie Johnston, assistant to Mark Johnston, said: "Raffle Prize has come out of her Royal Ascot win in good shape. This looks a very good renewal and she steps up to six furlongs and carries a penalty, which won't be easy.

"She'll have to run right up to the level of her Ascot win, if not higher, but it was the obvious race for her and she should run a big race."

Final Song is one of two Godolphin-owned runners and has a length and a quarter to find with Raffle Prize on their running in the Queen Mary Stakes.

The daughter of Dark Angel is a rare ride in the blue colours for Ryan Moore and was sent off favourite at Royal Ascot on account of her previous easy win in a 5f maiden at the Berkshire course.

Although she has yet to race over this far, the Saeed bin Suroor-trained juvenile shapes as if it should play to her strengths.

Bin Suroor said: “Final Song ran a very good race in the Queen Mary Stakes and came out of Royal Ascot well. This is another tough race, but she has the class and has been working nicely. I'm hoping for a good result.”

What The Others Say

David Simcock, trainer of Bredenbury
It's a step up in class in what is a strong renewal, but she's not a bad filly and this will tell us more about her.

Ken Condon, trainer of Celtic Beauty
We were delighted with her run in the Albany. She came out of the race well and we're very happy with her. The July course is an easier six furlongs than Ascot and I think that and the quicker ground will suit her.

Charlie Appleby, trainer of Divine Spirit
We're putting a line through Divine Spirit’s run in the Queen Mary Stakes because the ground turned quite slow with all the rain. She's back racing on a sound surface and the step up to six furlongs is another positive. It looks a strong renewal, but Divine Spirit won very well on debut at Windsor and we're looking forward to seeing how she goes over this distance.

David Redvers, racing manager to Sheikh Fahad, owner of Lambeth Walk
She has plenty of experience and it looks a hell of a tough race, but she should appreciate this quicker ground.