Ireland’s Willie Mullins was making plans for twelve months hence the moment that True Self (IRE) made light work of the $300,000, Group 3 Queen Elizabeth Stakes (2600m) at Flemington on Saturday to run the seven-year-old mare at Flemington again, but on Tuesday this time.

True Self was second in the Group 3 Geelong Cup over 2400m on October 23rd, missing a guaranteed slot in the Group 1 Melbourne Cup over 3200m last Tuesday. However the consolation prize of the Queen Elizabeth Stakes surely franked the form with the winner at Geelong, Prince Of Arran (GB), second in the Cup and now heading to the Group 1 Japan Cup (2400m) at Tokyo on November 24th. Note - news came through late Saturday afternoon that Prince Of Arran will not be travelling to Japan as barrier blankets are not permitted.

Ryan Moore had True Self (56.5kg) settled mid-field through the slow, early sectionals and then it was a matter of finding passage once into the main straight. Moore accomplished that at the 250m and then it was a smooth progression to the line without the rest of the field making any ground on the winner. 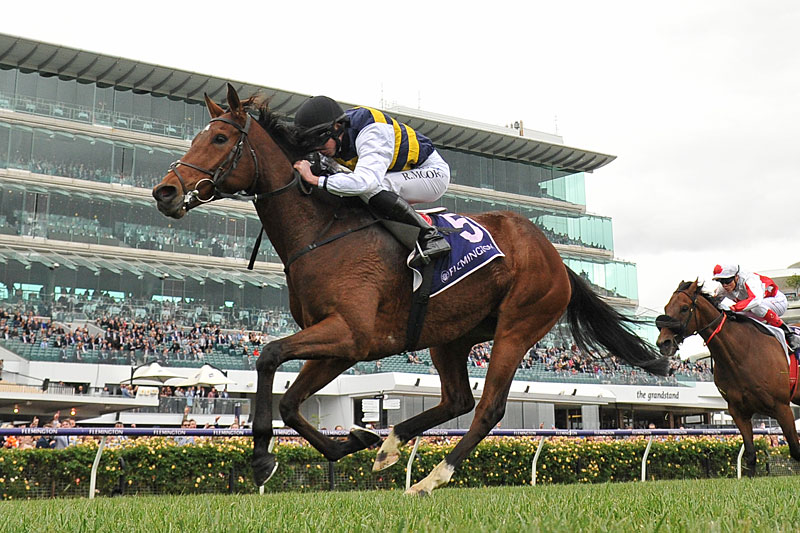 “(The) reports (from foreman Dave) on the telephone about how well she has been going have been correct. On her jumping form, she stays very well,” said Mullins.

“We are surprised how much speed she has shown on the flat and I think we can readjust it so there is a good chance she’ll be back in 12 months-time to run on the Tuesday rather than the Saturday," he said.

“I had a lot of horse. She travelled very, very well. When we started going through the gears she travelled all over them really and only needed a tiny bit of space and she picked up very well,” said Moore.

“I just wanted to have her comfortable and in a nice spot. The pace was very slow for the first half of the race, we only started rolling from the 1000m I suppose. She showed a lot of pace, she was very comfortable as we were quickening, and she was just too good.”

“She stays but she is certainly no slug,” he said.

True Self, by Oscar out of the Mukaddamah mare Good Thought, has won nine from 20 starts with two of those wins over jumps. Owned by O T I ‘s True Self Syndicate and the Three Mile House Partnership of well known UK jumps owner Andrew Gemmell, stakes for True Self have now risen to $751,122 with the $180,000 first prize money from Saturday. Gemmell owns champion hurdler Paisley Park.