A weather plagued Melbourne Cup Carnival was hit again on VRC Oaks Day on Thursday with the crowd of 57,296 the lowest in 25 years. The forecast rain arrived during the nine race programme along with mid-teen temperatures.

Instead of a hoped for warm spring twilight meeting, the first time this has been tried, with the first race run at 1.50pm, the feature Oaks at 5.50pm and the final race at 6.25pm, if there had been floodights for the course proper they may well have been in use over the latter stages of the meeting. The forecast had been well signaled in the media so this must have had an impact.

All the three days so far of the Carnival have had lower crowd numbers with Victoria Derby Day last Saturday attracting 80,214 and Melbourne Cup Day 81,408. The Derby figure was more than 10,000 down on last year and the lowest crowd since 1999 while Cup Day was some 1000 down from the 2018 figure and the lowest crowd since 1995. Other factors involved in the crowd numbers must include the recent publicity on horse welfare, a low spending economy and the high price of attending feature racedays through ticket purchase and on course spending.

Regretfully for the Victoria Racing Club the weather forecast for VRC Sprint Classic Day on Saturday is no better with 14c and a high chance of showers. 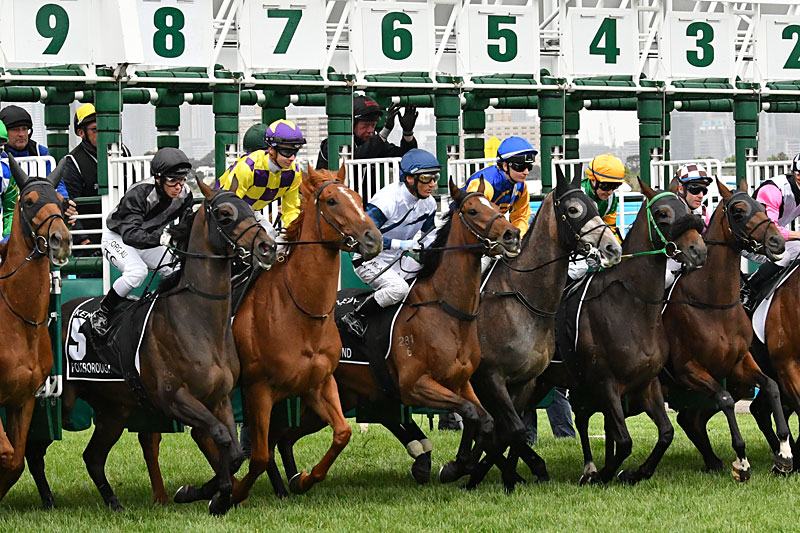 The start of the Group 1 VRC Oaks at 5.50pm with the winner Miami Bound (NZ) leaving from barrier 8 (white and blue cap) with the CBD in the background obscured by rain, picture Quentinjlang.com