Regarded as one of the main challengers to the leader Manoel Nunes going into the second Leg of the 2019 Attitude Hotels International Jockeys’ Weekend in Mauritius on Sunday, Jason Collett could, in the end, only finish fourth.

Coming off a prolific first day on Saturday when he notched two wins on Ovation Award and Silver Song to sit in second place, only five wins off Nunes, the Sydney-based New Zealand jockey saw his odds shorten to start among the favourites for the overall title.

It was game on as six more rides loomed on Sunday, but Collett could, however, only muster four more points (for a second aboard Redwood Valley), eventually sliding off to fourth place on 23 points, 29 points off the overall championship winner Nunes.

An even bigger disappointment was to afflict the other jockey representing the antipodes, John Powell.

Like Collett, the Australian jockey, who flew the Singapore banner in a nod to his Kranji home base, enjoyed a good first day at the office with one winner in Carlton Heights, but his score of 11 points never got a chance to improve.

Powell was stood down on Sunday on medical grounds. He eventually dropped from eighth place to 10th place. 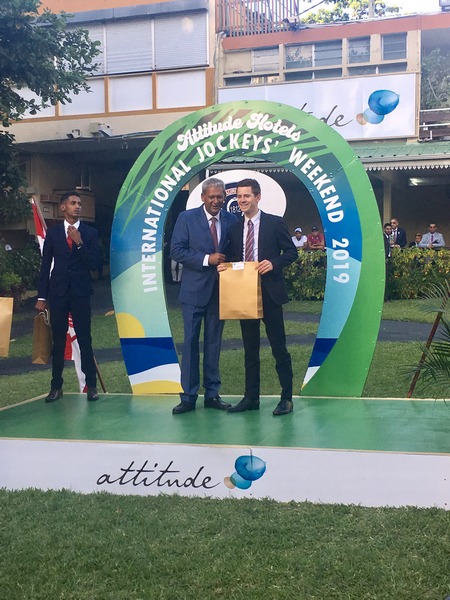 Though Collett’s performance has gained a few new fans on the Indian Ocean island, one could still sense a bittersweet feeling of “it could have been better” in the young Kiwi.

“I got a couple of winners, can’t complain. I gave it a go and it was a really good experience,” said Collett.

“I had two nice chances at the start of today. The first one (Redwood Valley) ran an unlucky second while the other one (Divine Connection) loomed up and I thought he could win, but he bled.

“I fly back to Sydney on Tuesday. It’s pretty quiet at this time of the year.

“There is a Group 2 race on Saturday week, an Open Handicap race, and I may also be looking at the option of riding at the Magic Millions races in January.”

The final standings to the IJW 2019 is as follows: