Clements not quite over the Moon yet

Michael Clements was expecting to see a little more from recent stable transfer Moon Face at the barrier trials at Kranji on Tuesday, but the Singapore champion trainer will hold off on judgement for now.

The precocious Argentinian-bred two-time winner (Polytrack 1200m) was at his second barrier trial for Clements since moving from Australian trainer Cliff Brown, who called time on a 13-year-career at Kranji last month.

After coming out tops at his first trial on March 11, a double dose was coming the Argentinian-bred four-year-old’s way on Tuesday when he spun the bend locked with joint-leader Valorous (Marc Lerner), all loaded and ready to be sling shot. 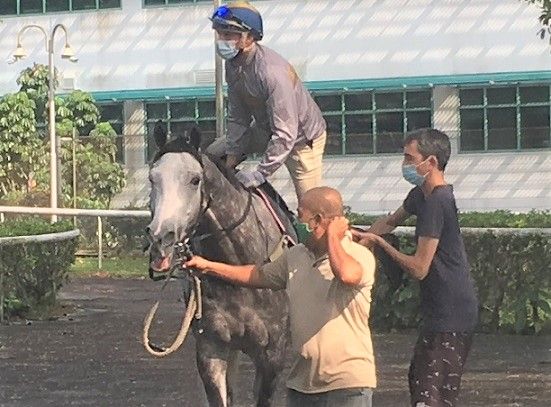 Assistant-trainer Michael White is on hand to give Louis-Philippe Beuzelin a leg-up aboard Moon Face, picture Singapore Turf Club

But instead of ghosting past, the grey went up on the one spot despite being niggled at. Aftermath (Saimee Jumaat), who had followed in the leaders’ slipstream from the start, was the one who set upon Valorous to grab him right on the line.

A one-paced Moon Face ran third around two and a half lengths astern.

On face value and in relation to his impressive two wins, and even his first barrier trial, the run may have looked plain, but Clements was prepared to give the son of Zensational the benefit of the doubt.

“I think he was in a relaxed mode this morning. He didn’t seem to stoke himself up,” said the Zimbabwean-born.

“To be honest, I haven’t spoken to Cliff about this horse as I thought he was pretty straightforward.

“Hopefully, on raceday, he will travel into it a lot better. He may be a horse who saves himself for raceday.”

Clements has picked out the Class 3 race over 1100m next Sunday as his comeback race. At one stage he thought of a turf race first-up, but swayed towards the tried and tested in the end.

“I was looking at a comeback on turf, but I decided to stick to Polytrack where he has done his best performances,” said Clements.

“After he bypassed the turf race, he had one more week and that’s why he trialled again today.”

Joining Moon Face in the contest will be stablemates Celavi and Tuesday, two up-and-comers who are in the mix for a tilt at the Group 1 Lion City Cup (1200m) on April 24, even if they have everything to prove on turf, and whom Clements obviously know a lot better.

A four-year-old mare by Fighting Sun, Celavi returned to racing from a near one-year-long break on February 27, producing a terrific second to Darc Bounty.

Tuesday has, on the other hand, already raced three times this term, for two wins and a fifth to Makkem Lad at his last start in a Class 3 race over 1200m on March 27.

“Celavi missed out as the Emergency Acceptor last weekend. She has come through her first-up run very well, and will be suited by the course and distance,” said Clements.

“Tuesday ran on fair at his last start. He wasn’t well drawn and wasn’t suited by turf, he goes better on Polytrack.

“I’m looking at the Lion City Cup for both, but I’m not sure if they’ll run as they have yet to run well on turf.

“But if they win well next week, even if it’s on Poly, they will have to be considered.”

While the premier sprint race is a tentative target for Celavi and Tuesday, one horse who is guaranteed of a berth for Clements is recent arrival Muraahib, while he also has another “maybe” up his sleeve.

Previously with Lee Freedman (also left Kranji last month), the Reset six-year-old was unable to score in four starts for Donna Logan and new owner Kuldeep Singh Rajput, who has eventually gone for a change of scenery by picking Clements.

“Muraahib is so far my confirmed Lion City Cup runner. He just came to my yard,” said Clements.

“I may possibly run Top Knight, too, before he goes to the Kranji Mile (May 22). He came out good from the weekend.”

The dual Singapore Derby-Queen Elizabeth II Cup winner raced first-up from a five-month layoff in the Kranji Stakes A race over 1200m on Sunday. Settled at the rear in his customary get-back style, the Zoustar five-year-old made some ground on the outside to run seventh to Kharisma, a performance that did not fall outside the script for Clements.

“It was a pleasing enough run over 1200m. He’s come through well,” said Clements.

“But the Lion City Cup will be more of a prep run towards the Kranji Mile.”