In fact, he won the Group 3 feature race last year with Tiger Roar, adding to victories in 2017 with Countofmontechristo and also Kiwi Karma, who won under jockey Manoel Nunes in 2015.

While it has been seven years since he last teamed up with Nunes to win this race, it is no coincidence that Clements teams up again with the leading hoop as he attempts to become the first trainer to have his name engraved on the trophy four times.

As it stands, the naturalised Singaporean sits equal with training luminaries, the late Laurie Laxon and John Meagher on the honour board with three wins apiece and he will be hoping Alqantur can put him on top come Saturday afternoon. 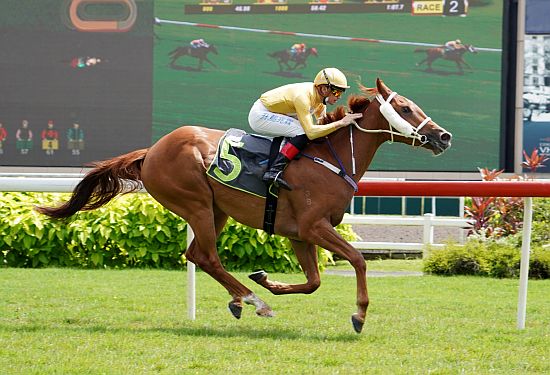 “Yes, the race has been good to me,” said Clements from trackwork on Thursday.

“And I think Alqantur has a good chance on his best form.”

That best form – albeit from a small sample size – was when the Star Turn gelding backed up his dominant maiden victory on debut with a very good win in Novice company at his second start – both with jockey Louis-Philippe Beuzelin onboard.

The plan was hatched for a tilt at the three-year-old Group races after that Novice win and Clements was quick to book Nunes for the foreseeable future.

“Well, he (Nunes) has got this place worked out,” explained Clements.

“All the different surfaces, the bends, a good judge of pace and he places them so well.

“He also does a lot of work during the week too, gets to know all his rides which is important as Alqantur has his quirks.

Those quirks were certainly the undoing of the Al Rashid Stable-owned Australian bred at his third start (with Nunes on), as Alqantur missed the start and blew his chances when finishing eighth, first-up after a short spell.

“He has a tendency to lean on the barrier - he did it more that day – they tried to straighten him but he came out awkwardly and lost four or five lengths,” continued the 2020 Singapore champion trainer.

“Yes, it was disappointing but he’s still learning.

“We gave him a barrier jump the other day where he stood well and jumped on terms and we have also given him extra barrier education during the week, so let’s hope that’s sorted.”

A slight gear change by the trainer could also see a more tractable run.

“He raced in winkers at his first two wins but he came back from his break a bit more mature and obviously fresh, so we left them off last start,” he continued.

“He is still a bit green so we will put them back on and from gate three, he should race handier and show his best.”

His best could very well be good enough in a race with no real standout, but Clements expects those with recent winning form to be the popular picks.

“Yes, (trainer) Stephen’s (Gray) horse (Silent Is Gold) looked good winning his last two races and Golden Monkey looks a nice horse, so I think they are the two to beat,” he said.

“But our boy is progressive and will probably sneak under a few radars given his unplaced run last start and that suits us fine.” 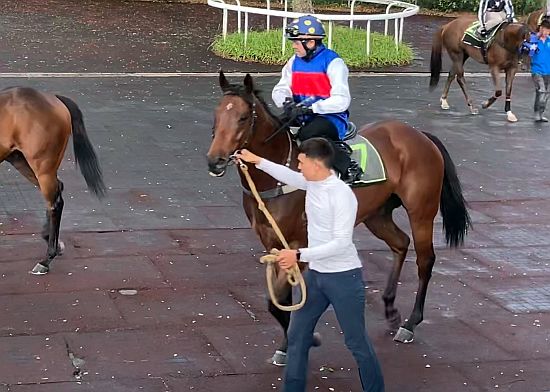 Tiger Roar (Manoel Nunes) on the way to his barrier trial on Thursday morning before his assignment in the Group 2 Stewards' Cup (1600m) next Sunday, picture Singapore Turf Club

One horse not flying under the radar is last year’s 3YO Sprint winner – Tiger Roar – who was having a trial on Thursday morning as he prepares for his next assignment, the Group 2 Stewards’ Cup (1600m) next Sunday.

“He’s just having a trial to keep him ticking over,” stated Clements of the four-year-old who finished seventh (1.7 lengths behind) in heat no. 3 behind Lim’s Kosciuszko in the winning time of 1min 00.72secs.

“Obviously, Lim’s Kosciuszko is very highly rated but I think the gap (in ratings) is a bit misleading as our boy had a few injuries so he hasn’t raced much in the last year where (trainer) Daniel’s (Meagher) horse has been sound and winning.

“Of my 3YO Sprint winners, I think Tiger Roar has more upsides than both Countofmontecristo and Kiwi Karma, so I’m pretty excited about where we can go with him.”

Exciting times ahead indeed and apart from Alqantur in the feature, Clements could have a very good day with another five or so with serious winning chances on what looks like a very competitive day of racing on Saturday.

“He enjoys the Poly(track), (jockey) Marc (Lerner) can slot him in just behind the leaders from gate one and while he can be a bit of a hit-or-miss, he is in good order and should run well.

“Lankaran has found a tough race ($50,000 Countofmontecristo 2017 Stakes, a Class 4 race over 1400m on the turf) but we are dropping him back to the seven furlongs where the pace suits him.

“He’s a European horse so they often take a while to acclimatise, but he is a horse to follow.”

“Things didn’t go her (Istataba) way last start, so we will ride her a bit quieter and it’s not a strong race,” imparted the trainer.

“Starlight looks well-placed at the handicap conditions but he probably hasn’t shown the flair he showed last season, but we have done a bit of work with him and we are hoping he is ready to show his best.”

“He has a few issues at the barriers but if he stands and jumps well, he will go very close.”

So with one eye on the big prize and a slice of history with Alqantur in the 3YO Sprint, the Clements’ stable is certainly one to follow on Saturday.