The weather gods were not smiling but the racing gods were for the happy connections of Cheval Blanc in the $50,000 Class 4 race over 1600m on the Polytrack at Kranji on Sunday.

A weather delay – lightning – earlier in the day had the third race put back 10 minutes, but the deluge before the horses went to the starters for the penultimate race of the day was biblical.

So much so race caller Pat Comerford was relying on some guesswork down the backstraight – he literally couldn’t see the riders’ silks - before the only grey in the field, Cheval Blanc (Marc Lerner, $39), made his job a tad easier in the last 100m with a burst to get up in a busy finish by half-a-length.

He beat the gallant Axel (Jerlyn Seow) into second place with Born To Win (A’Isisuhairi Kasim) just over another length away in third place. The winning time was 1 min 39.3 secs. 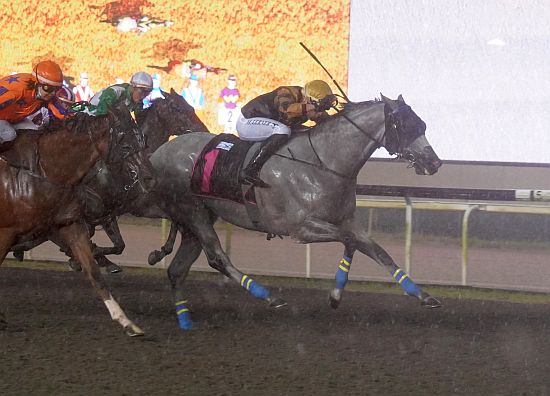 The win was especially pleasing for his trainer, Stephen Gray, given the issues the Irish-bred seven-year-old has had to overcome.

“The staff did a good job looking after him,” Gray explained to racing presenter Scott Bailey.

“He will never be as good as he could be because of his issues (lameness), but he’s sound at the moment and can put in a good race, which he did.

“It was terrible conditions for the jockeys but it helps that he’s a natural stayer - he got in the clear and kept going. He liked the rain!”

Gray was also very complimentary of the owners of Cheval Blanc from the Team Cheval Stable.

“Good owners, good people. Good supporters of the industry - Eric (Koh) and (his wife) Lay Chin – they kept supporting the local racing and that’s what has kept us going the last two years.”

The heavy rain did not stop connections from greeting the winning horse and jockey when they returned to scale, albeit under the cover of the massive grandstand.

“Halfway through (the race), I didn’t think he would stay, but he stuck on, then he came back very good - I’m very happy!”

Bailey also spoke with a drenched – but happy - Lerner in the Weighing Room after the photos with the happy connections.

“When he feels good on the day, he can always win a race like this.

“Stephen was a bit concerned about the 1600m - dropping back in distance but we got a good run behind the pace and he just fought on.

“He can stay all day. I’m just happy that he wins because he has had his issues and also for connections who were here.”

The win – Cheval Blanc’s second from fifteen starts in Singapore – brought his total stake earnings to more than $104,000 for the Team Cheval Stable. 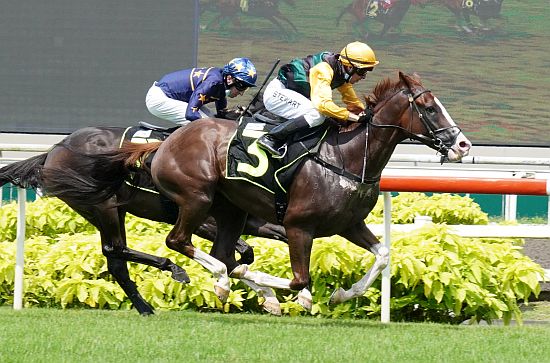 Earlier in the day, it was another horse with issues, Mighty Vain, who provided a highlight in sheer perseverance for his connections - Toast Trusts and J. Ho Stable - by breaking his maiden at start no. 21.

The Australian-bred five-year-old had bleeding issues – and unfortunately bled again on Saturday – but despite his troubles, had placed nine times from 20 career starts.

So while the celebrations were somewhat muted given the post-race circumstance, his trainer, Stephen Crutchley was pleased Mighty Vain finally got his win.

“He trialled so well that we expected a lot from him today, and it’s turned out that way.”

Mighty Vain (Ronnie Stewart) beat the improving Lim’s Puncak Jaya (Danny Beasley) by half-a-length with Kranji Jewel (Jake Bayliss) a further two lengths back in third. The winning time was 1 min 23.03secs in the $20,000 Open Maiden race over 1400m on the Short Course.

The training honours went to Donna Logan with a treble, and her trio of winners (Deception, Reignite and Diamond Ring) kept her golden run of winning form going. Desmond Koh was the only other trainer to lead in more than one winner with Sun Ace and Sun Rectitude – both for the Sun Bloodstock Racing Stable.