Chavez gets his moment of Glory in Lucky Last

After fellow comeback kid Troy See broke the ice with Beer Garden earlier, Oscar Chavez had a mind not to be left behind with a dry mouth, but the cool Panamanian would not let the pressure get to him as he knew all along he had left his best hand for last.

The resuming All Too Hard four-year-old produced an electrifying turn of foot to beat Federation (Hakim Kamaruddin) by one-and-a-quarter length with Miej (Shafrizal Saleh) third another half-length away, and is prepared by Chavez’s new supporter, Cliff Brown.

An emotional Chavez weighed in at a place he had not stepped on since November 26, 2017 when he then brought up a riding double on Xiong Fong. 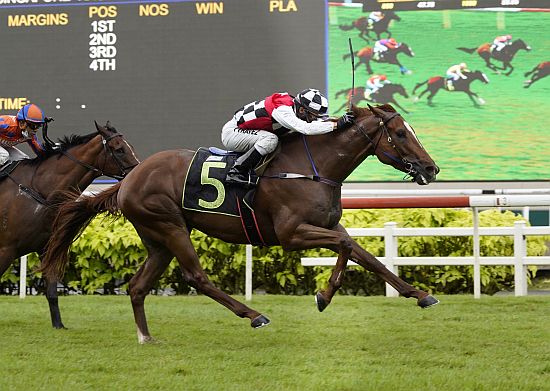 In All His Glory (Oscar Chavez) pulls away to a resounding win in the last race on Saturday, picture Singapore Turf Club

The Singapore Turf Club had not renewed his jockey’s licence, and after several unsuccessful attempts to have it reinstated, he was finally granted a six-month licence from January 1 to June 30, 2021, just like See.

The naturalised Singaporean and father of three boys would rather not dwell on the last three years he was left with no other choice but to fly in and out of Singapore to other countries like Macau and Malaysia to continue his trade and put food on the table, preferring to focus on the new lease of life that had just begun.

“When Troy won earlier, I told myself I had to win a race, too, but at the end of the day, it didn’t matter so much if I didn’t win today,” said Chavez, 46, a winner of more than 1,200 races (including at his native Panama) and who moved and settled in Singapore in 1993.

“I couldn’t complain with the way my horses have been running so far, both today and last week (at opening 2021 day on January 3). They ran according to expectations, and I just wanted to take my time and not rush.

“I knew the horses would improve bit by bit, but I did tell Cliff I thought In All His Glory was by far our best chance (the Australian trainer had also not opened his 2021 account after Saturday’s penultimate race).

“The horse has been working very well, and I was very confident he would run well. He jumped well and I just left him where he was happy.

“The pace was crazy upfront. As soon as the gap came up in the straight, I said ‘you go boy’.”

Chavez himself was extremely thankful he was given a ‘go’ by a trainer he had not linked up the most with in the past, but who spontaneously took a chance on him when he went knocking on his door.

Like most jockeys, Chavez, rides freelance. While he had tended to gravitate towards certain trainers like Alwin Tan, Hideyuki Takaoka, John O’Hara and David Kok in latter years, he has actually enjoyed a wide working base that also included expat trainers like Steven Burridge, Mark Walker, (ex-trainer) Brian Dean or Daniel Meagher, mostly for his well-reputed natural ability with difficult horses.

Likewise, Brown has been using a wide spectrum of jockeys since he began training at Kranji in 2008, but only had Michael Rodd as stable or “first-pick’ jockey in the last three or four years or so.

After Rodd, along with three others, returned to Australia last year when COVID-19 struck, Brown was suddenly left without a go-to jockey, not to mention the drop in numbers among the expats had also opened the doors to more local jockeys.

“I have to really thank Cliff for taking me on board. When I approached him to take me as a senior track rider last year, he took me in with open arms,” said Chavez.

“Though I didn’t ride a lot for him, he did give me a few rides and we’ve had a few winners together.”

It turned out that Daring Journey on September 19, 2010 was the last of his total of four winners for Brown, the others being Merchant and Dabble the same year and So Majestic in 2009, interestingly with Merchant then also racing in Brown’s own Tarnpirr Stable red and chequered flag quartered silks, the same as In All His Glory on Saturday.

From that 10-out-of-10 ride aboard In All His Glory where Chavez showcased his patient handling as well as his trademark South American crouched-down riding style inside the last 100m, there is every chance that statistic can only trend upwards from now on.

“I hope we will continue to have the same success for a long time to come,” said Chavez.

A winner of a two-in-a-row last September before he blotted his copybook at his last start, prompting Brown to tip him out, In All His Glory has now brought up his handy record to three wins, two seconds and one third from eight starts for prizemoney in excess of the $130,000 mark for the Tarnpirr Stable.