Douglas Whyte waved farewell to the most successful race-riding career in Hong Kong history on Sunday evneing at Sha Tin Racecourse, bowing out after saluting his fans long after the last race had weighed-in.

The 13-time champion jockey’s final ride did not produce the fairy tale victory that he and the Sha Tin faithful desired, but the day delivered heart-warming displays of respect and appreciation for a sportsman whose achievements have lifted him high into the pantheon of racing’s legends. 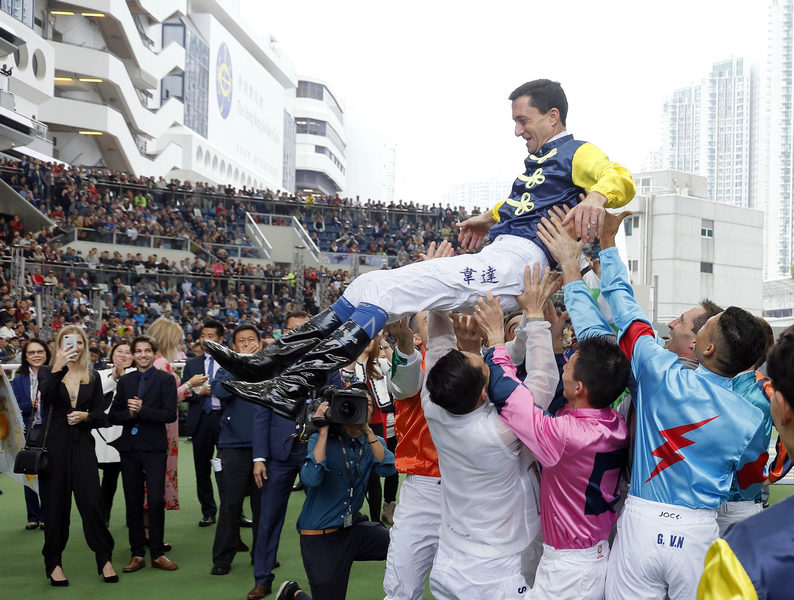 The man they call the Durban Demon was “overwhelmed” in particular at the send-off he received from his jockeys’ room colleagues, for so long his unwavering rivals.

“Behind the gates (before the last race) it was quite emotional because the starter, Tony (Speechley), said a few words and all the jocks gave me a hip-hip-hooray, so it was a really nice send-off. You get a bit of a lump in your throat but I still had a race to ride,” Whyte said.

Whyte’s blank on his final day was not for the want of trying but did owe something to a stroke of misfortune. Two seconds were his closest placings – Mr Croissant in race two and Seven Heavens in the eighth – but the near-miss came when he rallied the impeded Storm Signal close home in the seventh contest, only to take third.

“I would have won the race,” he said. “That’s the only bittersweet ending to the day. I’d have loved to have had a winner but I’m happy with the way every horse ran and the way I rode every horse.

“I’m leaving on a high but I would have won on Storm Signal. I was just gaining momentum, I was coming to win the race and when you get knocked sideways like that – then the horse on my inside turned my hindquarters and he lost momentum and still picked up.

“Of course, I’m a sportsman,” he added, “you’d love to ride a winner on your last day but the main thing is the fantastic ending, the good reception from the crowd – every horse I thought ran well today.”

Earlier, Whyte received a silver dish and a commissioned painting from the Jockey Club. That came after race four, before a parade ring full of his weighing room colleagues, trainers, media, and family, with a few thousand appreciative spectators looking on.

“That was emotional. Thank goodness they didn't give me a mic straight away because I wouldn't have been able to speak. I don’t often cry but possibly I would have,” he said.

“I had my family here - it’s my daughter’s 19th birthday so it’s one of those days where being overwhelmed and enjoyment takes over disappointment. I’m happy and I’m looking forward to the next chapter.”

A group photo with his fellow riders followed – and then the ambush. Vincent Ho and Silvestre de Sousa moved quickly, grabbing Whyte and lifting him into the air as other jockeys moved in, throwing the champ skywards and catching him three times.

“All the guys in the jockeys’ room wanted to do something that was going to be special, something he’d remember the rest of his life,” Umberto Rispoli said. “We discussed with Joao (Moreira) that we’d lift Douglas up and so the signal was that I’d whistle and we’d bring him up.

“It’s his last day and I remember before I came here, everybody, whenever you talked about Hong Kong racing, the first thing that would always come up would be Douglas Whyte. He’s a legend here.”

After the lifting, Rispoli launched the first wave of champagne spray, Ho followed with a second bottle and then Karis Teetan directed a drenching gush of bubbles from the flank; Joao Moreira and de Sousa moved in to pour the bottles’ remnants over the retiring hero whom the Jockey Club has licensed as a trainer for the 2019/20 season.
Whyte took it all in good spirits.

“It shows a lot of respect over the years of rivalry we’ve had – there’s a good side to everybody,” Whyte said. “We’re competitors and when we go out there we’re fierce, we’re rivals, and it’s nice to see that side of them.

“I will say, the first time they threw me up in the air I went to put my hands down because I was expecting more of them to walk away! But the second time I got a bit of guts and held my hands out. It’s nice, it’s overwhelming.

“It’s been a long journey and now my new journey begins. I’m a bit emotional now it’s all over.”

Purton had set the tone for the celebrations before Whyte stepped out from the Parade Ring wings. The arch rival went down on one knee and “shoe-shined” the legend’s boots, to the huge delight of watching fans.

And Whyte, who said he is looking forward to perhaps even eating some breakfast in the morning, admitted: “I will tell you that I will enjoy not having to sweat and having to get prepared like I do for race day. It’s mentally draining!” 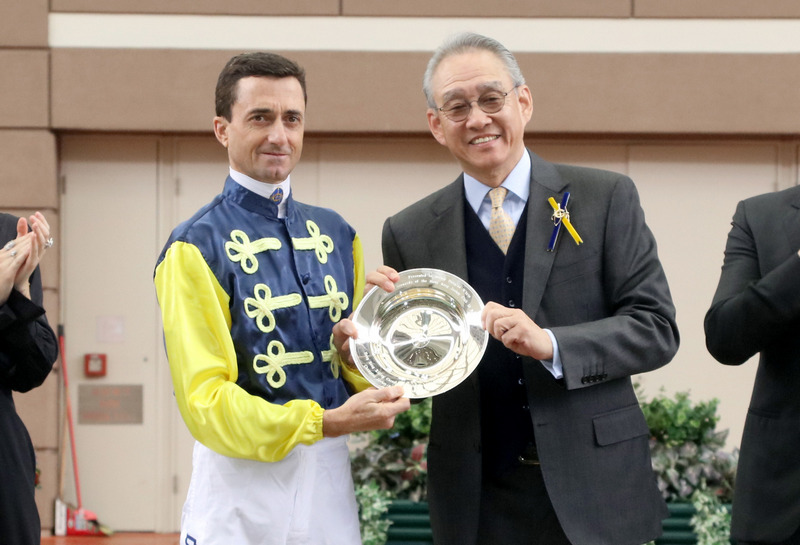