Can Magical retain her crown or will Mishriff triumph for Gosden?

Magical is back for more. In a year when her long-time nemesis Enable has underwhelmed, the Aidan O'Brien-trained mare has had arguably her best season to date with three Group 1s to her name already. 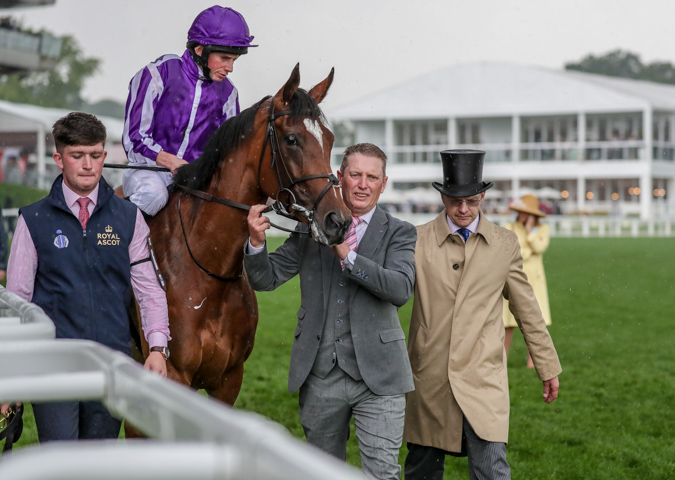 With seven successes at the highest level there is no doubting Magical is a high-class mare, but she had developed something of a reputation as the yardstick by which a truly exceptional Group 1 horse is anointed.

She has finished second to Enable three times at the top table. Crystal Ocean and, in this year's Juddmonte International, Ghaiyyath were others to enhance her status as a kingmaker.

Yet O'Brien had always maintained that we had not seen the best of her, what he sees in her at home, and last time she truly delivered. In an Irish Champion Stakes featuring this season's dominant force Ghaiyyath and subsequent Arc winner Sottsass, she absolutely blitzed the field to add to her Group 1 wins in the Pretty Polly and Tattersalls Gold Cup.

She returns to Ascot a better and fresher horse than when justifying even-money favouritism in this race last year on soft ground by three-quarters of a length from Addeybb.

As has become the norm in these biggest of races O'Brien has several that more than merit their place in the line-up and Derby winner Serpentine and Japan, who has now not won for over a year, flesh out the O'Brien challenge.

Last month Anthony Van Dyck became the first Derby winner to win another race of any description since Harzand in 2016 and O'Brien said of his trio: "Magical is in good form. Serpentine had been aimed at the Arc, but has obviously been re-routed and it's the same with Japan.

"All three go to Ascot in great form but obviously we'd prefer if the ground was better for them all."

Crunch time for Mishriff after bypassing Arc
When John Gosden resists the overwhelming temptation of Europe's richest race, the Prix de l'Arc de Triomphe, with a middle distance type, it can have a devastating effect on the Champion Stakes.

Twice he skipped Paris with Cracksman, twice we saw the performance of the season at Ascot – and this year he has done the same with another top three-year-old in Mishriff.

Curiously, the Prince Faisal-owned colt has largely been campaigned in France until this point, landing the Prix du Jockey Club on good to soft and the Prix Guillaume d'Ornano on heavy. Significantly both were over this trip of a mile and a quarter.

Gosden said of Frankie Dettori's ride: "Mishriff is drawn a bit wide in nine, which can be a bit tricky over a mile and a quarter, but he's been training well and we've been targeting this race since he won at Deauville in August.

"It's his first time against older horses but it's not so much of an issue in October as it can be in the summer as the three-year-olds have caught up. He handles the ground and we'll see how his French form stacks up."

Like O'Brien, Gosden has an embarrassment of riches these days and supplements one star with another as Prince of Wales's winner Lord North returns to the scene of his most famous victory.

Gosden added: "Lord North likes the track, as he showed when winning the Prince Of Wales's Stakes at Royal Ascot when there was some cut in the ground.

"We've targeted this since the Juddmonte International when James Doyle thought he was wheel-spinning on the very deep ground at York, but he should be fine back at Ascot."

Rouget hoping Skalleti can spoil the party
The last time Messrs O'Brien and Gosden failed to lift the Champion Stakes it was a French raider who prevailed in the form of Almanzor. If the two training behemoths are to be denied once more, it may well be France again that denies them.

The Jerome Reynier-trained Skalleti beat Sottsass by a neck, admittedly in receipt of 6lb, in the Group 3 Prix Gontaut-Biron at Deauville and then added the Group 2 Prix Dollar on Arc weekend last time.

Both wins came over a mile and a quarter on heavy ground and Reynier said: "Although he’s never been abroad before, he’s used to travelling as every time he goes from [my yard in] Marseille to Deauville it’s a ten-hour trip each way.

"He is a very genuine horse and a big fighter. I don’t think I’ve ever had him in better shape, mentally or physically. He won the Prix Dollar pretty easily, in the space of half a furlong it was done because he showed such a good turn of foot.

"He has now won three Group 2s and there are not many Group 1 opportunities for geldings like him so it’s time to try."

Addeybb makes a prominent appearance in the form lines of Magical and Lord North, but he is no back number as he proved down in Australia in the spring with two Group 1 wins.

The key to him is soft ground and his entire preparation since his second in the Prince of Wales's Stakes at the royal meeting has revolved around this race.

His trainer William Haggas said: "He’s fine. The wide draw is unfortunate – it’s never ideal at this trip on that track. He’s a horse who’s hard to fault. He’s very well and will enjoy the ground."

Another who may find the ground in his favour is Pyledriver, who has largely been running on sounder surfaces and over longer trips this season – landing the King Edward VII Stakes at Royal Ascot and the Great Voltigeur at the Ebor meeting, before finishing a gallant third in the St Leger.

Trainer Willie Muir said: "Everything's been the same throughout the year and he's just his laid-back self. It's the end of the year and I don't think the drop to a mile and a quarter on very soft ground will be as big an inconvenience as some people, I definitely wouldn't go back to a mile and six with him.

"I'm not saying he didn't stay but we took his gears away – so I'm very much looking forward to tomorrow."

The field is rounded out to 11 with sporting owners generally the theme. Roger Charlton, trainer of Extra Elusive who has won two Group 3s this year, said: "His owner/breeders Blue Diamond Stud are big supporters of British racing and are keen to have runners in the best races.

"He'll need to step forward a bit but I'm hoping he'll run well and there's prize-money down to sixth place."

The David Simcock-trained Desert Encounter is comfortably the oldest in the field at eight and Simcock explained: "He's great fun and the owner's very keen to run on Champions Day, but at the end of the day he's very likely to find this company a bit too good for him."

While, Roger Varian, trainer of San Donato, concurred: "He has plenty of natural ability, has shown an ability to handle testing conditions in the French Guineas, and his owner Sheikh Mohammed Obaid is keen to run him over a trip his sire's [Lope De Vega] progeny excel over. Hopefully he can run well."