Neil Callan secured his second double in as many meetings at the city circuit, sealing his brace with a gritty success aboard Fast Pace, who stubbornly fought back after being headed in the home straight to land the first section of the Class 4 Shun Lee Handicap (1650m) at Happy Valley on Wednesday. 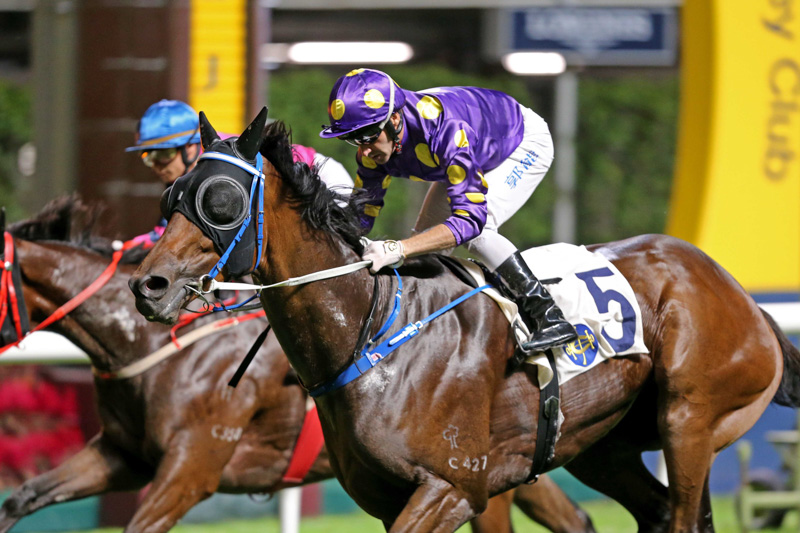 “He’s a nice horse, he’s got a lot of raw ability; Caspar’s (Fownes) done a lot of work with him, when he first came in with his first few runs he was flipping in the gates, going mad,” Callan said.

The Savabeel gelding grabbed his first Hong Kong win at his sixth start, putting two previous misdemeanours in the gates behind him. The Hong Kong International Sale graduate’s exploits in the stalls have twice resulted in his withdrawal due to self-inflicted lameness after playing up.

“He’s been withdrawn a few times, he wears a pacifier to just try and calm him down, because the ability is there and he just needs to just take a chill pill and hopefully more racing will do that for him,” Callan said.

Callan indicated that the 48-rater has further improvement to come: “He has more ratings points in hand and he’ll probably get a little bit further in time but he definitely has a bit more to give.”

The win of Fast Pace was the first of two for championship leading trainer Caspar Fownes, who edged to 25 seasonal wins thanks to fellow Hong Kong International Sale graduate Guy Dragon’s thrilling success in the nightcap, the second section of the Class 3 Fu Cheong Handicap (1200m) with Alexis Badel up.

Callan earlier kicked off his pair with victory aboard the Cruz-trained Sunny Lad in section two of the Class 4 Shun Lee Handicap (1650m). The Sepoy gelding was a two-time winner in Britain prior to export when under the care of John Gosden.

Jerry Chau also bagged a double, capping it with a win aboard the Cruz-trained Mig Energy in the first section of the Class 3 Fu Cheong Handicap (1200m).

“The horse (Mig Energy) relaxed and on the turn he travelled well, I found room and when the gap opened he dashed home really well,” Chau said.

Blake Shinn nabbed his fourth win this season and his first for trainer Tony Millard with an accomplished ride aboard Strathclyde in section two of the Class 5 Wah Fu Handicap (1200m).

“Full credit to Tony (Millard) he had the horse just in a wonderful frame of mind going to the barriers and I was really happy with how he felt even before the race - I was quietly confident,” Shinn said. “It was just a matter of utilising the good draw, gate two, and we were able to do that.”

Hong Kong racing continues on Sunday, 22 November at Sha Tin with a trio of G2 contests for Jockey Club Races in the lead-up to next month’s LONGINES Hong Kong International Races on 13 December.