Trainer Cliff Brown has been handed a golden chance of heading into next Sunday’s $1.15 million Group 1 Emirates Singapore Derby (1800m) with a two-pronged attack after Magnificent Gold took out the $45,000 Class 4 Non Premier race over the same Derby distance on Friday night.

The Australian handler already has Could Be Pearls in the third Leg of the Singapore Four-Year-Old Challenge, but he had also nominated Magnificent Gold, who was on the other hand lower in the pecking order in the list of entries.

On 58 points, the son of High Chaparral sat on the fringe of the final field of 16, but with Friday’s resounding two-length win, he has certainly done his chances of joining Could Be Pearls no harm, but Brown said a final decision would only be made in coming days. 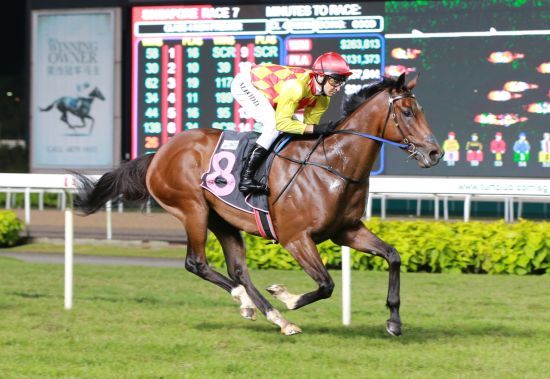 “I’ll speak with the owner (Mr Yong Nam Seng of Gold Stable) and also see how he pulls up first,” said Brown.

Though the Singapore maiden win was convincing, it is a fact that the Derby is another kettle of fish, even if the saying “you turn four only once” has often been a good excuse to make a case for a run.

Racing as Big John Cannon for Mornington trainer Jim Conlan in Victoria, Magnificent Gold came to Singapore with a record of two provincial wins (1400m) from 12 starts, but still had a blank sheet in five starts at his new home before Friday’s impressive Kranji account-opener.

He had actually been making some headway, even if his last-start unplaced run in a Kranji Stakes C race over 1800m had been hard to explain.

A Derby ticket is now dangling enticingly, but Brown was not rushing in to grab it.

“I don’t know what happened at his last start. It was very confusing,” said Brown.

“But he won tonight and that’s what matters. He won by a couple of lengths, but I think he’ll have to do more.

“He will make into a nice horse with time. He can become a Gold Cup horse.”

Ridden by Brown’s No 1 jockey Michael Rodd for the first time, Magnificent Gold overcame an awkward alley to settle in the first few, one off the fence, until the home turn where he was angled out three wide to launch his run.

Clearly a stayer who is more grinding than brilliant, Magnificent Gold revelled on the Long Course, using the whole length of the straight to raise a searching gallop to the line.

He eventually kicked clear to relegate the pair of Lim’s Ripple (Ryan Curatolo) and Humdinger (Daniel Moor) by two lengths with the former getting the runner-up spot by a nose. The winning time was 1min 48.56secs for the 1800m on the Long Course.

“This horse has been a little unlucky of late. At his last start, he fell out of the gates and he is the sort who can lose his concentration,” said Rodd.

“He had to work a fair bit early. He was able to rest, but when I was flushed out at the home turn, we had to sustain a mighty run and he was really strong to the line.

“He really has a big set of lungs. I can’t remember the last time I exposed a horse that early and he still kept going.”

Brown went on to wrap a double for himself and the Gold Stable when Gold Strike ($25) won the next race, the Lucky Last, the $60,000 Class 4 Premier race over 1200m. The win also handed jockey Barend Vorster a riding double after he won the Kranji Stakes A race over 1200m aboard Mr Fantastic (see earlier report).