Morfhis cemented his place as one of Korea’s great sprinters, edging out Black Musk and Eoma Eoma at Seoul Racecourse on Sunday afternoon to win his second SBS Sports Sprint (1200M KOR-G3), having previously taken the honours in the race in 2020.

Eoma Eoma, racing for the first time since winning the Busan Ilbo Sprint in April, was sent off as the odds-on favourite ahead of Black Musk, the SROA Chairman’s Sprint winner. It was East Jet though who set the early pace as the other big guns opted for patience.

In the home straight, both Eoma Eoma and Black Musk launched strong challenges, but it was Morfhis, who had improved rapidly coming off the final turn under Johan Victoire, who struck the front and would not be caught, coming home half a length ahead of Black Musk, with Eoma Eoma a short distance back in 3rd.

Remarkably, the winning time was identical to the one Morfhis recorded when winning this race two years ago, when he drew the widest gate and ran on from much further back as a 23/1 chance.  This time, he was 14/1, but t hen, just as now, he was ridden by French jockey Victoire, who enthused over his mount: “It was a fantastic race and what a horse!” 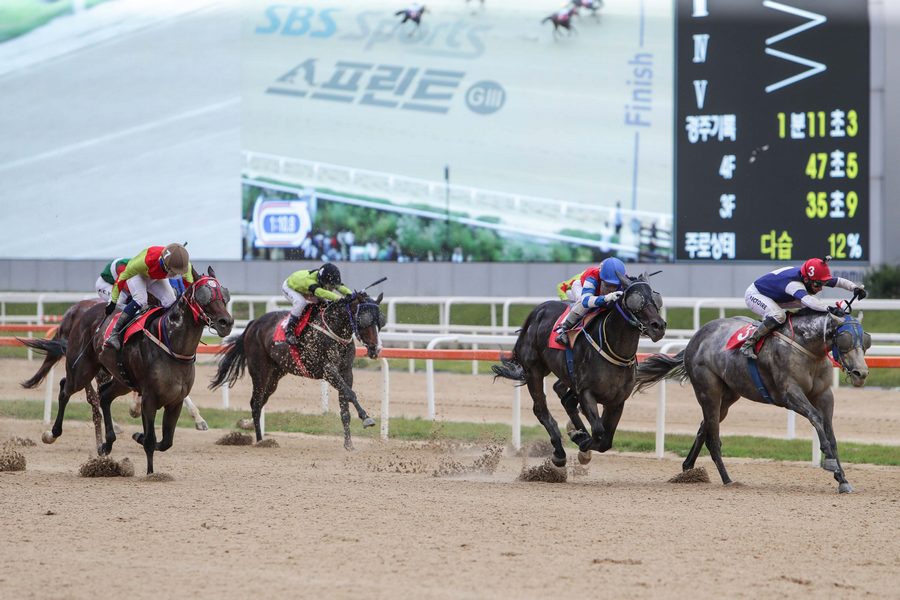 While already an established class 1 performer, it was the 2020 SBS Sports Sprint win that elevated Morfhis into the elite of Korean racing. An almost ever-present in top class sprints since, he was 5th in this race last year and 3rd in the SROA Chairman’s Sprint in both 2021 and in last month’s renewal, but remarkably, before today, he hadn’t won any race since April of 2021; a 1400M class 1 handicap, run for Covid shutdown enforced reduced prize money.

On Sunday everything came right for Morfhis, as jockey Victoire explained: “He really loves to come to the inside but always has bad draws so today I was lucky with (gate) three, and I could follow the horses (Black Musk and Eoma Eoma) to beat.”

The victory was Johan Victoire’s fourth Group success in Korea and the jockey explained how much the seven-year-old means to him. “Morfhis is a very special horse to me. We know each other by heart as I started riding him since the beginning of my career in Korea. We won eleven races together which is amazing! I really love this champion horse.”

Bred by Canamer Farm in Kentucky, Morfhis [Stephen Got Even – Chinchilla (Rubiano)] fetched $35,000 as yearling at the Fasig Tipton October Sale in in 2016 before being purchased by Korean interests for $150,000 at Ocala Breeders’ Sales Spring Two-Year-Old sale. Now owned by Park Nam-sung, Morfhis has amassed approximately $1 Million in prize money in Korea.

Having won the race last year, Eoma Eoma repeated his 2020 finish in 3rd while Black Musk, the only four-year-old taking part, confirmed his status as potentially the next big thing in sprinting, with a game 2nd. That made Black Musk the winner of the Sprint Series with Morfhis and Eoma Eoma tied for 2nd and Raon The Fighter in 4th.

Morfhis, Black Musk, Eoma Eoma and Raon The Fighter, will all be expected to reconvene for the International Korea Sprint at Seoul Racecourse on Sunday September 4th. Ideally and probably against Japan and Hong Kong-trained opposition.