Cranbourne trainer Brian McGrath says he has finally got the gorilla off his back following the maiden win of D’Jumbuck in the $50,000 Ladbrokes Plate (1300m) at Sandown on Wednesday.

McGrath is the son of famed former UK broadcaster Jim McGrath and Wednesday’s victory was his first success as trainer in a metropolitan race.

He has been training at Cranbourne since 2016 and had his first winner when Larrikin scored on the synthetic track at Geelong in July of that year.

But it has been a city win McGrath has craved and after a patient ride from Melbourne’s leading jockey Jamie Kah, D’Jumbuck finally delivered.

Hitting the lead inside the final 100m, D’Jumbuck ($3.60) held off the determined bid off Mexican Star ($16) to score by a short-neck with the $1.95 favourite Captain Spud a further three-quarters-of-a-length away third.

“She rode him a little bit more patiently, we tinkered with the gear a little bit as well as he was a bit keen in the blinkers, and I’m glad we got the win.

“I’m pleased that he has won. He was bred and is owned by my father along with some other family members.

“We’ll have a bit of a buzz for a couple days.”

McGrath said he has some nice three-year-olds under his care and added that it was important to be “relevant” in city class races.

Kah, who followed D'Jumbuck’s win by guiding Ellis Park to victory in the following race to bring up a winning double, extended her lead in the jockeys’ premiership.

She said it was as important riding winners for the smaller stables as it is the bigger ones.

“I’ve been privileged enough to ride for a lot of good stables lately, a lot of big stables, but to ride a winner for Brian is great,” Kah said.

‘He’s such a lovely guy and he leaves it all up to me.

“It makes my job easy out there when you don’t have a lot of instructions.” 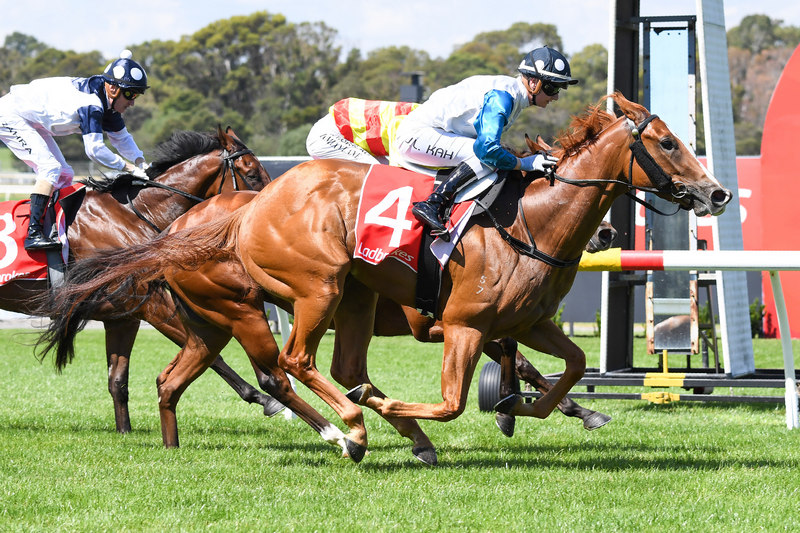