RadioTAB and Sky Sports Radio’s ‘greyhound guru’ GERARD DAFFY delivers his thoughts on the weekend, ahead of the Thursday night action and offers his experienced opinion plus a tip or two.

WE have often heard people say ‘‘there is a better one at home’’ after an impressive winner from a kennel, and that looks to be the case after trainer Ray Burman unearthed a potential star at Albion Park last Wednesday.

Recently Burman has produced some exciting youngsters from the OUT OF RANGE x CHAMPAGNE SALLY litter, but as each one of those won, the talk was about an unraced blue dog yet to grace the track.

The heats of the Eric Thomson Memorial were run at Albion Park last week as mentioned, and ‘the blue dog’, named STANTON WARROR made his debut, and what a debut it was. After stumbling at box rise from the white box, Stanton Warrior took off, careering away to win by nearly 12 lengths in a sizzling 29.85.

This litter have only just turned 19 months of age which speaks volumes for their potential, and they are bred to get further as their dam, Champagne Sally, was a multiple breaker of track records over all distances.

Thursday night we will see Stanton Warrior exit from Box 3 in the Thompson Memorial Final at Albion Park which will be Race 5 on the program. He has opened at $1.55 with TAB, which on face value looks a reasonable quote.

From the other three heats last week, the pace runner looks to be HARA’S HUNTER out in Box 7 which ran 5.59 early (from Box 1), before tiring to finish second. Those that have raced from the litter that Stanton Warrior is a member of, have shown they can find trouble and still win, so it will be fascinating to see what he produces on Thursday night.

ASTON TO BE FASTEST

THE G1 Maturity Classic will be run at The Meadows on Saturday night, and it appears to be one of the most open Maturity’s of the modern era.

HANDSOME RHINO and ASTON FASTNET were the equal fastest heat winners, stopping the clock at 29.85. Handsome Rhino came out running in his heat from Box 5, going through the first split in 5.02, and was never going to be beaten.

Aston Fastnet arrived in time to collar boom speedster KOBLENZ in his heat, which ended a winning streak of 12 in a row for Koblenz. QWARA BALE and Koblenz share $3 favourtism with TAB for the rich final, but Koblenz will need some luck as he is the first reserve and needs a scratching to force his way into the field.

Qwara Bale on the other hand was emphatic in an all-the-way win, but although she ran a fast first split of 5.08, her winning time of 30.19 was only steady in comparison to most of the others. At her best she can win, but the concern I have is that although she is drawn near the rails in Box 3, there is pace galore all around her, particularly to her right.

I have settled on Aston Fastnet, even though he may be viewed as badly boxed out in 8. He showed enough in a win at Albion Park two starts ago, that if given a few metres clear air early he can take off. He got conditions to suit that night running 5.56 early, and won in 29.62, just outside the best of the night run by EQUALIZER.

The Jason Thompson-trained star is capable of doing it at both ends as he showed last week, he just needs a nice cart across in the run to the first turn.

It is one of those finals where you could put up a case for all eight runners. There is pace, but I’m just not sure which one will lead, so that first 50 metres will be crucial.

Nihari Bale ran an average first split of 5.17 when he defeated ASTON RUPEE, but the winning time was ok compared to others. He has the gun draw and will be there to capitalise on any trouble going into the first bend. 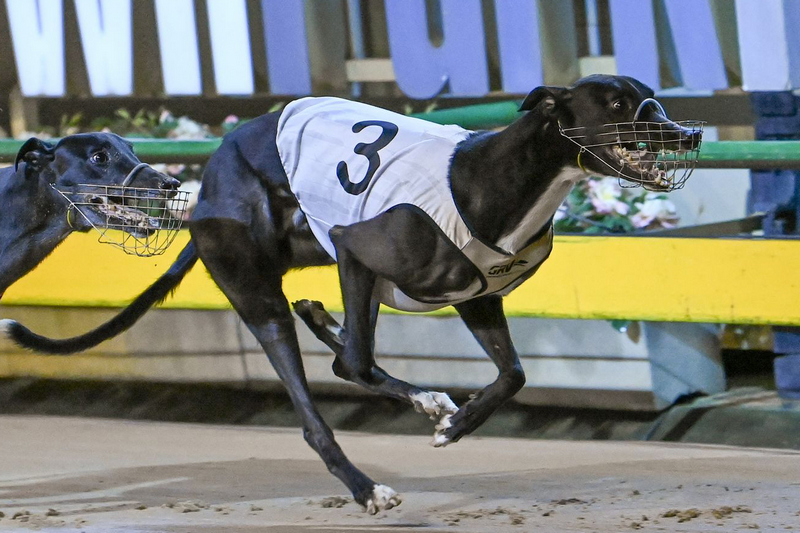 ON the same card, the G3 Destini Lodge Fireball Final will be run over 725 metres and like the Maturity, there appear to be several winning hopes.

I’M EASY BOYS and WHATEVER I SAY were the two heat winners from last week and very little separated that pair on the clock, with the winning times being 43.03 and 42.92 respectively. The latter ran a quicker split to the first turn, 4.82, while I’m Easy Boys ran 4.95.

Whatever I Say is a newcomer to the staying ranks, with the daughter of MY REDEEMER only having had 17 starts in total, so she can be expected to improve again, while I’m Easy Boys is a 4yo veteran racing in the best form of his career.

The TAB market has HANK THE HUSTLER $3.30 favourite ahead of Whatever I Say ($4.60), FIVE STAR ($5) and then I’m Easy Boys at $6.
Hank The Hustler found a few traffic jams early before he ran on really well to be beaten one length by Whatever I Say, and I think he will use his good draw (Box 1) in the final to grab the major prize.

‘Hank’ didn’t have much luck the previous week at The Meadows behind ZIPPING RAMBO and that followed on from an unsuccessful hit-and-run trip to Brisbane. He is a versatile stayer in as much as he can race right on the pace or get back and wind up, and there might be an opportunity to get a nice run in the early stages behind I’m Easy Boys which has the check box.

Five Star was a shade disappointing in his heat last week after returning from a stint in Queensland where he really did struggle. He is much better than his recent form shows, but I think I will sit on the fence with him until he gets back into the winners’ circle.

If there is to be a blowout it could be the very consistent STAR BLAZER, but I am keen to be with Hank The Hustler.

BEST BET OF THE WEEKEND

VALUE BET OF THE WEEKEND

Gerard Daffy is part of the TAB Media team based in Queensland. Gerard can be heard daily on RadioTAB which includes his popular Thursday morning program, On The Lure and Sky Sports Radio.