RadioTAB and Sky Sports Radio’s ‘greyhound guru’ GERARD DAFFY delivers his thoughts on the weekend, ahead of the Thursday night action and offers his experienced opinion plus a tip or two.

TIME TO GET ON THE DEUCE

THE owners of star greyhound JUNGLE DEUCE have added ‘marketing team’ to their resume’s as ‘Get On The Deuce’ merchandise has started popping up around Australia, and I think their greyhound can win the G2 Flying Amy Classic at Albion Park tonight (Thursday).

The Jack Smith-trained youngster won his 11th race from 17 starts in his heat of the Classic last week. The race was run in some of the worst conditions ever witnessed in Brisbane (replay above), and it was testimony to his chasing ability that he was able to reel in MERCHANT NAVY to win by a nose in 30.23.

The time was well outside the best of the night, but to be fair, the times were all over the place for the entire meeting with rain coming and going. One thing we know is how good Jungle Deuce is from inside draws. He has had five starts from Box 2 for five wins, and just the one run from the red, the same draw as this evening, and won that as well.

Five starts ago he led all the way from the check box to win at Wentworth Park in 29.40, but the noteworthy thing about that win was the 5.47 early split. So, for those who carry concerns that he could get buried up early, you might get a little surprise as to where he will be heading into the first turn.

The opening TAB market had Jungle Deuce at $2.60, but that is a distant memory as he has firmed right up to $2.15.

AMY ALWAYS A FIELD OF DREAMS

SO, what are the dangers?

To be honest, any of the eight runners could win given the right run in transit. It is a fantastic field, and with this race having a deep history of providing future stars, this edition will be no different.

Local hope IMPACT improved out of sight to lead all the way in his heat, easily running the fastest time of 29.73. The Kevin Ellis-trained youngster did get the best of the conditions on the night, but Ellis has always been of the opinion the dog had a future and we saw that on display last Thursday.

A winner of eight of his 12 starts, Impact had won at his previous two runs up the straight at Capalaba, both in fast time, so he comes into the final in fine fettle. Box 3 seems to be a nice draw as he can show pace.

Victorian DO IT ran second to Impact, beaten two lengths, and he had every chance to haul the winner in but couldn’t. It was difficult to make ground on the night and although drawn awkwardly in Box 5, the dog has a huge motor as evidenced by a win at Sandown recently in 29.15.

On occasions Do It has shown early pace, but those occasions are a rarity, however if gaps appear, he can definitely be in the finish and seems a nice price at $11. 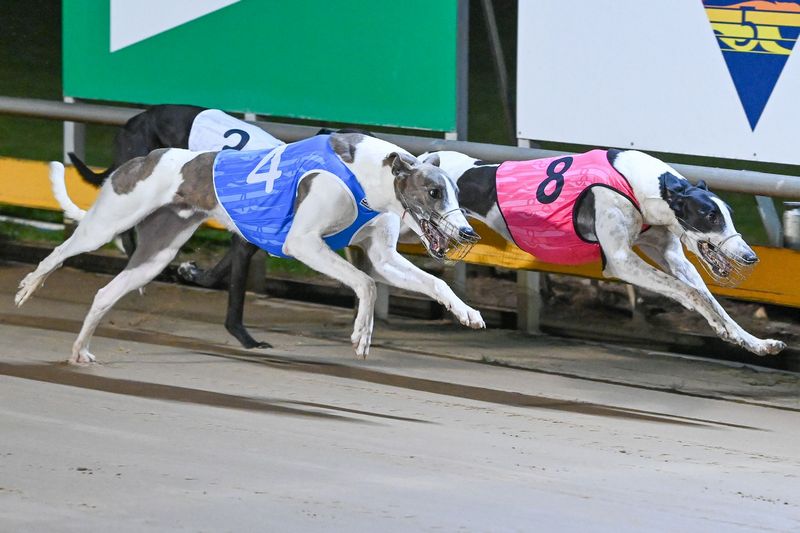 The Tony Brett-trained ORCHESTRATE led in his heat last week but was collared in the last 50 metres by LOUIS RUMBLE who landed a nice little betting plunge. Louis Rumble is trained by the legendary Steve Kavanagh who put the polish on COSMIC RUMBLE, a previous winner of the Flying Amy, and as we know, that dog forged a wonderful career both on the track and at stud.

Louis Rumble has the pace to either cross or match it with Orchestrate early and he has attracted some interest in the market with TAB, moving from $7 into $5.50.

Most of the Flying Amy field may well be seen on State Of Origin night next week and of course the upcoming Brisbane Cup as well. TAB have markets open on all those events as well as the Queensland Cup for the stayers.

The State of Origin selectors will be finalising the squads on tomorrow (Friday). Tune in to Sky 2 on Monday afternoon as the fields and box draws will be announced.

CLASS WILL RISE FROM THE RED

DASHING CORSAIR was one of the best greyhounds to ever grace the track in Australia.

The Queenslander won both the National Distance and National Sprint finals, a feat we will probably never see repeated. It is only fitting that he is remembered with a feature race named in his honour and that race is on the same card this evening (Thursday), the ‘Dashing Corsair’ at Listed level over the 710 metre course.

There was only a length separating the two heat winners, LUCKY HERO (42.23) and ZIPPING NISEKO (42.31) last week, but again the wet weather played havoc with both races and I think we will see some improvement this week from the beaten divisions in both heats.

Lucky Hero was backed from $101 into $41 with TAB Fixed Odds before he took the shortest way home along the rails to beat MAGGIE MOO MOO by ¾ of a length. Maggie Moo Moo had been campaigning successfully in Victoria recently and on reflection, hers was a big effort to run home as well as she did. She has attracted good early support with TAB to win the final, $5.50 into $4.20, and it isn’t hard to see why as she has won four of her eight starts at Albion Park over the longer course.

Zipping Niseko led all the way when she won her heat, that is her style of racing and the main reason why she has the great record of 13 wins from 24 starts. However, Zipping Niseko has drawn out in Box 6 in the final.

There is a stack of potential pace in the race, so where does she end up?

BARSANDI and PUMP IT didn’t begin to the best of their ability in the wet last week. Either one could lead here, as could REGAL ROCKY from Box 8. He probably lacks the miles in his legs to be competitive at this level, but can definitely cause the favourite some early dramas as he will be cutting across.

So, what are we left with?

I have gone with the red runner, CLASSY ETHICS. This time last year, when trained in Queensland, Classy Ethics was one of the best stayers in the Sunshine State and she showed a welcome return to form when running on well to finish second to Zipping Niseko.

That was on the back of a strong win at Richmond over 618 metres and with the good draw, I can see Classy Ethics being right on the pace heading into the first turn and putting that good draw to use. Classy Ethics has been a drifter in the TAB market this week, but I think she is the value outside of the favourite.

Gerard Daffy is part of the TAB Media team based in Queensland. Gerard can be heard daily on RadioTAB which includes his popular Thursday morning program, On The Lure and Sky Sports Radio.