Boomba wins his ticket to 3YO Sprint

Singapore Golden Horseshoe winner Boomba graduated to his first win in open company with a dashing display at Kranji on Saturday.

A little worse than midfield in the early stages of the $50,000 Class 4 Division 2 race over 1400m, the Showcasing three-year-old slid up ever so surreptitiously from the 800m before popping up as the horse to run down coming off a lightning move around the home turn courtesy of an inspired ride by champion jockey Vlad Duric.

From thereon in, it was one-way traffic to the wire. A horde of swoopers came baying for blood, but Tim Fitzsimmons’ charge was always well clear and out of reach. 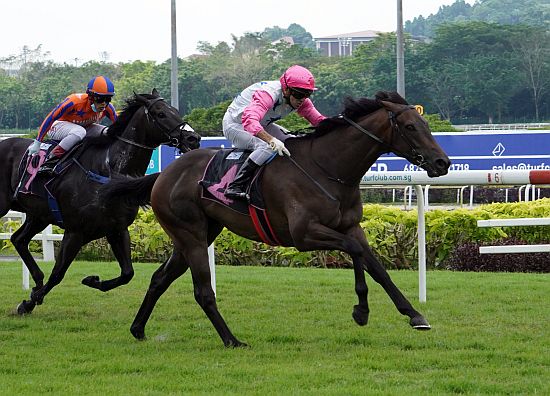 In a phalanx-like formation, five horses finished across the track, with the battle for the minors going to The Executioner (Danny Beasley) just holding the fast-finishing Glasgow (Tengku Rehaizat) at bay by a nose.

The run-on then had Zygarde (Saifudin Ismail), Hadeer (Mohd Zaki) the pacemaker and Billy Elliot (A’Isisuhairi Kasim) finishing in that order, with nothing in it: head, neck and head.

The nominal favourite for a long time, Boomba eventually drifted to $23 (Inherit was installed favourite at the off) and clocked 1min 22.67secs for the 1400m on the Short Course.

Bolstered by the manner of the win, Fitzsimmons can already fill out the nomination form for the Group 3 Singapore Three-Year-Old Sprint (1200m) in three weeks’ time on June 27, not to mention, twist someone’s arm for the steering duties.

“Vlad gave Boomba a gun ride. I hope he sticks to him in the first Leg of the 3YO series,” said the Australian handler in reference to the Sprint, even if technically, it isn’t the first Leg given that the Singapore Three-Year-Old Challenge is off the feature race menu this year with the cancellation of its traditional grand final, the Group 1 Singapore Guineas (1600m).

“I was very happy with his last run (second to Just Landed in a Class 2 race over 1200m) as the wide barrier and the E course made it difficult. He has come on since.

“I was slightly worried as he went for home a bit early, but he was strong to the line, it was an excellent effort. He doesn’t have a lot of gate speed, but he finished off nicely.”

At only his seventh start, and third this prep, Boomba now boasts a smart record of three wins, one second and one third from seven starts for stakes earnings that have tipped over the $150,000 mark for the Barree Stable.

The Australian outfit, winners of the highest accolades in Singapore with its two superstars Debt Collector and Inferno, was interestingly capturing its first double at Kranji after recombining with Fitzsimmons with $14 favourite Don De La Vega to take out the opener, the $30,000 Class 5 Division 1 race over 1600m.

Fitzsimmons, who assisted the handler of Baree’s champion duo, former Kranji trainer Cliff Brown, from Day 1 until he went his own way in 2019, was also rapt with that first hurrah (later a double for good measure) for the Melbourne boys in pink and white. Duric was also the pilot on Don De La Vega.

“We’ve been waiting for that race for Don De La Vega as there are not a lot of Class 5 races over the mile. We had pigeonholed that race and it was a good plan that came off.”

A six-year-old by Lope De Vega, Don De La Vega has taken his record to four wins and eight placings from 34 starts for prizemoney in excess of the $180,000 mark for the Barree Stable.

Fitzsimmons and Duric later went on to bookend the meeting with Relentless ($20) in the last race, the $50,000 Class 4 race over 1600m to give each other a winning treble, an upmteenth one for the champion jockey, but a first for the trainer.

Long time in the chasing pack, Duric has with that big haul, for the first time put a healthy space at the top of a premiership he won in the last four seasons. The mercurial Australian now stands four winners clear of Marc Lerner (out suspended, and who, ironically, would have probably ridden Relentless) on 24 winners.

As for Fitzsimmons, he has leapt five spots to spring to sixth place on the trainers’ log on 11 winners, a score which is more than double his 2020 performance (five winners and last year’s wooden spoon recipient, barring Saimee Jumaat who ended his tenure on a zero score). A few knockers might have wondered about his training chops when he ended his rookie season in 2019 with no winners to his name, but they would be well and truly silenced now.

After kicking off with a stable comprising mostly average older horses and new ones who were struggling to get a run through the balloting system, Fitzsimmons needed more time for his string to find their feet, and with the added influx of horses from Brown (like Boomba and Don De La Vega) when the latter returned to Australia in March, he finally has the ammunition to prove himself.