Bon’s A Pearla (by Bon Hoffa) will be given the chance of chasing a Group 1 dream for her connections after scoring an upset win at Caulfield.

The Kevin Corstens-trained filly came with a late flourish to claim the $300,000, Group 2, Thousand Guineas Prelude (1400m) on Saturday to set up her chance of success in the Group 1 Thousand Guineas (1600m) at Caulfield on October 13.

Bon’s A Pearla was not among the original entries for the Group 1 contest when they closed in early August, but Corstens said the filly deserves her chance in a little over three weeks.

Providing jockey Jason Maskiell with an important win at stakes level, Bon’s A Pearla ($31) registered a half-neck win from the $3.60 favourite Heresy (by Street Boss (USA)), with Elusive Express (NZ) (by Jakkalberry) three-quarters-of-a-length away third at $12.00.

Bon’s A Pearla had won a Sandown maiden over 1400m at her previous outing in similar fashion to Saturday’s victory at higher level.

“We’ve always liked her,” Corstens said. “Even when we had her first in the stable, we were patient with her, and after her last start I still said that there was plenty of improvement in the coat.

“She still has improvement to come and hopefully we get it.”

Maskiell has had his ups and downs in the racing industry and was rubbed out in 2013 over a failed drug test, but has fought his way back. He said he has worked hard to resurrect his career and was grateful for the support of Corstens and fellow trainers.

“He asked me how I’d go with the weight, and I said it’s easy to do it for a horse you believe in,” Maskiell said.

“Obviously everyone knows about my downfall and to come back, come back in a big way, it is probably the biggest race I’ve won since I’ve been back, and it is just a great thrill.” 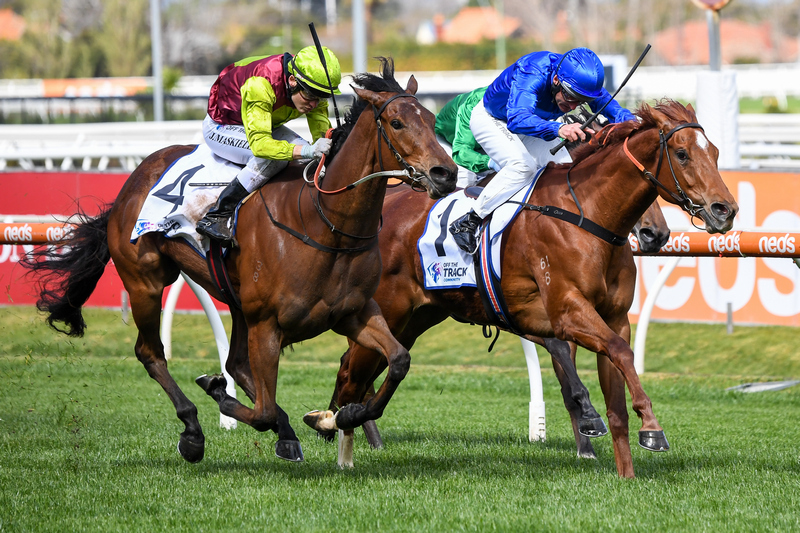 Bon's A Pearla and Jason Maskiell with Heresy and Damien Oliver inside, picture Racing Photos

Jason Maskiell enjoys his greatest moment in the saddle - GROUP 2 success aboard Bon's A Pearla!