Bold Thruster took one step closer to his racing comeback after he was seen looking as bright as ever at his first barrier trial from a break on Tuesday at Kranji.

Ridden by Silver Bowl-winning partner Louis-Philippe Beuzelin, the bold black galloper was always in command once he whipped around five runners to assert his superiority, even if Sacred Gift (Hakim Kamaruddin) closed down late to cut the margin back to a neck on the line.

The Turffontein five-year-old last ran in the Group 3 Silver Bowl (1400m) which he claimed by staving off stablemate Top Knight after leading all of the way on February 29. 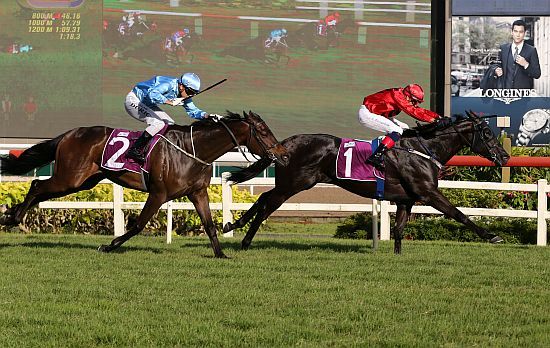 Five months have since elapsed, but the Tivic Stable-owned galloper still looked a million dollars at the trials, and more to the point, his barrier manners were faultless.

Bold Thruster is known to have cost himself a few races after bombing the start, even if that chink in his armour was almost ironed out at his last couple of starts.

“He was good in the barriers today. He had his ordinary moments before,” said trainer Michael Clements.

“He then cruised around at a good pace. I was very pleased with that trial.

“He will have one more trial next week, and will then go straight to the Merlion Trophy.”

In the meantime, Clements will worry about his next batch of runners (nine) this Saturday, including his trio of Class 3 gallopers split into two divisions of the 1200m race, both worth $70,000 in prizemoney.

Japanese-bred five-year-old Quarter Back (x Empire Maker) runs in the first division while Siam Royal Orchid and Trapio, interestingly both five-year-olds by Shamus Award, are paired up in the second division.

The trio are also making their racing comeback since the Circuit Breaker three-month suspension, with Clements happy their conditions have not gone backwards during the downtime.

“Quarter Back is in a strong race with Mr Malek and Rocket Star, but he’s going good, and he races good fresh. It’s a prep run over six furlongs, but he’ll step up to seven furlongs after that,” said the Zimbabwean-born conditioner.

“He doesn’t carry a lot of condition. The break has done him a world of good and he’s come back in good shape.

“He’s had quite a few track gallops and barrier trials. I feel he’s now in the right place in the handicap.

“Siam Royal Orchid is also resuming from a break. His first trial was quiet but he picked it up a lot better in the second trial.

“He’s a lazy type of horse, but the good thing about him is he can hold a position and run on from a hot pace upfront.

“He’s a progressive horse and has taken time to mature. He’s been improving lately.

“As for Trapio, he is coming off a last-start win in Class 4 and will be up in class this time. He’s also a light-framed horse.

“He’s done well in trackwork and is a horse who runs well fresh. His best races have been off a break.

“He’s had a good prep and I’m happy with his condition. I haven’t had a chance to look at the handicaps, but he’s up in class, and it’ll be interesting to see how he goes.”

On top of the heap for a long time, even before the COVID-19 break, Clements handed up the lead to reigning champion trainer Mark Walker following the latter’s massive haul of five winners on Sunday. Clements had a narrow one-win lead but now trails his Kiwi rival by three winners (29 versus 26) after hitting back with only one winner, So Hi Class.