Blake Shinn is hopeful Excellent Proposal can continue to flourish

Shinn capitalised fully on his first ride on John Size’s talented gelding by winning the Hong Kong Classic Mile (1600m) on 24 January, defeating many of the rivals he will face this weekend.

Bidding to become one of Hong Kong’s elite riders, Shinn oozed confidence ahead of the second leg of the lucrative Four-Year-Old Classic Series.

“Obviously, I’m going into a big race as confident as I can after his last start win,” Shinn said.

“He’s pretty much going up against the same field, he’s drawn a better barrier (gate five, compared to gate 10 in the Mile), he’s trialled nicely, won at the distance.

“He ticks a lot of the boxes, so I’m just delighted to retain the ride and have another big chance at another big race in Hong Kong.”

While Shinn barely flexed a muscle in a low-key hit-out, he was buoyed by the promising galloper’s improvement. 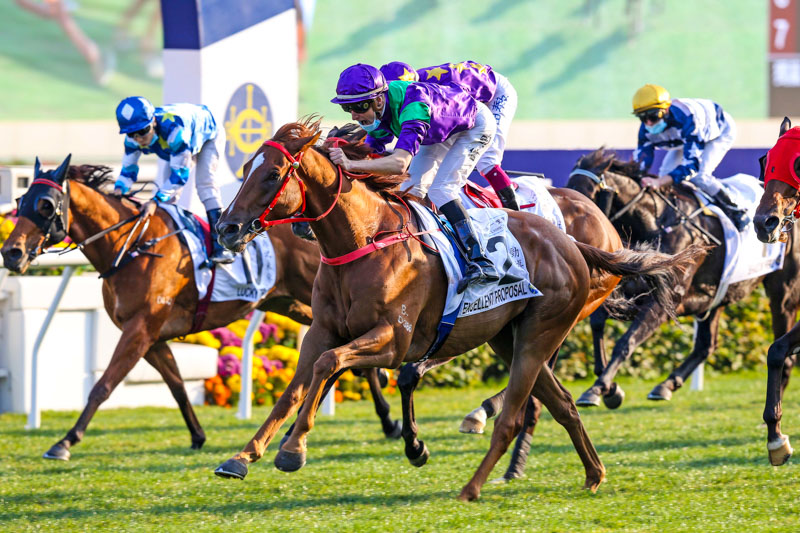 “Judging by the horse in his trial, the signs were positive to say he’s taken a step forward,” Shinn said, explaining his overall Hong Kong ambitions.

“When I came to Hong Kong, I wanted to be regarded as one of the leading riders here and I haven’t achieved that yet.

“I’ve won a Classic Mile and if I can win a Classic Cup and some of the feature races that will hopefully propel me to where I want to go.

“I think I’ve got a great chance to do it at the weekend and let’s hope he can do it.

“It’s very important - these are the opportunities to get me where I need to be. At this point in time, I’m grateful to Mr. Size for keeping me on the horse, giving me the opportunity in the first place.

“I was glad I could deliver in the first leg of the series – he’s a talented horse. I’m looking forward to it.”

Karis Teetan will be among 13 rivals attempting to realise their own objectives in a race regarded as vital to the BMW Hong Kong Derby (2000m) on 21 March at Sha Tin.

Lucky Express was beaten only three quarters of a length by Excellent Proposal last month and Teetan hopes his charge is still on an upward trajectory.

“It’s a good sign stepping out over a bit further now - I think the way he has been finishing off the race is a good sign.”

Teetan, who claimed the Hong Kong Classic Cup on Thunder Fantasy in 2015, concedes he has a slight stamina query over Lucky Express, a son of Toronado who is yet to win beyond 1200m in either Hong Kong or Australia, where he raced successfully as Prince Of Sussex.

“It (stamina) is a question mark, but if we ride him the same way – switch him off – he does have a turn of foot so if we can save his energy for the last bit then he can run well again,” Teetan said.

“It (the race) is very open. The horse that won the Mile for John Size (Excellent Proposal) last time looked very promising.

“With a bit of luck and a good run he could run very well.”