Favourite Big Green Hat got up in the nick of time to score his first win for Hong Kong owner Matthew Li Man Hei in the $20,000 Maiden race over 1000m at Kranji on Sunday.

Trainer Shane Baertschiger and Li liked the three-year-old gelding presented at the 2020 Inglis Sydney Ready 2 Race Online Sale and bought him for $A130,000. Big Green Hat is the first and only progeny of Group 1 Inglis Sires’ Produce Stakes (1400m) runner-up Odyssey Moon to race in Singapore.

The white-faced gelding showed ability when he was placed five times at his nine starts. Though he was worn down late by Super Incredible at his last start, first-time partner Manoel Nunes would not let the win slip by this time. 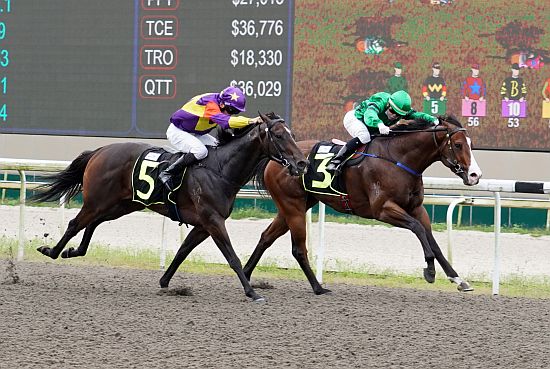 Big Green Hat jumped well from barrier 10 and coursed out three wide, camped on the outside of leaders Ninetysix Warrior (Iskandar Rosman) and Fabu (Koh Teck Huat) on the rails.

At the 250m, the $9 favourite began to pull away under the urgings of the Brazilian hoop.

After stalking the leaders, the Jason Ong-trained Fighting Hero (Danny Beasley) closed in on the outside to finish on the same line with Big Green Hat at the wire, but the photo finish revealed that Big Green Hat hung on by a nose.

City Hall (Hakim Kamaruddin) finished another two-and-three-quarter lengths away in third. The winning time was 1min 0.09sec for the 1000m on the Polytrack.

Baertschiger rued the Hong Kong-owned gelding’s lack of luck at the draws, but was rapt in getting a winner for Li.

“He has no luck at the barriers! He has drawn outside at his last seven starts,” said the Australian handler.

“We tried to go forward from the wide barrier, but he got caught three wide again.

“The second horse (Fighting Hero) had a perfect run behind, so it was a good tough win to hang on given he was three wide the whole way.

“I actually thought the 1000m would have been too short for him, but it was the only race on the programme. So, we thought we'd let him have a go at it.

“He is the owner’s first horse in Singapore, so it’s good to get a winner for him.”

The fact that Big Green Hat broke the duck at his 10th start also gave the Baertchiger-Nunes combination their first win in a long time. The leading jockey has only ridden twice for Baertschiger at his current stint, with the first aboard Nepean on January 22.

“I want to thank Shane for giving me the ride because I don’t ride for him often. Very happy to get a winner for him and the owner,” said the tearaway leader on the jockeys’ premiership this year.

“It got a little bit tight in the end, but I had confidence that I won the race because my horse put his head down first.

“I had to work a bit to cross them from the (wide) barrier to put him up there, while the other horse (Fighting Hero) had an easy run.

“It’s still a good win considering that I had to push him a little at first.”

The three-time Singapore champion jockey returned empty-handed last Saturday, but he has bounced back with a treble aboard two other favourites, Dancing Light ($9) and Resurgence ($22) for trainer Tim Fitzsimmons in the $50,000 Class 4 Division Race 2 over 1000m and $30,000 Class 5 race over the mile respectively.

With that first win and five placings under his belt, Big Green Hat has earned more than $32,000 in prizemoney for Li.