Be You hands Wong 200th winner in Singapore

A valiant win from Be You in the $50,000 Countofmontecristo 2017 Stakes gave jockey Wong Chin Chuen his 200th win in Singapore on Saturday.

Take nothing away from the win, though, as it could have been a different outcome if not for an unlucky Boomba who blundered at the start of the Class 4 race (1400m) and still flew home for second.

But Be You ($21), who had a smoother run in-transit, hung on by half-a-length, with Lucky Imperator (Iskandar Rosman) in third another head away. The winning time was 1min 22.4secs over 1400m on the Long Course. 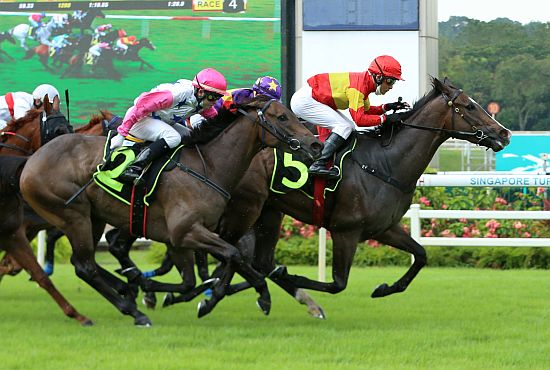 It was hard luck for Boomba and Manoel Nunes, but joy for Wong, even if the latter was not quite aware of the milestone he just achieved.

“It’s another milestone I have achieved here since I rode my first winner in 2015, but no matter what, I still have to work hard."

Wong made his riding debut in Singapore in July 2015 as an apprentice jockey, opening his account shortly after when he steered Secondwave to victory for ex-Kranji trainer David Hill.

Twice crowned Singapore champion apprentice jockey in 2016 and 2017, Wong also won two Group 3 races, before claiming the highlight of his career to-date: the Group 1 Kranji Mile (1600m) atop the Daniel Meagher-trained Lim’s Lightning on May 21 this year.

Be You's win may not come with the same glittering aura, but Wong is no less grateful for the opportunity.

“I've been helping to ride trackwork for some of Shane’s horses because he’s short-handed at the moment with Matthew (Kellady) injured," he said.

“So I’m thankful that I got the chance to ride for the owner (Auric Stable).

“Coming into the straight, I thought he could win, but I was worried at the last 50m because when we hit the front because the horse was a bit lost.

“There was also pressure from the outside (Boomba) and other horses were coming up, but we’re lucky we got to the post first.

“He only stopped a bit when we hit the front, so the mile shouldn’t be a problem for him next time.”

Kellady, the regular race-partner of Be You and Baertschiger’s no. 1 stable jockey, has been on the sidelines since he fractured his right ankle in a trackwork accident two weeks ago.

“We have 30 horses and only two track riders, so it’s good to have a few jockeys like Jake (Bayliss), Shafrizal (Saleh) and CC (Chin Chuen) help us out at trackwork,” said Baertschiger, who bagged a double after Shang Chi (Bayliss, $19) took out the $50,000 Kiwi Karma 2015 Stakes, a Class 4 division 2 race over 1200m two races later.

“Matthew went for a check-up yesterday, and hopefully if all goes well, he can return to work in two weeks’ time.

“Be You had been knocking on the door and looking for the 1400m, but there was none on the programme.

“It’s probably his lucky day because the second horse (Boomba) blew the start, but that’s racing.

“We’ll put him through his grades, and probably find another Class 4 race for him.

“I’ll talk to CC and see if he could go up to the mile, because he used to lead in his races early, but now we’ve taught him to take a sit.

“It’s good to give CC his 200th winner in Singapore, too. It’s also great to get another win for Jerry Sung who has been a big supporter in Singapore for a long time.”

With that third win and six placings from 15 starts, Be You has now amassed more than $170,000 in prizemoney for the Auric Stable.