Charlie Hills-trained Battaash, the highest-rated horse among the hundreds worldwide carrying the Shadwell blue and white of HH Sheikh Hamdan bin Rashid Al Maktoum, is on schedule for his 2020 and six-year-old debut, per his conditioner. The gelded son of Dark Angel returned to Hills’ yard at Faringdon Place in mid-March and has been incrementally amplifying his preparation.

“He’s come back very well,” Hills said. “He was a little more wintry than last year, but the last couple weeks, his coat has really been coming through. He’s physically done well and I’m happy with him. He’s had one swinging canter and we’re just trying to keep him ticking over. He’s not a big horse, so he doesn’t take as much training and is a good, clean-winded type.” 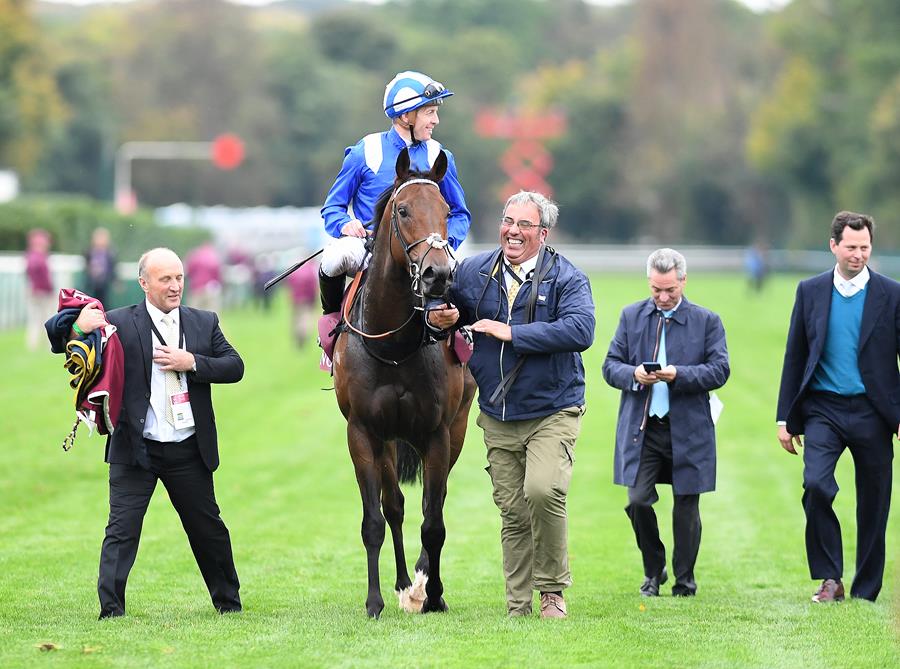 In 2019, the 126-rated sprinter cut holes in said wind, winning three of five, including an otherworldly performance in the Group 1 Nunthorpe Stakes at York Racecourse. Annihilating the course record by 1.4 seconds, he stopped the clock at 55.90 seconds for five furlongs.

Earlier in the season, he was an admirable runner-up for the second consecutive year to subsequently crowned champion sprinter Blue Point in Royal Ascot’s Group 1 King’s Stand Stakes.

This year, the multiple Group 1 winner of 10 from 20 whose massive 136 Timeform mark makes him the top-rated horse in Europe, will hope the third time is the charm in the King’s Stand—but he likely must run without a prep. Thanks to the ongoing COVID-19-related complications on racing in Great Britain, his foundation run in Haydock’s Group 2 Temple Stakes has been toppled.

“It depends on how they program the rest of the year for him, but I don’t think we will be able to get a prep in before Royal Ascot, unfortunately,” Hills continued.

“The race we would use has been abandoned, so we’ll go straight to Ascot. I don’t think anyone knows how it will all happen, but hopefully they do run it and all goes well. He should stay fresher later on into the year and we’ll be able to keep him going well, hopefully.”

Hills also expressed excitement regarding his two-year-olds who are set to carry the famed Shadwell silks this year, many who did their breaking and early training from fall 2019 through spring 2020 at the renowned Dubai Stables.

“I am really happy with the ones I’ve seen,” Hills said.

“A son of Ghanaati arrived a couple weeks ago and he looks like a really nice horse. He’s the best-looking of any of hers that I’ve seen. I’m really happy with them.”

Ghanaati, from just six starts, won the 1000 Guineas (G1) and Coronation (G1) before placing in both the Sussex Stakes (G1) against males and Sun Chariot (G1) against older fillies and mares. Her offspring include 2019 Royal Ascot winner Afaak and Mahab Al Shimaal (G3) winner Wafy.

After the retirement of long-time USA-based Shadwell trainer Kiaran McLaughlin (conditioner of such icons as Invasor, Frosted and Tamarkuz) in April, a fellow previous disciple to the great D. Wayne Lukas, seven-time champion trainer Todd Pletcher, was appropriately ‘tapped’ as his successor. The 52-year-old native of Dallas and 11-time Breeders’ Cup winner has inherited a promising group of horses, especially in his three-year-old ranks. 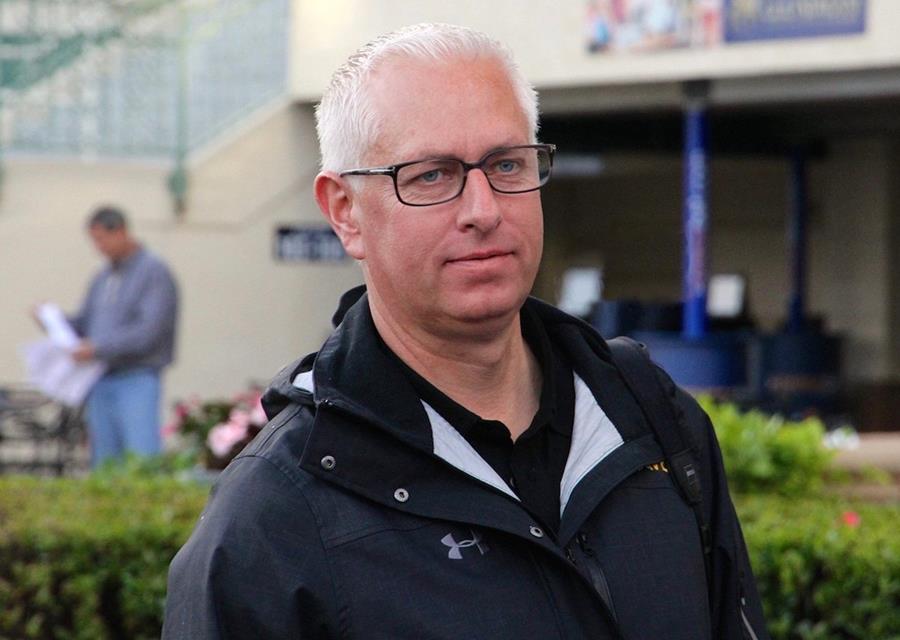 “It’s a tremendous-looking group of horses and a real tribute to the programme,” Pletcher said.

“They’re not only well-bred, but conformationally very good-looking individuals. The ones that we got in from Kiaran were in excellent condition. We’re starting to get a few in from South Carolina and those are looking well. We’re excited about the opportunity and are very enthused about training for Sheikh Hamdan and Shadwell.”

A quartet of sophomore colts whose names all happen start with ‘A’ highlight the roster, including recent maiden-placed Ajhar and Ashiham, as well as unraced new arrival Ashaab and Grade 2-placed Ajaaweed, who is scheduled to return in the fall after a freshening.

Ajhar, an $800,000 Keeneland September 2018 purchase and son of Tapit and G2 winner Jojo Warrior, was an unlucky third, hitting the gate at the start on May 2 over 1 1/16 miles at Gulfstream Park. Meanwhile, Ashiham also an $800,000 son of Tapit (and a grandson of Horse of the Year Azeri), was an eye-catching second on April 25 over seven furlongs. Ashaab is by Tapit and a homebred out of stakes-winning Danzig mare Wasseema. Ajaaweed is by Curlin and was second in the Remsen (G2) at Aqueduct in December before returning with a respectable third in the Sam F. Davis Stakes (G3) at Tampa Bay Downs in February.

“Ajaaweed is back at Shadwell (Farm in Kentucky) getting a little break after a minor setback, so hopefully we see him in the fall of the year,” Pletcher reported.

“With Ajhar, I’m honestly a little disappointed that we didn’t get the job done, as he’s trained really well, but he missed the break a touch and our strategy from the one-hole in a mile and sixteenth race was to try to be prominent. He ran a respectable third, but there’s more there. 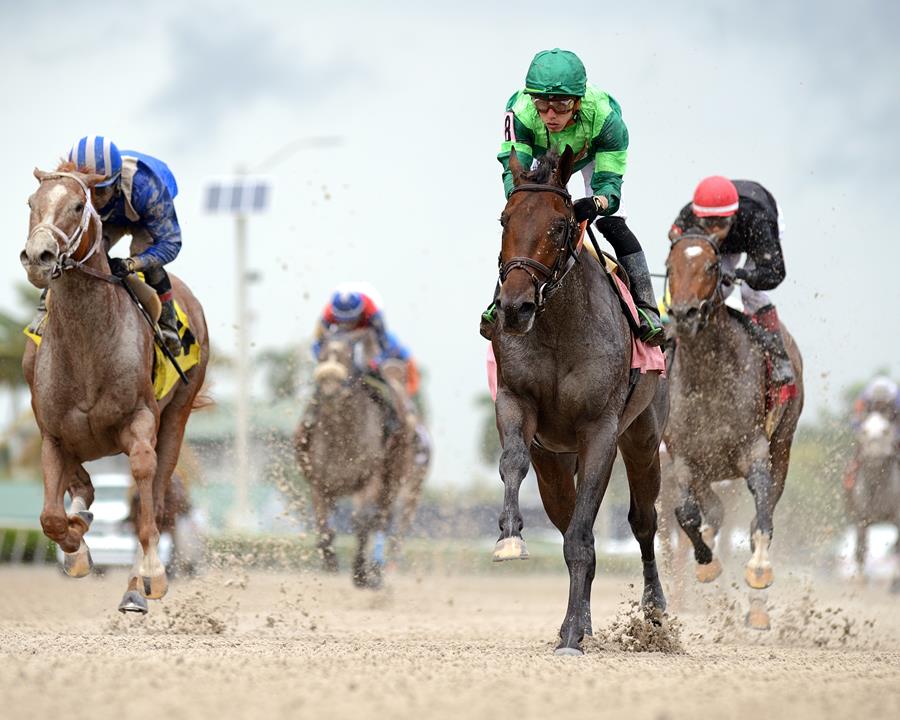 "Ashiham (pictured, far left) closed really well going one turn and he’s a horse who should enjoy going two turns and improve a lot from that run. We also have Ashaab, who they thought highly of; a beautiful horse and one we will have high expectations for.”

A third $800,000 purchase by Tapit now in the barn is filly Prairie Wings, who continues to work well toward her next start. In her second outing on April 12, she was a quick-closing second in one-mile dirt maiden company at Gulfstream. She has a pedigree—being out of a Sadler’s Wells half-sister to Giant’s Causeway—to run well on virtually any surface.

“Prairie Wings breezed well this week and is a quality filly,” Pletcher continued.

“She got into some traffic in her last start and she should be in good shape for her next start. I am hoping to stretch her out around two turns. It doesn’t look like I’ll have that opportunity at Gulfstream, so hopefully she can draw into a race at Churchill. We may be forced to run her one more time going a one-turn mile at Gulfstream and with an appropriate trip, she should be able to get that done. (The grass) is in the back of our minds, but from the way she has run, I think she is very capable on the dirt.”

Meanwhile, the winner of $390 million in prize money, 4,912 races and 158 G1s remains focused on making the most of this phenomenal opportunity, especially as a handful of well-bred six- and seven-figure Shadwell 2-year-olds have started to arrive in his care.

“We want to perform well for everyone and it’s a welcome amount of pressure,” Pletcher concluded. “I know from seeing the horses they’ve purchased at the sales and the quality of the breeding program, that these are horses we rightfully should have high expectations for and we’re hoping to meet those goals.”

Tamarkuz to have first starter

One of the most accomplished dirt milers of the past decade, Tamarkuz is scheduled to have his first starter as a sire on Thursday at Churchill Downs.
The winner of both the Breeders’ Cup Dirt Mile (G1) at Santa Anita Park and Godolphin Mile (G2) at Meydan Racecourse will be represented by Cool Enough in the day’s first race, which is scheduled for 1:00 p.m. local time, 9:00 p.m. UAE time.

Owned by Rashid’s Thoroughbred Racing and Kingdom Bloodstock, Cool Enough is a grey 2-year-old filly out of the Macho Uno mare Make Waves. She is trained by Phil Schoenthal.

“We are very excited about seeing the first runners for Tamarkuz,” said Rick Nichols, Vice President & General Manager of Shadwell Farm (USA). “We have heard a lot of good things about them. Many of them look like they are going to be early. I know John Hyde was very pleased with the ones at Dubai Stable. Tamarkuz has 34 in his first crop. His second crop will be larger.”

Tamarkuz’s stallion page could get a little added bonus on Monday, as the son of Speightstown’s G1-winning half-brother, Without Parole, starts as one of the favourites in the Shoemaker Mile (G1) at Santa Anita. In November, the son of Frankel was third over the same course and distance in the G1 Breeders’ Cup Mile. Their shared dam, Without You Babe, is a half-sister to a pair of Belmont Stakes runners-up, Travers (G1) victor Stay Thirsty and Andromeda’s Hero.