Looking to seal his place in the 2021 LONGINES International Jockeys’ Championship (IJC), Alexis Badel has armed himself with six chances at tomorrow night’s fixture at Happy Valley as he hopes to suppress all possibility of a last-minute snatch-and-grab by Karis Teetan.

Leading the Mauritian by three wins (18 to 15) this season, Badel is in pole position to seal the coveted spot and join the 12-rider roster for next month’s HK$800,000 challenge on Wednesday, 8 December at the city circuit.

Two slots remain, one is for the highest-ranked rider in the local championship (who isn’t already selected to participate) which is currently Badel; the other is for the leading homegrown rider this term, occupied by Vincent Ho, who boasts a four-win buffer over Matthew Chadwick.

Having finished joint-third (shared with Hollie Doyle) in last year’s LONGINES IJC, Badel could join Zac Purton, Joao Moreira and most probably Vincent Ho as one of Hong Kong’s representatives this time around with the conclusion of tomorrow night’s fixture determining the line-up for this year’s LONGINES IJC.

With no shortage of opportunities across the eight-race programme, one of Badel’s leading hopes is the emerging and in-form Cheerful Days, who bids for a hat-trick of wins in the Class 3 Inverleith Park Handicap (1650m) for trainer Francis Lui.

“His form is good, he doesn’t have a good draw but it looks like he’s improving and maybe Happy Valley suits him a little bit better,” Lui said. 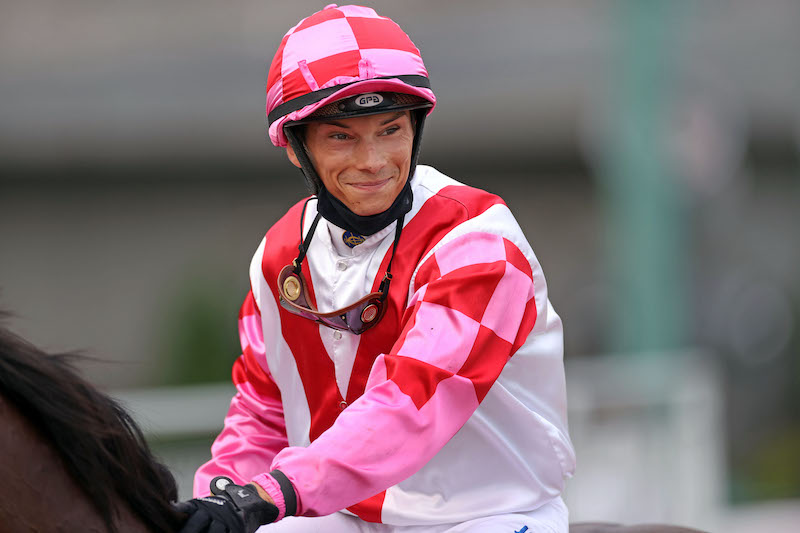 Badel has been in sizzling form with eight wins so far in November, picture HKJC

Badel steered the son of Smart Missile to an improbable win last start, surging from last-to-first in incredible fashion between runners.

The five-year-old, who dons the famed Glorious Days silks, always exhibited glimpses of ability but didn’t realise his potential until two starts ago when winning over 1400m at Sha Tin under the hands of Zac Purton.

“You can see how he runs at Sha Tin. He just can’t finish the race off sometimes but at Happy Valley he’s shown he can do it,” Lui said. “I would say at this stage the mile is his best distance. It suits him.”

Since the beginning of November, Badel has been in sizzling form with eight wins. This season he’s triumphed in a pair of G3 contests, securing the National Day Cup Handicap (1000m) atop Super Wealthy and Sa Sa Ladies’ Purse Handicap (1800m) aboard Tourbillon Diamond.

Earlier, Badel gets the leg-up on Travel Glory for Me Tsui in the Class 4 Stockbridge Handicap (1650m) in which he is allotted 119lb against 11 rivals following his fast-closing first-up effort.

Bidding to unseat Badel and contest his fifth LONGINES IJC, Karis Teetan has seven chances across the fixture, including Keep You Warm in the finale, the Class 2 Bruntsfield Handicap (1200m).

“He’s improved a lot this horse. He won pretty nicely last start following a long break and you can see everything he’s doing is correct. I worked him yesterday and he’s feeling good, he’s in good shape,” Teetan said.

“He’s stepping up in class, so it’s going to be tough but he looks as though he can be competitive in Class 2 based on the way he’s going,” he added.

Also trained by Francis Lui, the four-year-old is looking for a hat-trick of wins — like his stablemate Cheerful Days — but faces stiff opposition in the HK$2.4 million dash.

“He’s improving this season, he’s getting more and more mature just unfortunately he has a bad draw,” Lui said.

Teetan would need an unanswered treble at Happy Valley to leapfrog Badel, leading the Frenchman 25 to 12 with runner-up efforts if there were to be a tie. The 31-year-old won the 2019 LONGINES IJC at his third appearance in the challenge, taking home the mammoth HK$500,000 cheque for first prize.

“It’s going to be tough but I’m going to give it a go anyway. If it’s meant to be it will happen, but I’m just going to focus on riding more winners first, so if it happens then so be it,” Teetan said.

Following his 15th successive win on Sunday, Lui has been pleased with Golden Sixty in the days following the effort as he builds towards next month’s G1 LONGINES Hong Kong Mile (1600m). “After the race he’s been good. I looked at him this morning and he’s fresh again. He’s bright and everything looks fine,” Lui said.