Grant Williams has had his trials and tribulations with Arcadia Queen since arriving in Victoria in July but that will all be forgotten if the Perth mare can win the $5 million Cox Plate.

Williams, who trains in partnership with wife Alana, has had to manage Arcadia Queen’s feet throughout her four-start campaign in Victoria.

And those foot issues also forced Williams to scratch Arcadia Queen from a Group 1 assault in August.

At her last start, Williams bit the bullet and pulled the bar-shoes from Arcadia Queen’s race day gear and the mare did the rest, lowering the colours of hot favourite Russian Camelot in the Group 1 Caulfield Stakes on October 10.

The pair meet again in the Group 1 weight-for-age championship at The Valley on Saturday and hold the top two spots with TAB in betting. 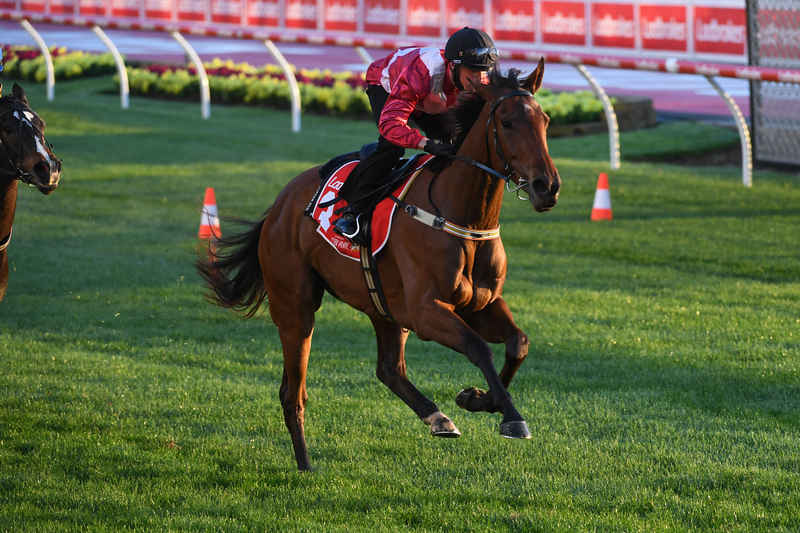 Arcadia Queen and William Pike at The Valley on Tuesday, picture Racing Photos

“She probably pulled up the best out of her last run and hopefully everything is just starting to work out for her,” Williams said.

“We’re getting to the grand final, so I couldn’t be happier with her.”

Arcadia Queen has yet to race at The Valley and Williams took the opportunity of taking the mare to the track again on Tuesday for some extra education.

Even though there will be no crowds in attendance on Saturday, The Valley layout is different to a lot of other tracks.

“When she came here the first time she was probably more relaxed, but it was a bit quieter than Tuesday,” he said.

“It was good because there were lots of horses, people around, so that’s definitely going to help her.

“It’s a little bit different here as well as they’ve got to go through the tunnel.

“You can see her get a bit excited so on Saturday she’ll have done it before and will hopefully be a bit more relaxed.”

Arcadia Queen will be ridden by Willie Pike who will be looking to repeat his victory on the mare from the Caulfield Stakes meeting where he rode four winners on the day including two Group 1’s.

Williams had hoped for gate six before Tuesday’s draw but the mare will start from barrier eight.

After being easy in the betting drifting from $5 to $6 after the draw, Arcadia Queen has since met with support and is now the $5 second pick.

Russian Camelot holds onto favouritism, but has drifted since Tuesday, opening at $4 and now is out to $4.60 while Irish raider Armory sit on the third line at $5.50.

The biggest support outside those three comes from Epsom winner Probabeel who has shortened from $13 to $8 with TAB.