Another Commanding win from Walker-Hakim team

Well backed into $20, Savvy Command lived up to the solid rally to score upon resumption in the $75,000 Novice race over 1200m at Kranji on Saturday.

Unsighted since September when he put in a form reversal to his two earlier promising runs – a debut win followed by a second to the brilliant Heartening Flyer – the Savabeel four-year-old has bounced back to his very best form right away.

A smothered run in midpack had the Mark Walker-trained galloper humming at the top of the straight. Though momentarily held back, he came out like a shot once the split came up at the 250m, going on to beat off favourite Be You (Matthew Kellady) by three-quarter length for an impressive second victory for the Remarkable Stable. 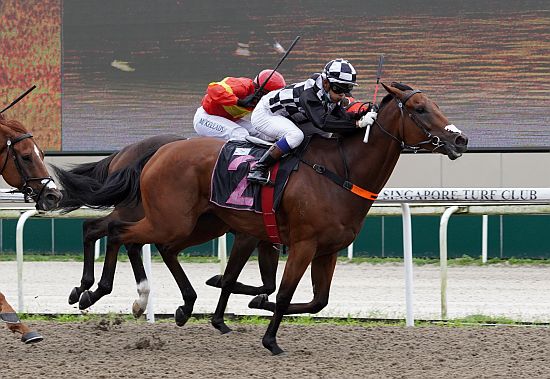 Savvy Command’s stablemate Brutus (Jerlyn Seow Poh Hui) ran on nicely for third another head away. The winning time was 1min 11.79secs for the 1200m on the Polytrack.

Walker revealed the reason for the long absence was not a need to freshen up, but because he had hurt himself after his last start, hence the conviction for his ordinary run then.

“He pulled a hamstring on a wet track at his last start. He had a really nice break after that,” said the Kiwi handler.

“He had just the one soft trial coming into this race. He never gave me a great deal of confidence on the Polytrack, but he went well on it today.

“He’s a horse with plenty of upsides. Being by Savabeel, he will improve with a bit of distance as well.

“I was also quite happy with Brutus’ third. Hakim is riding really well but Jerlyn’s turn shouldn’t be far away either.”

With a riding double (he scored earlier on Wind Of Dubai), Hakim is now nine winners clear of Iskandar Rosman (15 versus six) in the Singapore apprentice jockeys’ premiership.

“The horse was fresh. I just followed Mr Walker’s instructions, get cover, let him relax, and the horse was too good,” he said.

“I’m just lucky my master gives me such good rides and I’d also like to say a big thank you to other trainers for their support as well.”

While the bulk (nine from 15) of his winners hail from his boss, the Kelantan-born rider has also scored two for Desmond Koh and one apiece for Michael Clements, Cliff Brown, Tan Kah Soon and James Peters, trainer of Wind Of Dubai (see earlier report).

In only four starts, Savvy Command has already built a record of two wins and one second for prizemoney fast closing in on the $100,000 mark for the Walker-run Remarkable Stable.