The initial list of provisional emergency runners for The All-Star Mile 2021 has been released by Racing Victoria (RV) on Tuesday in accordance with the race conditions, with Lindsay Park’s Group 1 winner Fifty Stars currently first in line followed closely by three-year-old's Away Game and Tagaloa.

The provisional emergency list comes on the back of the top 10 announcement last Friday, when it was revealed that Grant and Alana Williams’ magnificent mare Arcadia Queen had topped the leaderboard with 15,105 votes.

Following Monday’s acceptance stage, the connections of 36 All-Star Mile nominees have stated their intention to remain in contention to be one of the four emergency runners which will be declared ahead of the official barrier draw on Tuesday, 9 March.

The emergency runners for the world’s richest mile race, which will be held for the first time at The Valley on Saturday, 13 March, are chosen in order of prizemoney earned – excluding bonuses – in races from 1200m to 2050m (inclusive) since 1 February, 2020.

The four highest-ranked provisional emergencies at the final acceptance deadline of 10am (AEDT) on 9 March will be declared the official emergencies. They will not be assigned a barrier but, should they gain a start in the race, will assume the gate of the horse they replaced.

The list of provisional emergencies will be updated between now and 9 March if a horse either secures one of the five All-Star Mile wildcards, wins additional prizemoney or is withdrawn by its connections.

A wildcard will be offered to connections of the winner of this Saturday’s Group 2 Blamey Stakes (1600m) at Flemington – in which Fifty Stars is aiming for an unprecedented hat-trick of wins – with the remaining four wildcards to be announced next Monday (1 March).

Any horse is eligible for an All-Star Mile wildcard, irrespective of whether or not they were amongst the original nominations.
Should any of the top 10 vote-getters or wildcards withdraw from The All-Star Mile 2021 between now and the final acceptance deadline, the first provisional emergency at the time of their withdrawal will take their place in the 15-runner field.

Should any of the starters be withdrawn between final acceptances and the scratching deadline of 7.30am on raceday, the traditional rules of racing will apply.

The All-Star Mile 2021 provisional emergencies list, as of 23 February, is as follows: 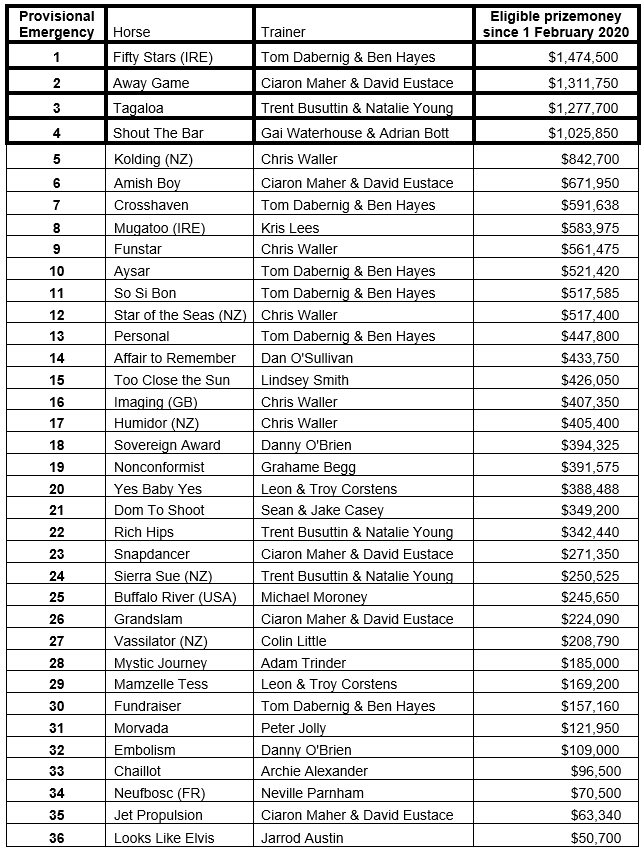