Aethero and Regency Legend catch the eye at the trials

Karis Teetan was grinning like a cat with cream after riding John Moore’s rising sprint star Aethero in a barrier trial at Sha Tin on Tuesday morning.

“He reminded me a bit of Able Friend so let’s hope I can do well on him,” the rider said after partnering the chestnut for the first time.

Teetan slipped aboard Aethero for the morning’s second batch in preparation for the gelding’s next outing in the Jockey Club Sprint, for which he will carry a featherweight 113lb as a Southern Hemisphere three-year-old.

“You just jump on him and he gives you the feel of a good horse,” Teetan enthused.

“It was nice to sit on him. John Moore just wanted him to have a nice, easy trial and he’s got plenty of speed so I let him go through his gears to get him ready for November 17.” 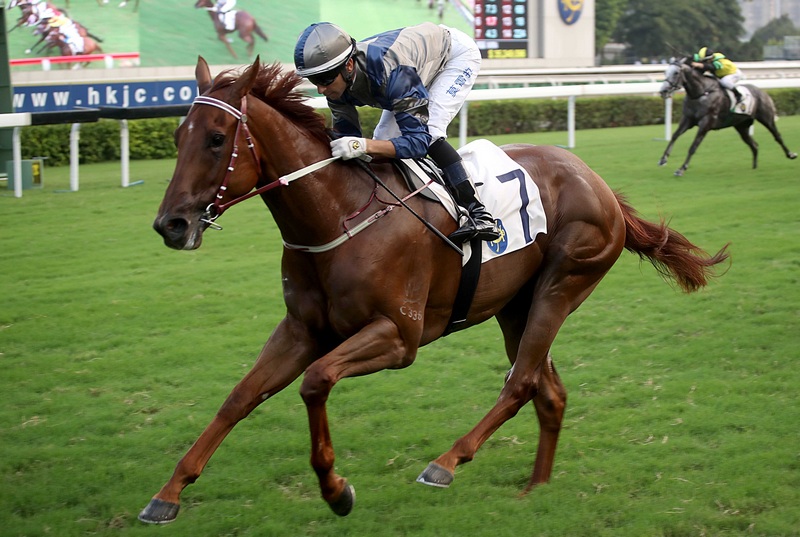 Aethero rolled through his trial with impressive ease, finishing ahead of the rest in a time of 58.15s.

“He wouldn't blow a candle out,” Moore said as he watched his latest potential star warm down in the sand yard. “His gate manners were perfect, he got away cleanly and pulled up very clean in the wind. He’s in a better comfort zone now.

“They’re all in that race in a couple of weeks but he’s carrying a postage stamp in weight and it’s going to be something to watch. We’ve got all the newcomers on the block going against the proven sprinters.”

Another of the new kids, the Danny Shum-rained Regency Legend, strode out in the first of the 13 batches and travelled easily under a Zac Purton hold to pass the post third, with Jockey Club Mile entrant Ka Ying Star leading them home in 58.23s.

“He’s a horse that has always had some internal problems so we don't want to bust him 10 days out from a race - I just let him enjoy himself and I think he did,” Purton said. “He’s never had a problem with his action, he’s always been a nice worker and a nice mover and he seems like he’s in pretty good form.

“He’s four from four so it’s hard to be too worried about him. He’s been able to deal with his issues so far and Danny said he’s been scoping clean recently so hopefully they’re behind him.”

Purton was pencilled in to ride Aethero this campaign but the champion jockey does not ride below 118lb and so will be aboard the unbeaten Regency Legend against the Moore runner in the Jockey Club Sprint.

“It was always going to be a tough race with the young horses coming through and the established ones making comebacks - it’s going to be an interesting race,” Purton said.

Former champion sprinter Ivictory is one of five John Size-trained entrants to the Jockey Club Sprint and he strode out in batch 12 over 1050m on the dirt, finishing two and three quarter lengths third behind the smart Big Party and one spot ahead of talented stablemate Full Of Beauty. The six-year-old returned from a long spell with a modest effort first-up in the G2 Premier Bowl Handicap (1200m) last month.

With regular rider Joao Moreira in Melbourne Cup action, Regan Bayliss guided the four-year-old through a comfortable run to pass the post sixth in a 1200m trial on the dirt track.

Young gun sprinter Voyage Warrior ran fourth in that same heat but did not look entirely at home settled behind the leader along the rail and kept on only moderately for Teetan.