Trainer Archie Alexander is eyeing off the Group 2 Adelaide Cup (3200m) at Morphettville in March after Mosh Music made a long-awaited return to the winner’s circle claiming the Clanbrooke Racing Handicap (2400m) at Sandown on Saturday.

Mosh Music won seven of her first 11 starts and Alexander was eyeing a successful 2020 year after the mare finished third in the 2019 Group 3 JRA Cup (2040m) at The Valley.

But things went awry following that performance with Mosh Music forced to the sidelines with a fracture to the knee.

“It was quite a bad injury that required quite a time on the sidelines,” Alexander said.

“The prognosis was always good so we just took our time and she’s come good. While we were disappointed last time, today was her day.”

Saturday’s victory was Mosh Music’s fourth start since returning from the injury enforced lay-off and her first over a staying trip for the preparation.

In a patient ride from Jordan Childs, Mosh Music ($6.50) finished best to defeat Double You Tee ($4.40) by a half-length with Bartholomeu Diaz ($3.80) the same margin off third.

Alexander admitted to concerns when the leaders, Bartholomeu Diaz and the $3.70 favourite Stars Of Carrum, skipped clear with 200m run.

“At the top of the straight I was quite confident that she was going to keep coming, but then there was a moment at the 200 where that gap seemed to be getting bigger and bigger and we weren’t making much ground,” Alexander said.

“I guess the horses in front went hard enough and it is very steep at Sandown, a tough finish. She just kept on coming, she’s very tough and was too good.

“This horse has been a long project. She’s been off the track for a while but we’ve always had big faith in her and thank God she bounced back today.

“We’re thinking something like an Adelaide Cup and when you look at how strong she was over 2400 metres, I think she’ll get further.

“We’ve always thought she’s a really nice stayer and when she started to get a sequence a couple of preps ago, she looked like anything could be in reach for her.” 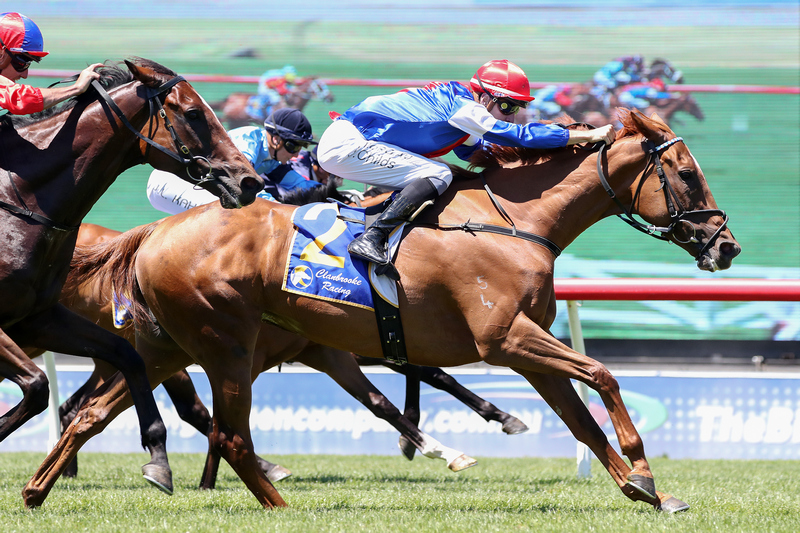 Mosh Music and Jordan Childs in a well timed arrival at the line, picture Racing Photos