26 nominations for The Hunter

Sydney’s racing on Saturday moves to Newcastle for the $1 million The Hunter (1300m) feature on the Newcastle Jockey Club’s nine race programme with 26 nominations on Monday for the 15 capacity field with four emergencies.

Graff and Le Romain share the top line of the opening TAB market with Jason Dreamer’s Bon Amis and Godolphin’s Savatiano at $8.00.

Graff, a four-year-old Star Witness entire, has had three starts this spring with the last a fourth to Brutal (NZ) in the Group 2 Premiere Stakes over 1200m at Randwick on October 5th. Lees sent him to trial over 1000m on the Beaumont Course at Newcastle on October 30th for a win.

Bon Amis was third in that trial after coming off a third in the Group 3 Show County Quality over 1200m at Randwick on August 24th.

Invincible Gem, Brave Song, Home Of The Brave (IRE) and Manicure share the second line of the market at $11.00.

Lees’ six-year-old I Am Invincible mare Invincible Gem has also had three starts for the spring with her best result a first up narrow second to Alizee in the Group 2 Missile Stakes over 1200m at Rosehill on August 10th. She was third in a trial over 1000m at Wyong on October 23rd.

Le Roman comes to the race off a third to Pierata and Trekking in the Redzel over 1300m at Rosehill on November 2nd. Tactical Advantage, at $15.00 on the third line of the market, won his last start in the listed MSS Security over 1200m at Flemington on the Melbourne Cup programme last Tuesday.

The $160,000 Group 3 Sprint Stakes (1600m) for three-year-old’s received 10 nominations including the Waterhouse and Bott trained Hallowed Crown gelding Rule The World  who won the Benchmark 72 over 1400m at Rosehill on November 2nd.

Newcastle’s weather this week is sunny with a cool change on Tuesday after temperatures to 37c bringing the temperatures back to 24c for Wednesday through to 32c for Friday. Saturday’s forecast is for a partly cloudy day with 16c – 29c. 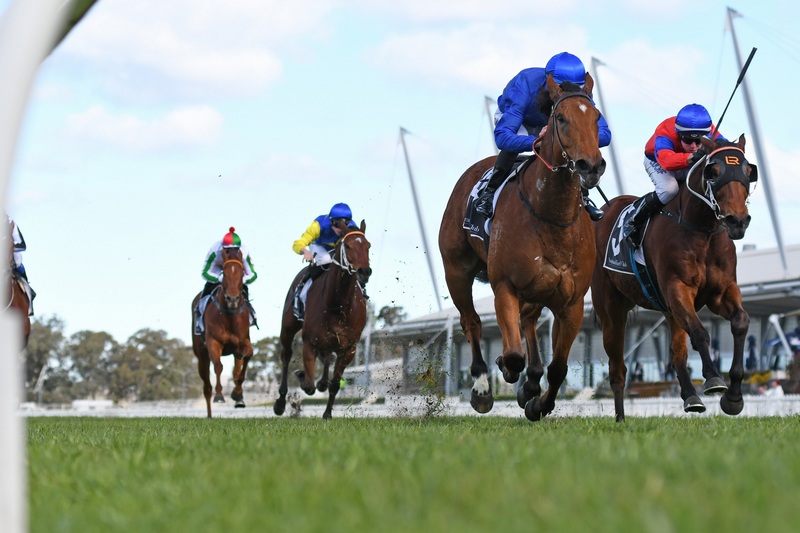 Invincible Gem (blue and red) outside Alizee in the Group 2 Missile Stakes with Le Roman (yellow and blue) in third, picture Sportpix.com.au