The Melbourne Cup Carnival has underscored its position as one of Australia’s top major events and the biggest racing event in the nation. Notwithstanding the wet conditions and headwinds in the industry, Cup Week delivered solid results in 2019 across all areas including racing, wagering, hospitality, employment, sponsorship, media reach and community fundraising.

The fund is part of the Club’s ongoing commitment to the sport’s equine athletes and will enable the acceleration of more of the VRC’s and industry’s plans to support the wellbeing of racehorses across all stages of their lives. The Club will be providing an update on the fund shortly.

Despite the wet weather, Flemington shone bright with the racecourse’s venues including the Birdcage, grandstands, members carparks, and lawns buzzing, with The Club Stand celebrating its first full year of operation, hosting members and their guests.

487 horses, including 12 internationally-trained runners in the Lexus Melbourne Cup, competed across 37 races throughout the week on an outstanding Flemington track surface. The four race cards, offering more than $27 million in prizemoney attracted trainers and jockeys from across the world, and saw 26 individual trainers and 19 jockeys enjoy victory. 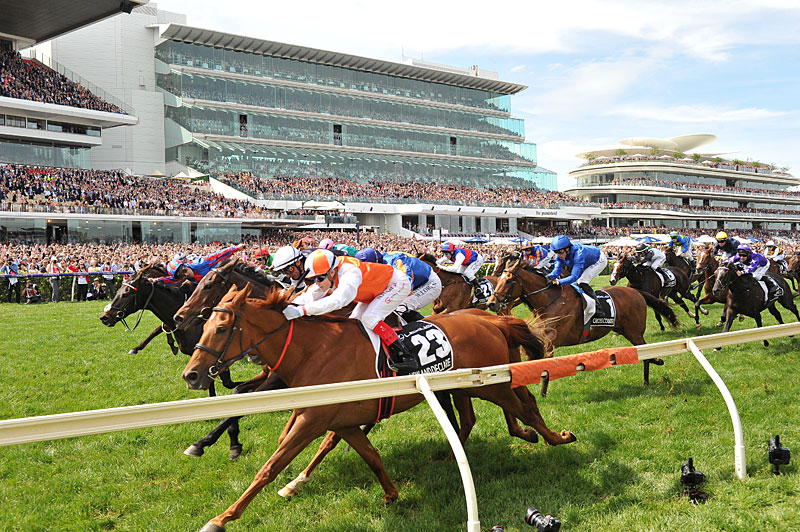 Wagering results domestically overall were slightly down, however the VRC’s revised Kennedy Oaks Day program bucked the spring racing carnival trend with wagering up 7%. International wagering delivered a positive result for all four days of the Carnival, up by 14% for Lexus Melbourne Cup Day, and included a 76% increase in Japan and 39% increase in Hong Kong. Wagering on AAMI Victoria Derby Day, Kennedy Oaks Day and Seppelt Wines Stakes Day was up 36% year-on-year internationally.

The delivery of the 2019 Melbourne Cup Carnival was credit to more than 25,000 staff and contractors working for more than 880 companies in the lead-up and during the event which included the construction and catering for 400 individual marquees.

The reimagined Birdcage Enclosure was a hit with guests, featuring a jaw-dropping new entrance which was a hot spot for celebrity spotting. The Bird Bath Bar was open to all Birdcage guests and the speakeasy known as Larry’s Bar was the most sought after invitation. The all-star lineup of partner marquees included LANDMARK by Lexus, Furphy, Seppelt Wines, Tabcorp, Mumm, Herald Sun, Bumble and Kennedy, which was front row for the first time, coinciding with the announcement of their contract extension with the VRC until 2023. The exclusive enclosure also welcomed Network 10 on the coveted strip with its marquee incorporating a studio for live broadcasts by The Project and Studio 10.

Eight different catering companies were contracted to deliver racegoers exceptional food, drinks and hospitality across Cup Week. 17,546 bottles of champagne were consumed, 16,344 oysters were shucked, 30,596 party pies were eaten, 25,521 cocktails were mixed and 15,166 points of the famed Peter Rowland chicken sandwiches were devoured. More than 77 people were dedicated to filling Flemington’s fridges each day of the Carnival.

The Park was the top general admission destination for a fourth year, showcasing the best of fashion, food and entertainment including big Australian acts Birds of Tokyo and Dean Lewis. Anchored by the Myer Fashions on the Field enclosure, the competition offering more than $430,000 in prizes saw a 20% increase in entrants in the women’s racewear competition.

It wasn’t just those at the track who enjoyed the action, with Network 10’s coverage of the Lexus Melbourne Cup reaching 2.9 million nationally. The Cup was also screened at primetime into the USA on America’s biggest network, CBS, and was streamed to a global audience on Twitter for a fourth straight year, with 60% of viewers from Japan. Across all platforms the total audience was up 4% on 2018.
Lexus Melbourne Cup Day was also celebrated beyond the gates of Flemington with more than 40 race meetings held across Australia and New Zealand and millions attending parties, events and lunches. The VRC’s Cup Day Festival was staged in Barangaroo, Sydney for a third year, attracting more than 11,000 people to the free public live site.

As part of the Club’s community program, Pin & Win – in support of Very Special Kids – raised more than $450,000 and counting in the first year of a two-year partnership. This year marked the 25th year of Pin & Win, with all proceeds supporting an upgrade of Very Special Kids’ children’s hospice at Malvern where it cares for children with life-limiting conditions and provides much-needed family support services.

The Club also donated $50,000 to bushfire-affected Bunyip for community initiatives after the Victorian town was the inaugural winner of the Lexus Melbourne Cup Tour’s National Sweep which saw 24 regional and rural towns represented by a horse in ‘the race that stops a nation’™.

Sustainability is a key part of the Carnival’s success, with the VRC’s caterers redistributing around 500 kilograms of fresh food to people in need through the Salvation Army.

“The Melbourne Cup Carnival continues to drive positive results for Australian racing, and the community more broadly, unrivalled by any other sporting and social event in the nation,” Mrs Elliott said.

“Even with the cold and wet weather, and other industry challenges in the lead up to the event, the Melbourne Cup Carnival delivered the four most attended race meetings in the country with almost 280,000 local, interstate and international visitors travelling to Flemington to enjoy the racing, fashion, entertainment and hospitality of the world’s most vibrant racing event.

“There were outstanding results on the track with spectacular racing on a superb surface, wagering performed strongly despite current trends, and coverage of Cup Week reached millions around the world on television and online.

“Over 25,000 people worked determinedly in the lead up and during the Carnival to deliver a spectacular week and we are incredibly proud of the result for Melbourne, Australia and our place on the global stage.

“Ahead of Cup Week, the Club was proud to announce the VRC Equine Wellbeing Fund which was financially supported by Flemington racegoers, and we look forward to revealing more details about this ongoing initiative in the near future.”

Attention now turns to summer racing at Flemington, with six racedays including the first ever twilight meetings at Headquarters.