12 for the Sydney Stakes at Randwick

Group 3 sprinters do not usually get to race for $500,000, however, courtesy of the rich TAB Everest raceday at Randwick on Saturday, a field of 12 face the starter for that level of prizemoney in the Group 3 WFA Moet & Chandon Sydney Stakes (1200m).

TAB’s opening market after acceptances on Wednesday have the Snowden trained Signore Fox and the Ryan and Alexiou trained Standout as the joint $4.00 favourites.

While Signore Fox is resuming after the six-year-old Exceed And Excel entire’s third in the Group 1 Stradbroke Handicap over 1400m at Eagle Farm in June, Standout was second to Everest contender Masked Crusader in the Group 2 Premiere Stakes over 1200m at Randwick on the 2nd.

They have contrasting barriers with Signore Fox in 10 for James McDonald and Standout in three for Kerrin McEvoy.

Mark Newnham’s Big Parade is on the second line of the market at $4.50. The five-year-old Deep Field gelding was third in the Group 2 Theo Marks Stakes over 1300m to Chat at Kembla Grange on September 11th. He then followed that up by winning the Benchmark 94 over 1200m at Randwick on the 2nd.

Newnham has raced Big Parade patiently through his career with seven wins and four placings from 14 starts. He has earned stakes of $388,840 and should he be successful on Saturday another $287,000 will be added to that total. Josh Parr rides with barrier five.

The two were first and second in the Group 2 Hill Stakes over 2000m at Randwick on the 2nd. Nash Rawiller rides Think It Over with barrier 11 and James McDonald is up on Shared Ambition, as they both were in the Hill Stakes, with barrier six.

The track is rated a Soft 5 at acceptance time on Wednesday with steady rain throughout Wednesday morning continuing into the afternoon. The rail will be in the True position for the entire circuit.

Sydney’s weather had further rain forecast for Thursday with a possible storm and 10mm to 20mm possible with 24c. Friday’s forecast is for a partly cloudy day, possible showers with 1mm to 4mm and 24c with Saturday mostly sunny with 12c to 23c. 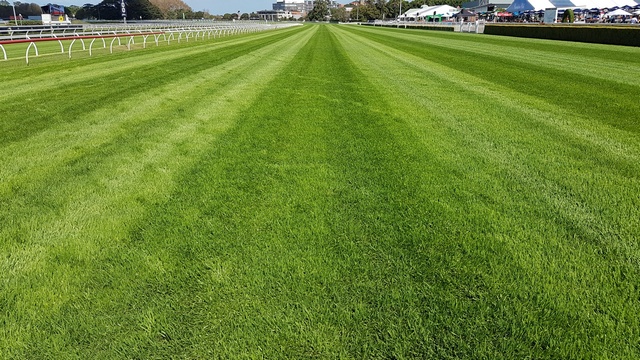 The rail is in the True position for the entire circuit on Saturday, picture ThoroughbredNEWS