Jebel Ali stage their penultimate fixture of the current season on Friday afternoon, seven races officially highlighted by a 1200m conditions contest for 3-year-olds for which eight have been declared, the weights headed by Zhou Storm.

Trained by Ali Rashid Al Rayhi for Elbashir Salem Elhrari, the Due Diligence colt, the only previous winner among the octet, is penalised for a pair of juvenile victories, his first two racecourse appearances, over 1200m at the beginning of November and a month later over 1400m.

Only previously raced on the dirt surface at Meydan, as a 3-year-old he was then stepped up to 1600m, finishing third in the UAE 2000 Guineas Trial before he was fifth in the first colts’ Classic of the season, over the same course and distance. This obviously represents a drop in class and he will be ridden for the first time, at least in public, by Sandro Paiva who said: “I know the horse well from home in the mornings and he is a nice, tough and honest, type.

“We hope the 1200m at Jebel Ali will really suit him, but obviously, he does have that double penalty and is taking on horses with experience of that Jebel Ali hill which he does not.” 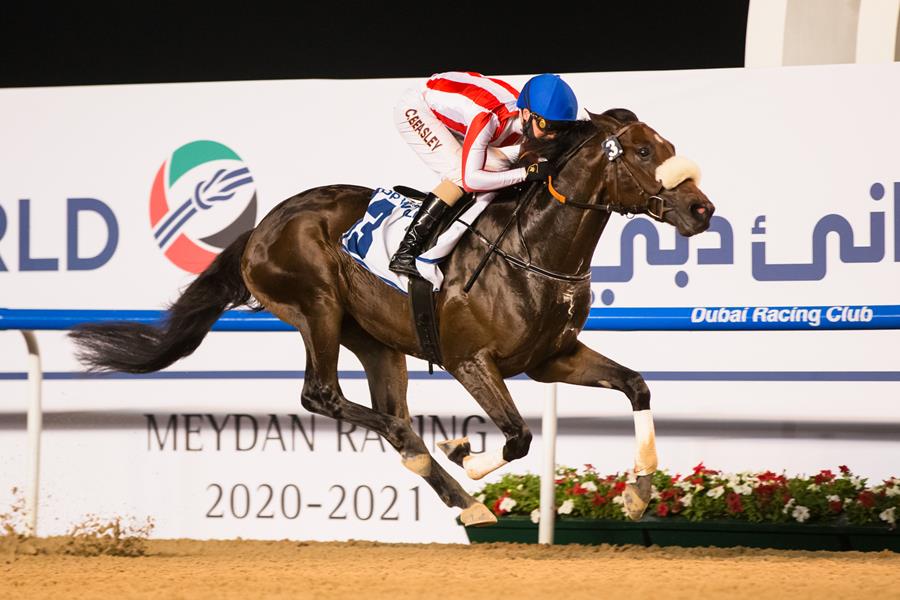 To be saddled by Salem bin Ghadayer, Rare Ninja chased home Zhou Storm on their respective debuts, over 1200m at Meydan, but was then well behind the same rival over 1400m. This will be the seventh career start for the Distorted Humor colt who has been third on both previous visits to Jebel Ali, most recently a fortnight ago.

Royston Ffrench, in the saddle for both previous clashes with Zhou Storm and the colt’s latest two outings, is again aboard. He said: “He ran well over 1400m last time and the return to 1200m should be in his favour. It is a decent little race, but he should be thereabouts.”

One place in front of him a fortnight ago, on his third career start, was No Limits, the Siyouni colt seemingly producing by far his best effort to date. Unraced as a 2-year-old, he showed good early speed last time before headed by Rare Ninja, but showing a willing attitude to battle back to the front, only to be headed close home by Uncle Hamed.

With regular pilot Tadhg O’Shea suspended, Richard Mullen takes over for Satish Seemar in the colours of Nasir Askar.

Rashed Bouresly saddles both Ajmal and Hawa Bilady, the booking of Fabrice Veron for the latter suggesting he is the yard’s main hope. Three of his four career starts to date have been on turf at Meydan, but he was third, over this Jebel Ali 1200m, on his second outing when stablemate Ajmal was only fifth.

The main support race, a handicap over 1800m, looks absolutely wide open and a case could be made for the vast majority of the dozen declared runners.

For Mohd Khalifa Al Basti, Doug Watson saddles both Dehbashi, the choice of Pat Dobbs, and Native Appeal who has the assistance of Sam Hitchcott.

Both are course and distance winners whereas Watson’s third hope, Nasraawy, to be partnered by Jim Crowley for his main employer, Sheikh Hamdan bin Rashid Al Maktoum, is having just his second UAE outing. A fortnight ago, he was staying on well in a 1400m course handicap and, as a 2000m winner in Britain, this extra 400m should suit him.

The mount of Pat Cosgrave for Helal Alalawi, Mystery Land won both his first two career outings, his belated last March and on his reappearance in October, both over 1400m here at Jebel Ali.

On his penultimate start, he made a winning turf debut, over 1600m at Meydan, and is another who looks well worth trying over this Jebel Ali 1800m.

Mullen partners Majestic Thunder for Seemar and Touch Gold Racing, leaving Harry Bentley the spare ride on stable companion Law Of Peace, victorious in his only local outing, a 1600m maiden on the Abu Dhabi turf, almost three weeks ago.

Seemar also saddles Irish Freedom whose only previous Jebel Ali outing was a well beaten eighth in the 1950m Listed Jebel Ali Stakes of 2020, just over a year ago.