This Sunday Tokyo Racecourse hosts its third top-level competition in as many weeks and the second week in a row that the main event showcases females. This week it’s the 81st running of the filly classic Yushun Himba (Japanese Oaks), a Grade 1 2,400-meter turf event and the second race in the filly triple crown, which kicks off with the Oka Sho (Japanese 1000 Guineas) in April and ends with the Shuka Sho in October.

Twenty-five 3-year-old fillies have been nominated for this year’s Oaks, which marks the racing tradition’s 81st running. Usually a colorful gala that cuts entrance admissions to lady racegoers and features gorgeous begowned equestriennes on the lead horses, this year will see an Oaks first, the absence of spectators in the stands, as the JRA continues its anti-coronavirus measures.

Only 18 of the nominees will land a berth in the gate, including two of eight hopefuls tied for earnings that will be decided by lot. The winner receives JPY110 million.

The Japanese Oaks does tend to favor the top choices. The top pick on raceday has captured the last four Oaks in a row and half of the last 10 runnings. The second choice has figured in the top three spots seven times over the same period.

Deep Impact fillies hold the most wins of the Oaks at five, and the late Triple Crown champion is the sire of nine of the Japanese Oaks nominees. But, new blood is in the mix and first-crop progeny have already landed two of the first three 3-year-old Grade 1s this year. Daring Act by Epiphaneia took the Oka Sho and Lauda Sion, a son of Real Impact, won the NHK Mile Cup. Of the 25 Japanese Oaks nominees, eight are first-crop daughters. Ablaze is one of five nominees sired by Kizuna, who won the Tokyo Yushun (Japanese Derby) in 2013. And Gold Ship is the sire of Win Mighty, coming off a first place in the 2,000-meter listed Wasurenagusa Sho, as was last year’s Oaks champion Loves Only You.

A closer look at some of the expected top choices follows.

Daring Tact – Unbeaten and proven over fast and slow going, Daring Tact will take on her first race longer than 1,600 meters and will be racing to the left for the first time. The filly based in Ritto Training Center will also be making her first long trip to the track. Her stupendous win of the Elfin Stakes prompted trainer Haruki Sugiyama to take Daring Act to the Oka Sho and his decision paid off. “From her morning work to the left, I don’t see any problem with the direction, and she should handle the distance if she remains relaxed,” he says. If she wins, she will become only the second filly, the first since Miss Onward in 1957, to pocket two of the triple crown with a pristine record.

Des Ailes – Des Ailes is a Ritto-based, Deep Impact filly whose name means “the wings” in French. And flown she has, after a late debut in mid-March a week after the Tulip Sho. She missed the Oka Sho but arrived at the Oaks gate following her win of the Sweetpea Stakes earlier this month with a final three furlong time of 32.5 seconds. Des Ailes is out of the French-bred mare Avenir Certain, who captured both the French 1000 Guineas (1,600 meters) and the French Oaks (2,100 meters). Trainer Yasuo Tomomichi believes the future of his filly too is certainly looking rosy. “She was calm making the long trip to the track last start and even though her career is short, she has already passed many tests. I think the Tokyo 2,400 meters should suit her.”

Win Marilyn – A daughter of Screen Hero, Win Marilyn is one of three Oaks nominees fielded by trainer Takahisa Tezuka, who is seeking to better his present best fourth-place finish in the Japanese Oaks. Win Marilyn looks to be his best chance after she notched her third win in a four-start career last out with a high-pace victory in the Sankei Sports Sho Flora Stakes. It was her first time at Tokyo and her third win over 2,000 meters.

Miyamazakura – This gray filly by Deep Impact is two for five and broke her maiden over the Sapporo 2,000 in record time. She ran second in the Grade 2 Radio Nikkei Hai Kyoto Nisai Stakes (also over 2,000 meters), then won the Grade 3 Daily Hai Queen Cup over the Tokyo mile before finishing fifth over the heavy track of the Oka Sho. Miyamazakura, trained by the Ritto-based Hideaki Fujiwara, comes to the Oaks directly from the Oka Sho, but given a fast track and the extra distance should fare well. 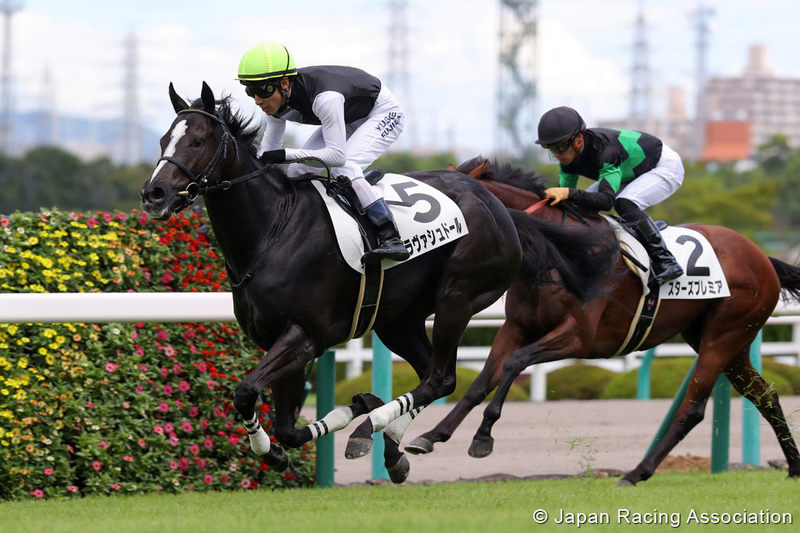 Cravache d’Or – The Heart’s Cry-sired Cravache d’Or has only one win but has yet to finish off the board in her five career starts. She has missed the top three spots only once and has raced at the graded-stakes level in all starts but her debut. Raced solely over the mile, she returns to the track from her fourth-place finish in the Oka Sho. The handling of the extra distance should be the key and her second in her only previous start at Tokyo, the Grade 3 Saudi Arabia Royal Cup, shows she can handle racing to the left. Mirco Demuro is expected to be in the saddle and is gunning to become the seventh jockey to win two Japanese Oaks in a row.

Maltese Diosa – Another filly raced only over the mile until now is the Kizuna-sired Maltese Diosa. Second just a nose ahead of Cravache d’Or in the Grade 1 Hanshin Juvenile Fillies, she went on to win the Grade 2 Tulip Sho, but was hampered by the heavy going in the Oka Sho and finished in eighth place. Trainer Takahisa Tezuka says, “I can’t say anything about the distance but I plan to have her hold back more this time than she did in the Oka Sho.” Though it’s her first time at Tokyo, Maltese Diosa has proven herself racing to the left with both a win and a second-place finish at Niigata.

Others not to be overlooked are:

Ho O Peaceful, a sister to the winner of 2018 Arima Kinen (The Grand Prix) Blast Onepiece, notched her Oaks berth with her close second to Win Marilyn in the Flora Stakes. It was a tough race, with strong winds and traffic problems but this Orfevre daughter showed guts and kept her cool.
The Deep Impact-sired Smile Kana, third in the Oka Sho, is expected to take the lead here and though it will be her first time over anything other than the mile, it will be interesting to see how well she holds her ground over the long Tokyo stretch.
The Deep Impact-sired Sanctuaire beat colts in winning the Grade 3 Nikkan Sports Sho Shinzan Kinen in Kyoto, but was flummoxed by the heavy ground in the Oka Sho, where she finished sixth. A fast track would be a plus for her.
Two for two, the Yasutoshi Ikee-trained Ablaze debuted in February, comes off a win of the Grade 3 Flower Cup at Nakayama and is said to have packed on muscle with the sights set firmly on the Japanese Oaks.