Tokyo Racecourse showcases Japan’s top three-year-old fillies this weekend with the 80th running of the Grade 1 Yushun Himba (Japanese Oaks) on Sunday, May 19.

Commonly referred to simply as “the Oaks,” it is one of Japan’s five “classics” and the second leg of the fillies’ Triple Crown – the Oka Sho (Japanese 1000 Guineas), the Japanese Oaks and the Shuka Sho. The Oaks, at 2,400 meters, is the longest of the three.

Sunday’s event is arguably the toughest test of the three, and the Tokyo 2,400 favors few but the best. Speed and stamina are crucial to conquering not only the distance, but the track’s notorious climb out of the final turn and the longest stretch of all Japan’s racetracks (nearly 526 meters).

This year’s Oka Sho champion Gran Alegria took on the NHK Mile Cup, which means that for the first time in three years and only the 12th time in the race’s history, the Oka Sho winner will not make an Oaks appearance. However, the Oka Sho runnerup Shigeru Pink Dia, third-place finisher Chrono Genesis, and the 2-year-old champion Danon Fantasy are all in the running. Other rising stars include Flower Cup winner Contra Check, Flora Stakes winner Victoria and Sweetpea Stakes victor Curren Bouquetd’or. Hopes are also high for the undefeated Loves Only You, winner of the Wasurenagusa Sho (Forget-me-not Prize).

Twenty-three fillies have been nominated for the Oaks, but only 16 are already assured a ticket. And only six others – Air Gene, Fairy Polka, Gradiva, Iris Feel, Jodie and Meisho Azteca – will be in the drawing for the last two spots. Up for grabs is prestige and over 238 million yen in prize money. The winner takes home 110 million yen.

Last Sunday, the often surprising Victoria Mile surprised once again, with none of the fans’ top three choices finishing in the top three spots. A double-digit choice tagging third helped raise the return on the winning trifecta to over 1,750-fold. The Oaks, on the other hand, tends to be a bit more predictable.

In the Oaks’ last 10 runnings, the race favorite has won half of the time and the last three years in a row. The favorite or second pick has always finished in the top three spots over the past decade, and, over the same period, no longshots have made the money. That’s not to say a wager to win always translates to pocket change. Ninth pick Meisho Mambo brought home a 28-1 return on a wager to win in 2013 and 7th pick Erin Court returned over 37-1 to win in 2011, the year the trifecta topped 5,480-1. 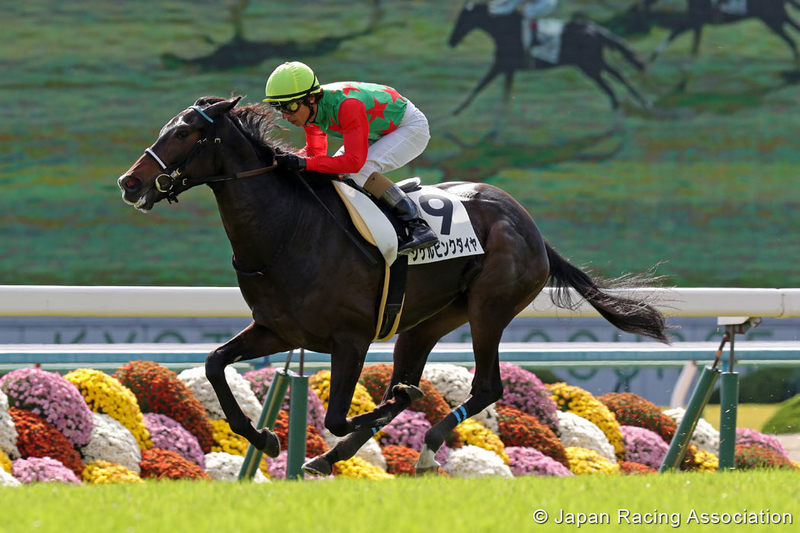 Here are some of the more interesting contenders.

Chrono Genesis – Chrono Genesis, sired by 2004 Arc champion Bago, is 3 for 5 and has never finished out of the money. Second by half a length to Danon Fantasy in the Grade1 1,600-meter Hanshin Juvenile Fillies, she started off the year with a win of the Daily Hai Queen Cup (1,600, G3) at Tokyo before missing second by a neck in her last race, the Oka Sho. This will be her first time at 2,400 meters, but her first two races, both wins, were over 1,800. All five of her starts thus far have been run at a slow pace, much as is expected in the Oaks. She is expected to be able to go the distance. Trainer Takashi Saito says, “She got bumped in the backstretch twice in the Oka Sho and couldn’t get a good position. Then in the stretch she was forced to run on the outside and it made for a tough race. She’s an honest runner. I think the Tokyo 2,400 will suit her. I’m hoping for a smooth run.”

Loves Only You – Unbeaten in her three career starts thus far, the Deep Impact-sired Loves Only You returned this year after a 4 1/2-month layoff, and won the Wasurenagusa Sho (2,000, listed). She lost ground out of the gate but quickly recovered under Mirco Demuro, advanced up the outside and sped down the stretch to top the field by 3 lengths despite interference. Unfortunately, she was unable to get a berth in the Oka Sho. Loves You Only is the sister of Dubai Turf (1,800, G1) winner Real Steel and the Oaks distance is not expected to pose a problem. She already has experience at distances from 1,600-2,000 meters but will be running to the left and at Tokyo for the first time. It will be her first haul eastward from her Ritto base as well. If she can make the winner’s circle, Loves Only You will become only the fifth unbeaten filly to do so. Demuro is expected to have the ride and riding on his fifth Oaks bid is his chance to complete a sweep of Japan’s five classic races, something that has only been done by nine jockeys before.

Contra Check – One of two fillies fielded by Kazuo Fujisawa, the Deep Impact-sired Contra Check is another that has never finished further back than third. At 3 for 5 she nabbed her first graded stakes race last out with victory in the Flower Cup (1,800, G3) at Nakayama and with it, insured sufficient earnings to make the Oaks lineup. Her three wins have all been wire to wire and all her races were won easily, with margins ranging from 2 1/2 lengths to 7. She has never raced to the left, but the sweeping curves of Tokyo should allow her to run her own race. Contra Check is out of Rich Dancer and is a half sister to Bounce Shasse, a three-time Grade 3 winner at 1,800-2,000 meters who finished third in the 2014 Oaks. Australian rider Damien Lane, who rode the winner in the Victoria Mile last week, is expected to have the ride.

Danon Fantasy –This daughter of Deep Impact debuted with a second-place finish, then won her next four outings in row, including the 2-year-old top race for fillies, the Hanshin Juvenile Fillies. She started the year in style with victory in the Grade 2 Tulip Sho, then went to the Oka Sho gate as the favorite but finished fourth 0.4 seconds behind the winner. Raced nearly exclusively at the mile, Danon Fantasy made her debut at Tokyo, but key will be whether she can handle the distance. She’s trained by Mitsumasa Nakauchida, who currently tops Japan’s trainers for winning percentage.

Shadow Diva – Shadow Diva is 2-2-1-3-4-2, with her last two finishes in graded-stake events. She’s been raced nearly exclusively over 2,000 meters and is coming off a second by a nose in the Grade 2 Sankei Sports Sho Flora Stakes at Tokyo, which won her a ticket to the Oaks. By Heart’s Cry, the extra distance should not pose a problem. Trainer Makoto Saito says he’s had his sights on the Oaks from her debut.

Shigeru Pink Dia – Runnerup in the Oka Sho, this Daiwa Major girl has one win, two seconds and a third in four starts, all over the mile. An excitable filly, how she’ll weather the trip to the track from Ritto will be key. Trainer Kunihiko Watanabe says he’s planning to race her in a double hood in hopes of keeping her calm and concentrating on the work at hand.

Also of interest is Kazuo Fujisawa’s other runner Schon Glanz, who is being given her first race over 1,800 meters. A half sister to 2017 Oaks winner Soul Stirring, Schon Glanz captured the Artemis Stakes (1,600, G3) at Tokyo but her last three starts at the mile ended in 4-5-9. She has good late speed and the extra distance may be welcome. Distance may be what the Victoire Pisa-sired Aile Voix seeks as well. She has wins at 1,800 and 2,000 meters, experience at Tokyo and her strongpoint is her stamina. Also by Victoire Pisa is Victoria, who aced her first race over 2,000 meters in winning the Flora Stakes at Tokyo last out. Her dam Black Emblem ran fourth in the Oaks and won the Shuka Sho in 2008.The Kurofune-sired Beach Samba was fifth in the Oka Sho, her only race out of the top three, and ran second in the Queen Cup at Tokyo.