Yulong Edition does it again

Irish import Yulong Edition keeps stepping up to the mark after he posted another commanding win at Kranji on Friday night, his second in a row.

The five-year-old was never in doubt once he took up his customary role of leader in the small eight-horse field in the $85,000 Class 2 race over the Polytrack mile.

All of Yulong Edition’s six wins at Kranji have been recorded in that registry, with, interestingly, a different jockey each time. Champion jockey Vlad Duric was in the plate on Friday, and it would have taken a very good horse to upend that lethal combination. 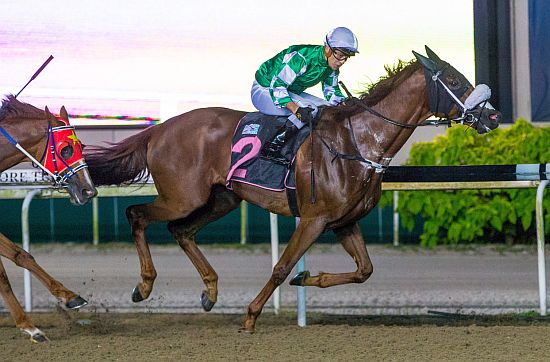 Karisto (Patrick Moloney) was about the only adversary who could spoil the party, as he came chipping away at the margin inside the last furlong, but Mark Walker’s bold frontrunner staved him off comfortably one length away.

The quinella was an all-Chinese affair with both owned by two of the most powerful racing outfits from Mainland China. Yulong Edition is raced by the Yu Long Stable while Karisto carries the red and yellow silks of the China Horse Club.

Per Inpower (John Sundradas) showed a welcomed return to form with an eye-catching third another 1 ¾ lengths away. Sent out at $7, Yulong Edition clocked 1min 38.76secs for the 1600m on the alternative track.

Walker, who was ending a lean trot of sorts, having not saddled a winner since Sacred Gift on March 13, said Friday’s win was more or less expected, but the way the Makfi five-year-old has come by leaps and bounds has been a pleasant surprise.

“This horse keeps stepping up. He’s surprised us a lot,” said the Kiwi handler.

“He’s still a quirky horse, like he’s still a bit of a funny horse in the barriers, but he’s in very good form.

“Tonight, I told Vlad to just jump him out well, if somebody else goes crazy, to just let him go. Vlad summed it up perfectly, and the horse was quite strong at the end.

To add more merit to the win, Duric said that the ride felt more like a “track gallop”.

“He got a nice lead, it felt more like a track gallop. He’s a very in-form horse,” said the three-time Singapore champion jockey.

“Mark has done a great job with him. He has spaced his runs well and he’s thriving.”

“It was a good solid win. He could be a Gold Cup horse at the end of the year.”

The Group 1 Singapore Gold Cup (2000m), the third Leg of the Singapore Triple Crown series, is slated for the end of the year on November 11, but Walker was abstaining from mapping out any long-term plans for Yulong Edition given the dark clouds hovering above the racing industry in the wake of the COVID-19 outbreak, especially with the Singapore Prime Minister Mr Lee Hsien Loong announcing on Friday that all workplaces would close from next Tuesday, except for essential services.

“We won’t get too ahead of ourselves with any horse right now. We’re just very grateful we’re still racing even if we’re not sure how long it will last,” said the three-time Singapore champion trainer whose own native New Zealand has temporarily closed down its horse racing.

“It’s good to get a win tonight. We’ve had a few placings, but our horses are still ticking over nicely.”