Japanese trainer Yoshito Yahagi admits it would be an “honour” if King Hermes can turn a dream that first materialised 32 years ago into reality and continue what has been a whirlwind 12 months by securing victory in the Darley July Cup at Newmarket on Saturday, day three of the Moët & Chandon July Festival.

The Lord Kanaloa colt will bid to become the second Japanese-trained runner to win the prestigious Group One prize, which has a published value of a record £600,000 this year, 22 years after Agnes World provided the country with victory in the prestigious sprint back in 2000.

King Hermes continued his preparation for his next assignment under big race rider Ryusei Sakai this morning when taking part in a five-furlong gallop in front of Yahagi at the July Course.

Victory in the Darley July Cup would be particularly special for Yahagi, who admits his affection for Newmarket started back in 1990 during a stint with the late July Cup-winning trainer Geoff Wragg.

Yahagi said: “I specifically love the July Cup and the July Course. It would be an honour (to win it) and I would be very pleased if that fortunate thing could happen.

“I would like to bring more horses to run in the UK as I spent three months working in the UK with Geoff Wragg 32 years ago under a scholarship to see how things happen with the horses here.

“I’ve always dreamed of having a winner of the July Cup. That is how much I like the race and the racecourse that is why I’m looking forward to it.” 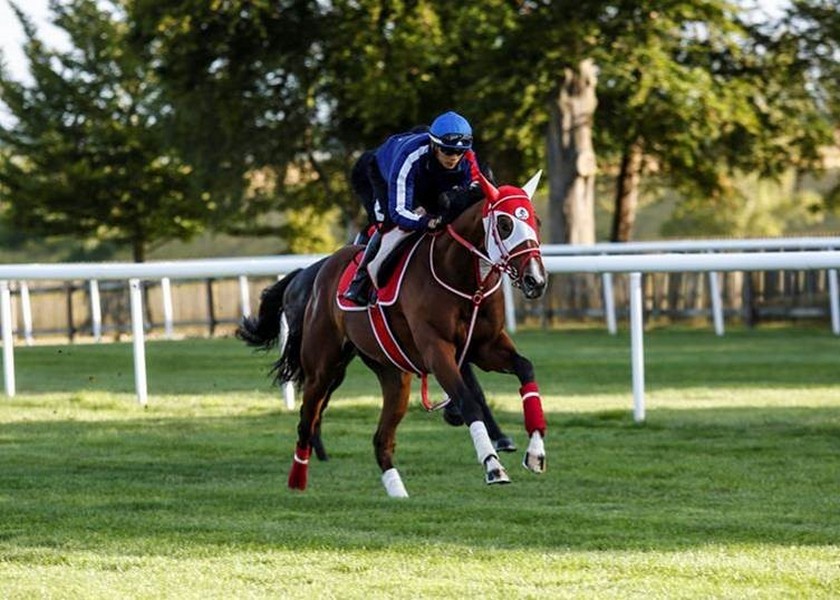 King Hermes working on the July Course on Tuesday, picture The Jockey Club

With only five starts to his name King Hermes, who will be the fourth Japanese horse this century behind Agnes World and Seeking The Dia (12th, 2004) and Keeneland Swan (12th in 2005) to contest the race, is one of the least experienced runners in the field.

However, Yahagi has plenty of confidence that both King Hermes and Sakai, for whom this will be a first ride in Britain, can give a good account of themselves after watching the pair in action today.

Yahagi, who last had a runner in Britain when Deep Brillante was eighth in the 2012 King George VI & Queen Elizabeth Stakes at Ascot, said: “I was a bit conscious that the horse lost his speed in the last furlong, but maybe that was because of the hill. This work will make the horse understand how to run on the day.

“I was worried about (the lack of experience he might have) but after seeing the horse today I’m quite confident he will manage the July Cup.

“It is the first time the jockey has ridden in the UK. Because of visa issues, it is his first time here. He has experience riding in Dubai, Saudi Arabia, Australia and France so I’m not worried about that.”

Since becoming the first trainer from Japan to secure a winner at the Breeders’ Cup with Loves Only You in the Breeders’ Cup Filly And Mare Turf in November last year, Yahagi has subsequently enjoyed a number of notable foreign big-race successes.

After adding a second Breeders’ Cup win to his name with Marche Lorraine in the Breeders’ Cup Distaff, Yahagi has landed the Hong Kong Cup with Loves Only You plus a treble on Dubai World Cup night at Meydan courtesy of wins for Panthalassa, in the Dubai Turf, Stay Foolish in the Dubai Gold Cup and Bathrat Leon in the Godolphin Mile.

Having raced over a mile on his last two starts King Hermes will have to prove he can cope with reverting back to six furlongs for the first time in more than a year if he is to add his name to that list. However, Yahagi believes the drop back in trip will be no issue.

Yahagi added: “My idea for the ideal distance for the horse is seven furlongs but since you have the incline, maybe the six furlongs will be good for the horse.

“After Dubai, maybe in April, we identified the July Cup as a target.

“It is really difficult to compare him to Agnes World as he was a very nice sprinter. This horse is young and inexperienced so we are just looking forward to what is going to happen on July Cup day.”

The Darley July Cup is part of the QIPCO British Champions Series.