Yes Yes yes to The Everest

The Chris Waller stable announced on Thursday afternoon that as expected the three-year-old Rubick colt Yes Yes Yes will race in the Chris Waller Racing slot for The Everest (1200m) at Randwick on October 19th.

In a statement the stable said that they reached an agreement with the owners of Yes Yes Yes to take the slot that had previously been allocated to Enticing Star.

When Enticing Star did not feature in the Group 2 Golden Pendant over 1400m at Rosehill on September 28th owner Bob Peters withdrew that Testa Rossa mare and retired her to stud giving the Waller stable the opportunity to find a new runner for the slot.

“I have been extremely excited by the way this colt has continued to progress through his short career to date. I have been incredibly pleased with what he has shown me over the past six weeks and am extremely confident he can acquit himself under weight for age conditions against an outstanding field of open age sprinters. Yes Yes Yes is an exceptional talent and I am eager to see him perform in The Everest," said Waller.

“I am absolutely delighted that we have successfully secured an Everest slot for our colt, Yes Yes Yes. He is undoubtedly an elite three-year-old and importantly still on a steep upward trajectory. We are honoured to have been selected by Chris Waller to take our place in this great race and have every confidence that he will acquit himself with distinction," said managing part owner Brae Sokolski.

“Coolmore Australia and our racing partners are delighted to team up with slot-holder Chris Waller in running Yes Yes Yes in the Everest. Chris knows the horse better than anyone and his confidence in him only confirms our belief in the horse. From Coolmore’s point of view, it is also very exciting that leading young sire Rubick will be represented in the world’s richest turf race by a member of his first crop," said part-owners Coolmore.

Yes Yes Yes has raced seven times for three wins including the Group 2 Todman Stakes over 1200m on a Heavy 8 track at Rosehill in March. After that run he was seventh in the Group 1 Golden Slipper over 1200m from barrier 16. He was 15th at the 400m and came home to be 5 1/2L from the winner Kiamichi.

In two starts this campaign Yes Yes Yes has run second twice to Bivouac, first in the Group 2 The Run To The Rose over 1200m at Rosehill when he was 2L from the Godolphin colt, and secondly in the Group 1 Golden Rose over 1400m on the 28th when he was a short neck from the winner.

Following the announcement Yes Yes Yes has shortened with TAB from $13.00 to $11.00 in their Everest market.

Ten of the 12 slots have been filled with Godolphin yet to confirm their runner, while the winner of Saturday’s Group 2 Schillaci Stakes (1100m) at Caulfield is assured of a berth via the Melbourne Racing Club.

TAB’s representative, five-time Group 1 winner Santa Ana Lane, is currently the $4.60 favourite at TAB ahead of Pierata ($5) and Arcadia Queen ($6).

Redzel has won the first two editions of the TAB Everest and is presently a $9 chance.

The latest TAB ODDS as at late Thursday afternoon:

Confirmed runners have (S) alongside them 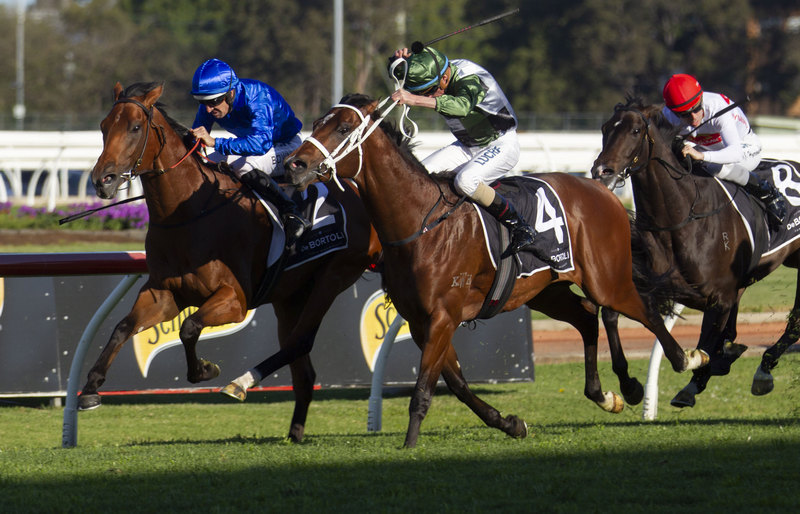 Yes Yes Yes outside Bivouac in the Group 1 Golden Rose over 1400m at Rosehill on September 28th, picture Sportpix.com.au