The Sandown Cup meeting staged at Caulfield on Saturday, and in a new time slot a few weeks after the Melbourne Cup Carnival, lived up to its usual high standards. There were horses to follow in the New Year in even stronger grade, and those which should find things a little easier over the coming summer months…

The final race of the day witnessed two very capable imports fight out the finish when SINAWANN (IRE) got the better of I AM SUPERMAN (IRE) in the closing stages after a very keen pace had been set from the outset of this genuine Group 3 contest.

Ridden well back off a fast speed, Sinawann (Ire) lived right up to his very good overseas form in which the lightly-raced son of Kingman had opposed the likes of acclaimed Group 1 winners Japan, Armory, Siskin and Mogul in notable events back in Ireland.

Having only his second start for Anthony & Sam Freedman, Sinawann (Ire) relished the tempo of Saturday’s contest and almost certainly provided a taste of what’s to come in the autumn. He looks a high-class prospect for one of the most potent stables in the country and there’s bigger and better things to come if Saturday is any sort of guide.

Backers of I Am Superman (Ire) should consider themselves a bit stiff as the smart 6-year-old proved to be the perfect ‘bunny’ for the winner to chase into the straight when making his final move. The Peter & Paul Snowden trained galloper now looks a specialist 1400-1500 metres performer and is sure to be managed well going forward by one of the shrewdest stables on the eastern seaboard. 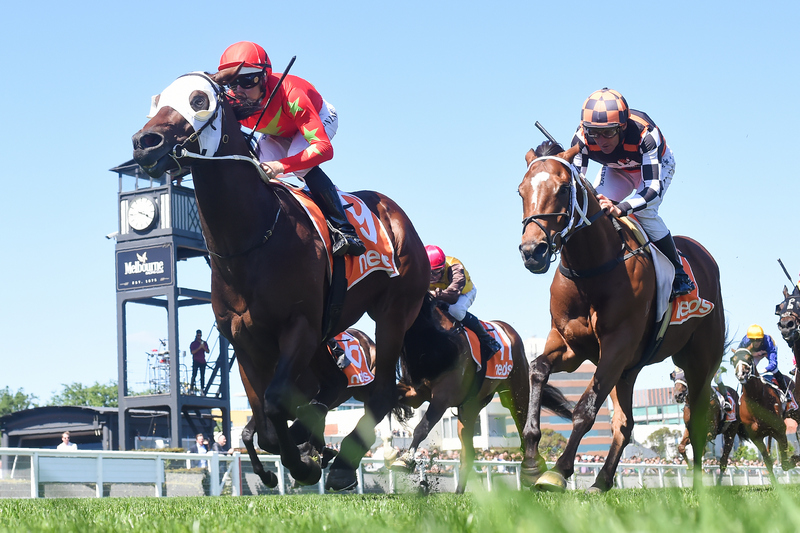 BLUE ARMY (NZ) won the Group 2 Sandown Guineas in the style of a good Sandown Guineas winner and might well turn out to be every bit as good as his highly regarded predecessors.

Given a perfect ride by Damian Lane, the lightly-raced son of Savabeel reciprocated with a hugely promising performance at just his third career start for the all-conquering Mick Price & Michael Kent (Jnr) stable.

While it is important not to get too carried away with his win (as the runner-up was beaten in a Class 1 at its previous outing and the minor placegetter is yet to win in the city after 14 starts), Blue Army (NZ) looks to have plenty of upsides for the remainder of his 3-year-old season and beyond.

Probably more than anything however, the win of Blue Army (NZ) in the Sandown Guineas again illustrated what a fantastic judge senior co-trainer Mick Price is to land a Group 2 feature with a last-start Warrnambool maiden winner.

The manner in which STEINEM (GB) fought back to win the Group 3 Summoned Stakes (1600m) was a clear indication that the imported daughter of Frankel is just beginning to hit her straps and has plenty more to offer in the coming months.

While a 3kg pull in the weights with runner-up Quantum Mechanic obviously played its part in the mare’s win, her resolve over the final 100 metres and determination to pass the winning post first was the stamp of a racemare who should be winning in even better grade in 2022 — most likely over 2000 metres or even further still.

The Frankel breed is really making its mark on Australian racing, what with the likes of Group 1 winners Hungry Heart and Converge having also been developed locally just as in the case of Steinem (GB). Saturday’s Summoned Stakes victory might well go on to prove a stepping-stone to an even more significant victory when next in work.

BONVICINI should have probably have gotten ‘the chocolates’ when appearing an unlucky runner-up in the Group 3 Eclipse Stakes over 1800 metres. Ridden by inform hoop Jye McNeil, the 5-year-old mare hit a major traffic snarl when searching for a run up the fence before flying home over the closing stages to be beaten a Long Neck.

Though still winless in five starts this campaign, Bonvicini’s form is very respectable and should not have any difficulty standing up over the summer months if connections decide that keeping her in work is their best option.

By the same sire as Ciaron Maher’s celebrated staying mare Jameka, Bonvicini had little trouble getting the 1800-metre trip of the Eclipse Stakes and should be capable of saluting over 2000 metres or even further in the hands of the best distance training partnership in our national ranks at this present time.